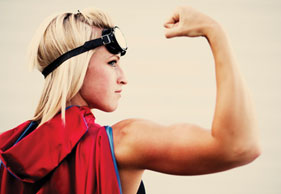 Any male long distance runner will admit to having felt frustrated when more than one, often petite, female runner passed them somewhere between the 60-70km mark at Comrades. Often many runners contribute this to a theory that women are better long distance runners than men. But is this true? Modern Athlete asked sports scientist, Dr Ross Tucker, to give us some insight on the topic.

Does a woman really get better than a man as an event lengthens? Of course, comparing one woman to one man is a very different debate than the question of whether women as a sex are better than men as distance increases.

THE RESEARCH
About ten years ago in an attempt to answer this question, scientists from UCT looked at a large group of runners from the Two Oceans and Comrades Marathons. They established what the runners’ best performances were at distances ranging from 5km all the way up to Comrades.

The findings showed that if you looked at the same people across a range of different distances, you would find that the running speed is higher in men from 5km to 56km, but that the gap between men and women decreased progressively, until eventually, at Two Oceans distance (56km), the men and women ran at the same speed. Go one step further, to Comrades distance, and the women would be found to be faster than the men.

Again though, it is important to remember that we need to look at the same person across a range of distances, not just at the fastest single person in each event. In other words, the question is whether a woman, who runs as fast as a man over shorter distances, is more likely to catch up over longer runs. And the answer is a resounding yes!

THE IMPLICATIONS
It would seem that the answer to this question is obvious because men have physiological advantages such as testosterone, more muscle, lower body fat, larger hearts, more oxygen-carrying red blood cells, etc, and these are likely to have an effect in shorter events. As the distance increases, however, those advantages are eroded and so a woman who is comparable over a shorter distance will come into her own over the longer distances.

Take the example of Bob and Alice, who both regularly do club time trials. If they run a 5/8km time trial in the same time, then whenever they run a 21km race, the safe bet is that Alice will win, as she becomes relatively stronger as distance increases. If they both ran Comrades, the same would apply. The really interesting thing is that this theory works most times, assuming that the run goes according to plan. On the whole, women who are reasonably close to men in terms of time in shorter races will find that they get to lead the way in the ultras.

THE REASONS
During ultras, the body’s main source of energy is fat because the carbohydrate stores are limited in volume. Women have greater energy reserves to call upon and may even be better at making use of the energy that is available. At shorter distances this is not a concern, since carbohydrates like glycogen are the main source of energy. Besides, the strength advantage possessed by men as a result of larger muscle mass makes them the kings of shorter distance.

The second reason involves differences in pacing strategy. In the fascinating research conducted, it has been shown that women tend to pace themselves more evenly than men, and seem to be less affected by external factors (crowds, friends, rivals) than men! In one study, researchers tried to confuse runners by manipulating a clock to run either faster or slower. The women were not fooled; they went about their business as usual. The men, however, ran either five minutes longer or five minutes shorter over a period of approximately 30 minutes of exercise.

Do women have a more finely-tuned internal clock that allows them to judge distance and pace? Research still needs to be concluded, but when you watch races on TV, the hordes of men who surround the lead women (often to get onto TV) benefit enormously from the steady pace they set.

So that’s it in a nutshell. More than likely, women will never catch up to and beat men at the very top level. But women do seem to have a ‘relative’ advantage over longer distance events and get progressively better than men as the distance increases for each person. The bottom line is that we all have strengths as runners – for women, it’s likely to be longer distance events.