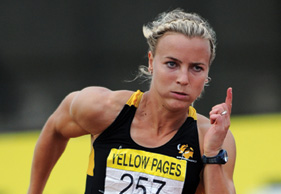 Heptathletes are seen as among the most talented in the track and field discipline, as they have a variety of skills such as strength, speed, mobility and endurance. It takes a superior all round athlete to not only compete in seven heptathlon events, but to excel at all of them. Janet Wienand, South Africa’s new heptathlon champion, is one such an athlete. – BY MICHELLE PIETERS

Most athletes can only specialize in one discipline at the highest level and those who choose to take on more than one, generally limit this to a maximum of two or three events. Multi-discipline sport is not for the faint hearted. It requires a multitude of talent over several disciplines and above all, lots of hard work and hours of training!

Heptathletes are generally seen as amongst the strongest, fittest and most talented track athletes. They compete in seven events over two days: 100m hurdles, high jump, shot put, 200m sprint, long jump, javelin throw and 800m, with the first four contested on the first day, and the remaining three on the second day. It is a sport that only a handful of talented women worldwide take on.

BORN TO COMPETE
Being crowned the SA champion is nothing new to 24-year-old Janet Wienand, who at the tender age of nine was South Africa’s own junior 60m hurdles champ! Janet grew up in the Free State and sport has always been in her genes; her father, Boet, and grandfather were both provincial rugby players. It was inevitable that Janet would get involved in athletics as she was best friends with the children of a neighbour who was an athletics coach. She competed in high jump and hurdles in primary school but it was in high school that hurdles found a special place in her heart.

After school Janet qualified as a biokineticist at the Northwest University where she was coached by Dr Ria van den Berg, who had also coached South African top hurdler, Ockert Cilliers.

During this time Janet dominated the hurdles scene at Yellow Pages and South African track events, and established herself as one of the country’s best 400m hurdles athletes. She was crowned as the SA 400m Hurdles Champion four times in a row (2006-2009). And in 2006 she also took the African Champion title. Although her best time of 55.81sec placed her amongst the top South African athletes, compared to international standards it was unfortunately just not good enough.

TIME FOR CHANGE
Janet met Cyril Lawless, her husband, in Potchefstroom where he was coaching. They reviewed her career and decided it was time to give heptathlon a try. “I specialised in hurdles for seven years and I must admit, I was getting a little bit tired of it. At the same time I was also realistic and realised I would never qualify for top international meets or for the Olympics. I had to evaluate if it was worth carrying on with a career in hurdles.”

Heptathlon always seemed like a lot of fun and like something Janet wanted to try. She knew she had the speed for the running events. Long jump and high jump were not unknown territory, but she had no experience in the javelin and shot put field events. “I was a bit of a tomboy at school and could always throw stones very far. I thought if I could throw a stone that far, I could throw a javelin even further! So I decided to give it a go. I know I took a chance but looking back now, it paid off.”

Janet made the move to heptathlon at the end of 2009 and less than four months later, she was crowned the new SA champion!

SEVEN TIMES THE TRAINING
Training for a heptathlon is time consuming and can be exhausting. Fortunately Janet, who moved to Stellenbosch in 2008, has flexible working hours at the biokinetic practice she works at. “My boss is also a good sportsman, so he understands where I am at.”

Hurdles and high jump are naturally Janet’s favourite disciplines but she admits to still battling with the technique required for javelin throw and shot put. “Heptathlon is hard on your body. You have to excel at all the events and you can’t just be average. There are only a few athletes who can do this. What I sometimes find the hardest is being able to focus in between events. One needs to focus on each discipline but you also need to switch off between events. Often when you don’t perform well in one discipline, you feel a bit down and need to motivate yourself to perform in the next event. Heptathlon is sometimes emotionally more exhausting, than physically!”

Depending on the programme, heptathletes usually have an hour’s rest between disciplines. They are not allowed to leave the track. In each event the athlete scores points for performance according to scoring tables issued by the IAAF. The athlete accumulating the highest number of points wins the competition.

Janet trains six days a week and a minimum of three hours a day.

• Monday: Track training (Repetitions of 200m or 800m sprints).
• Tuesday: The day starts off with a gym session where she concentrates on strengthening her legs. The afternoon is reserved for javelin throw and high jump.
• Wednesday: Back to the track for repetitions of 100m and 200m sprints.
• Thursday: More sprint repetitions on the track (200m or 800m).
• Friday: Long jump in the morning and a gym session concentrating on strengthening the upper body.
• Saturday:  Hurdles followed by shot put.
• Sunday:  Rest!

DISAPPOINTMENTS AND HIGHLIGHTS
“I was disappointed every time I could not make the Olympic qualifying time in the 400m hurdles. I also battled with a foot injury in 2007 and 2008, but fortunately that is over now.”

There have been many highlights in Janet’s career, such as the time she was crowned the 2006 African Champion in the 400m hurdles event. The biggest highlight up to now has definitely been winning the SA Heptathlon Champs in the very first year she participated in this sport.

“I love heptathlon! There is never a dull moment and you always have more than one chance to achieve. With hurdles you only have one chance; if you slip up, your race is over. With heptathlon you can make up for mistakes,” says Janet, who was the Boland and Maties Athlete of the Year for 2009.

DREAMS OF THE FUTURE
Janet’s short term goal is to compete in the Commonwealth Games in India in October. Her long term goal is the same dream all athletes have: the Olympic Games in 2012! “I would love to finish in the top eight at the Olympics in London.”

But for now Janet is enjoying her honeymoon in Mozambique and taking a well-deserved break before returning to burn up the track and field scene in South Africa!

THE HISTORY OF HEPTATHLON
The name heptathlon derives from the Greek hepta (seven) and athlon (contest). The heptathlon has been contested by female athletes since the early 1980s, when it replaced the pentathlon as the primary women’s combined event contest (the javelin throw and 800m were added). It was first contested at an Olympic level in the 1984 Summer Olympics. In recent years some women’s decathlon competitions have been conducted, consisting of the same events as the men’s competition, and the IAAF has begun keeping records for it. But the heptathlon remains the championship level combined event for women. Jessica Ennis is the current world champion.

There are two versions of the heptathlon. The first is an outdoor competition for women, and is the combined event for women contested in the Athletics programme of the Olympics and in the IAAF World Championships in Athletics. The IAAF World Combined Events Challenge determines a yearly women’s heptathlon champion.

The other version is an indoor competition, normally contested only by men. It is the men’s combined event in the IAAF World Indoor Championships in Athletics. The men’s indoor heptathlon consists of the following events, with the first four contested on the first day, and remaining three on day two:
• 60m
• Long jump
• Shot put
• High jump
• 60m hurdles
• Pole vault
• 1000m
(Source: Wikipedia)