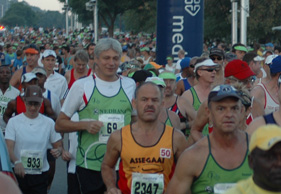 The 33rd running of the Medihelp Sunrise Monster started precisely at sunrise (06h08) on Saturday 13 March, from the Harlequin Club in Pretoria. This Groenkloof based race started in clear and cool conditions, and true to form took in a good few hills in the neighbourhood’s undulating suburbs.

The event consisted of the 32km Sunrise Monster, the 10km Mini-Monster and a more leisurely 5km baby monster fun-run for the not so adventurous. A total of over 5000 participants, including running legend Bruce Fordyce, competed in the three events, The organisers staggered the three race start times to overcome any early morning runner congestion.

This was the third consecutive year that Medihelp medical scheme has sponsored the event and with their support the race has gone from strength to strength, with an annual increase in the number of participants over this period. The sponsor also provided lucky-draw cash prizes to participants and spectators during the morning.

Runners in the flagship 32km race started at a brisk pace and it was not long before the eventual winner, George Mofokeng of Transnet, broke away in the off-road section in the Groenkloof Nature Reserve. He set up a sizable lead in front of the bemused buck and deer in the reserve.  He was never challenged thereafter and broke the tape in 1:50:30, almost 7 minutes ahead of the next finisher!

The ladies race was won by Louisa Leballo of Gauteng Striders, who showed the rest of the ladies the way over the hilly route before finishing in a respectable time of  2:14:55. The men’s and ladies prize winners in the 10km event went to Nedbank runners  Lucky Miya (32:37) and Rutendo Nyahora (37:55).

Spectators at the finish were kept busy with entertainment and food and drink stalls as well as a special children’s area with jumping castles and face-painting. The event was fortunate to have the professional services of NETCARE911 as the medical support team. The presence of the roving NETCARE911Helicopter and Ambulances stationed at the venue provided spectator value in between attending to the medical situations which arose.

Unfortunately the cool weather conditions did not prevail throughout the morning, and the back markers had to deal with hot conditions towards the end of the race. However, thirsts were quenched with an adequate supply of ice cold fluids along the route and upon completion of the race at Harlequins.
All finishers, including the fun-runners, received commemorative medals for their respective events as well as a quality drawstring goody bag with the compliments of the sponsor, MEDIHELP.