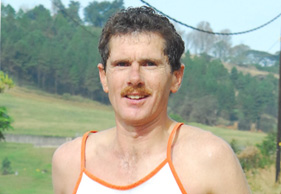 Langebaan on the Cape West Coast is more than just a holiday town with a glorious lagoon where every form of water sports can be enjoyed. Situated about 100km north of Cape Town, it is also the gateway to the West Coast National Park, often referred to as the ornithological capital of South Africa due to the vast number of bird species found here. It is estimated that each cubic centimetre of the lagoon’s wetlands contains 60 million living organisms, making this one of the most biologically productive areas in the world. It’s a stunning natural paradise – and a lovely setting for a road race!

At 5am the 1000 marathon runners got onto 17 busses at the finish point in Langebaan to take them to the start on the other side of the lagoon. After a 50-minute drive, the runners were greeted with coffee and rusks on the Atlantic Ocean beach of Tzaarsbank inside the West Coast National Park.

The race started at 6:30am, a few minutes before sunrise. As the sun rose, the runners came over the hill at the 3km mark to be greeted by an awesome view of sunbeams reflecting on a 10km-wide lagoon. With no cars allowed inside the park, only ostriches and the odd tortoise and the most festive water stations kept the runners entertained.

A trademark of this marathon is its food tables, with potatoes, bananas, sandwiches, chocolates and jellie beans on offer. The 36km water and food station is also the 15km station for the half marathon runners, and there is even beer provided for the extra thirsty runners needing ‘liquid courage’ before tackling the ‘Black Mamba’. This is the infamous, very steep 600m climb at the 39km mark! Thankfully, from there it is all downhill to one of the most scenic finishes overlooking the lovely lagoon.

The marathon was won by three-time Comrades winner Vladimir Kotov, who said he wanted to run a relaxed race without his watch – and then came within one minute of the course record with a time of 2:31:13, going faster than his pending Western Province masters men’s record. (Earlier in the week he set a new master’s record for 10km, but his winning time in Langebaan won’t count for the record books because the course is point to point and thus not record-eligible.) In his post-race interview, Vladimir announced that “this is the best marathon in the country!” Sandra van Graan won the women’s race in a time of 3:10:02.

The half marathon saw some 900 runners lining up this year under the start banner hoisted between two hobie cat boats in Langebaan. The circle route, also mainly inside the National Park, is nearly as scenic as the marathon route. The runners head out on a gravel road for the first 9km, then hit the tar as they pass a bird hide, some historical dwellings and more wildlife before the turnaround back into the town – but not before the ‘Mamba’ has been conquered!