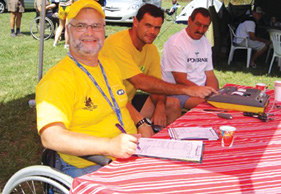 Alen Hattingh has been involved in running for over 30 years. “What is so unique about that?” you may ask. Well Alen has not been fortunate enough to run races for most of his life like many of us reading this article have been, but he is one of the most passionate, committed and true Modern Athletes you will find at a local running event. We share his incredible story. – BY MICHELLE PIETERS

Before his first Comrades Marathon in 1973, he was involved in a tragic accident on Fields Hill, part of the very same route he was planning to run just a couple of weeks later. The accident left him paralysed and destroyed his dream of ever running again. But one thing it did not destroy was his passion for running. He looked to find other ways to get involved in the sport he loved so much. Today Alen is one of South Africa’s most well-known and loved race referees.

They were both in high spirits and looking forward to the Bluff Marathon the next day. Alen had just started his long distance running career and Ian Swan, his brother-in-law, was going to second him on the marathon, which was part of the training for his first Comrades.

While travelling from Ladysmith to Durban they were chatting about life when they reached Fields Hill in Pinetown. Suddenly, the car behind them smashed into their vehicle. Alen was flung out of the back window and Ian was killed instantly. Disgustingly, the driver of the vehicle sped away and was never caught. By coincidence, Alen’s doctor, who was also his running buddy, was travelling behind them and came across the accident scene where he stopped to assist. Alen was rushed to hospital. The date was 17 March 1973 – St Patrick’s Day – a day that changed Alen’s life forever… but it did not destroy his passion for life and sport.

SIX MONTHS IN HOSPITAL
Alen severed his spine and one of his kidneys had to be removed. He was treated in the Addington Hospital for six months and celebrated his 21st birthday in a hospital ward. “I knew something was wrong while I was in the orthopaedic ward. When they told me I would be paralysed, it did not hit home at first. To be honest, I never allowed it to get to me! I was recuperating in a ward with guys who mostly broke their legs while drunk. We couldn’t help but have fun. I also had many wonderful friends who supported me,” says Alen (57), who today lives in Pinetown with his wife, Charlene. He is the proud father of Roger (35) and grandfather to Nathan (4) and Daniel (ten months).

AMAZING PEOPLE TAKE TIME WHEN IT’S NEEDED
Friends from the Ladysmith Athletic Club, which Alen belonged to since he was a schoolboy, pitched up at his house the first week he was back home from the hospital. First they held a surprise party for him and then, a week later, they arrived to take him to the club’s time trial, a weekly event he loved. “And that was the end of my sitting around! They put me in the car with my wheelchair and we were off to the time trial. Molly and Dough Hamilton were the club’s secretary and chairman at the time and they were instrumental in getting me going.”

Week after week followed the same routine; club members took Alen to the time trial, where he started keeping time. In 1975 he bought his own car, which was adapted to meet his special needs. He religiously kept up his timekeeping duties at the club and hardly ever missed a time trial.

Alen later became the club secretary, a role he filled from 1975-1979. Today he remains an Honorary Life Member (31 years) and honorary vice-president of the Ladysmith Athletic Club.

LOVE AND NEW CHALLENGES
Alen met his wife when he moved from Ladysmith to Pinetown. He proudly says, “She actually nursed me while I was in hospital! We met up again when I moved to Pinetown and we have been together for 30 years now.”

Alen stayed involved in the sport he was so passionate about. While living in Pinetown he read about a new running club, Queensburgh Harriers. Alen immediately decided to get involved in this exciting venture, and eventually played an instrumental role in starting the club. He spent ten years at Harriers and over the years, filled many administrative roles.

In 1990 Alen joined Westville Athletics Club as most of his close friends were members there. He served as cross-country captain, Vice Chairman and road captain and today, 20 years later, he is still a proud member of the club.

TAKING THE NEXT STEP
Alen did not allow his disability to get in the way of his love for sport and he decided to pursue this love of running even further by getting involved in road running on a provincial level. In 1986 he was elected to join the former Natal Marathon Runners Association. He also passed his Road Running and Cross-Country Officials Exam, as well as the Road Running Referees Exam.

Alen’s CV in running administration reads like a book of accolades: Vice Chairman of the Cross-Country Commission; Veteran’s Manager at the South African Half Marathon Champs in East London; Natal Honours Colours for 20 years of service to the sport; Manager of the SA Cross-Country Champs in Pretoria, Middelburg and Bloemfontein… and so the list goes on. He has also received the KZN Premier’s Merit Award, KZN Athletics Manager’s Colours and was a Natal Selector for eight years. Today Alen spends his weekends mainly as a National Referee.

LOOK OUT FOR THE CROCODILE
Alen is a well-known face at every race in KZN. He is affectionately known by friends as the ‘Crocodile’ because of his love for cross-country running, as well as for a good glass of port on a winter’s afternoon, and his tradition of preparing crocodile meat at the club’s yearly prizegiving! “I love cross-country. You get to be out in the open every Saturday afternoon.”

“I am at a race every single weekend and I love it. I am either a line judge or a spotter or I just spend time with my club mates. I am completely self-sufficient and get myself to races. I always find myself a nice parking,” he chuckles. “The organisers and officials know me so well, but I make sure I am never in the way or make a nuisance of myself.”

STAYING POSITIVE
When speaking to any of Alen’s club mates or friends, they all tell of how inspirational and positive he is. Alen is a humble guy and when asked how he manages to stay so positive, he plays it down, saying, “I just love sport. It is my life. I am very committed. When people ask me to be somewhere I will definitely be there. I won’t phone before and say I can’t make it. I don’t like letting people down.”

Alen, who works as a buyer for the Department of Social Development, has never let his disability get him down and has never acted like a disabled person. “My disability doesn’t worry me. I’ve never really mixed with other handicapped people. When I got out of hospital I was mingling with able-bodied people and my old running friends all the time. Those people are still my friends today! By being involved in race administration, it feels like I’m giving something back to them and to running.”

Most of us runners just pitch up at local clubs or races and expect everything to be organised. It is only a select few who get involved in the administration and organisation and actually make things happen. A person like Alen is invaluable to running clubs and races. The experience and passion he has for our sport is incredible. It is people like you, Alen, who make our sport great. From all Modern Athletes we would like to say, “Thank you!”