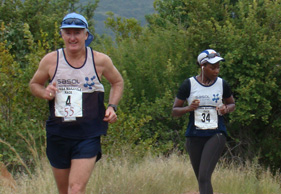 This race was 42.2km of pure heaven. I can’t wait to return to this adventure next year. – BY JOHAN GRASSMAN

We arrived on the Friday at the Marakele National Park, just past Thabazimbi. There were various distances to choose from (5/10/21.1km) and most runners opted for these distances. There were only 63 runners running the marathon and I fancied my chance of finishing last was pretty good!

A profile of the route was posted on the park’s gate, where the race started. When I saw how difficult it was, I thought of rather running the half marathon! Unfortunately the gun went off before I could bail and off we went.

The first 7km were flat through the Bushveld and we saw giraffes, zebras and impalas. As we ran through a small tunnel and an electric gate it felt like we entered the wild side. We climbed for the next 5km (at certain points it felt steeper than Long Tom’s staircase!) As we turned onto a narrow tarred road one could see the beautiful Waterberg, but one question stuck in my mind, ‘How am I going to get up here?’

A never ending series of steep ups and downs followed. At the 13km mark all the runners were instructed to get on the back of a few bakkies  because a pride of lions were in the road! We did not argue and quickly got on! We were dropped off about 500m past the lions and carried on running.

The views were spectacular and there were long stretches where we could not see runners in front or behind us. At the 28km mark the drivers of the bakkies said we should run on the right hand side of the vehicles and jump on should a lion stand up (apparently the lions had finished breakfast and we did not look so good anymore).

The next 2km were downhill to the next water point. From there it was all the way back down a gravel road, through the same tunnel and on to the last flat 7km to the finish. We got a nice medal a t-shirt and free beer! This was a memorable race and I hope the organizers will keep entries limited. Somehow I felt much closer to God on this 42.2km of pure heaven. I can’t wait to return to this adventure next year.