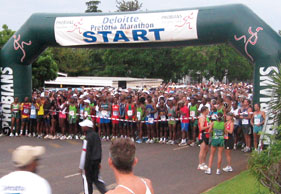 The Deloitte Pretoria Marathon is known for its hills… and more hills. But every year the race attracts thousands of runners ready to take on one of Pretoria’s toughest runs. This year was no different. A record number of over 6 000 runners finished the 10km (2 400), the 21.1km (2 600) and the marathon (1 600). Glenn Weldon, a runner from Jeppe Quondam Athletics Club, took on the half marathon and shared his experience with Modern Athlete.

It was a chilly start to the morning with heavy cloud cover and quite a cool breeze in the air, but there was a buzz of energy amongst the thousands of runners as I made my way to the starting line.

The gun went off and everybody surged forward. I had that familiar feeling of butterflies in my stomach as we headed off into the unknown of a new race day. Almost immediately we hit the first hill and a long, drawn out climb loomed in front of us. Everybody I had spoken to about the Deloitte Half Marathon had warned me about the long climb, and I was now starting to understand what they meant!

My strategy for this race was not to run it all hard, but to try and run all the hills hard and then to relax going down the other side. That would give me good quality hill training, but would allow me to still run the next morning. It seemed to be working but I must admit, I didn’t expect the hills to be that tough! I genuinely felt sorry for the poor buggers running the full marathon.

As we came around a corner we were welcomed by the Pretoria Boys’ High Pipe Band, which gave me goosebumps (please will someone ask these guys to play on the Comrades route?). We started summiting the notorious Klapperkop Hill. At the top, the awesome views of the Waterkloof Golf Course, UNISA and the whole of Pretoria awaited us. It was spectacular and, for a brief moment, it made me forget my tired legs.

We had a nice, long downhill cruise to Pretoria Boys’ High. Running through the school was incredibly beautiful. A short stretch through the beautiful leafy suburbs of Lynnwood took us back to the finish at Phobians Running Club.

This was a very scenic run and although it was hilly, the views were worth it. The race was extremely well-organised. I finished in two hours and will definitely be back again next year!