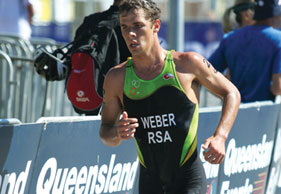 Under-23 All Africa and under-23 SA Triathlon Champion

“He is one of South Africa’s most talented triathletes.” Those were the words of Triathlon SA High Performance Manager Emma Swanwick after having watched Wikus Weber in a few races towards the end of 2009 and after a battery of tests at the High Performance Centre in Pretoria in January.

Known as Fluffy in triathlon circles, Wikus grew up in Boksburg and is now studying Sport Science at the University of Pretoria. He lives and trains at the High Performance Centre with the aim of becoming a full-time professional and Olympic triathlete. “My main sports at school were cross-country and swimming. I was always up for a challenge and decided to combine my sports. My first taste of triathlon was at the age of 13 when I won the Central & Northern Gauteng Triathlon. From that day on I was hooked,” says Wikus.

Wikus says his other big goal for 2010 is to build up his International Triathlon Union (ITU) points. “I want to do a number of World Cup races so I can amass points to build up my ITU ranking and then in 2011 hit the World Championship Series.” In June and July he will also be racing in the French League. “I would have loved to have raced the whole French League, but it is so difficult to get a spot that for me to be able to race in two races is a huge achievement.”

Wikus says his favourite discipline is running, even though he finds it the hardest. “My main focus now is to improve my swimming and running; swimming because I need to stay with the front bunch, and running because I need to cut down at least four minutes on my 10km time. But I am young and there is still a lot of time ahead of me. My most important focus now is to enjoy the sport.”