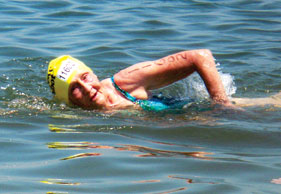 She has seven children, 24 grandchildren and 18 great-grandchildren. She has lived through a war, studied at a technikon at the age of 58 and worked full time until she turned 70. More amazingly, at the age of 86, Lorna Cochran has just completed her 12th consecutive Midmar Mile, becoming the oldest finisher in the history of the race. And there is no holding her back. For this great-grandmother, life – and training – has just started!

When Lorna Cochran lined up at the start of the Midmar Mile two years ago at the age of 84, someone asked her if she would be back the following year. “My dear, at my age we don’t buy green tomatoes because we might not live to see them ripe!” But Lorna has returned to the world’s largest open water swimming event twice. No small feat for someone who is heading for her 90s!

Lorna speaks passionately about her lifelong love of sport and her love for her sporty family. Sitting on a chair in the Methodist Home in Benoni where she lives, she effortlessly lifts her leg almost all the way to her head and explains the exercises she does twice a week with other residents and a fitness trainer. It is hard to believe that Lorna is at an age where most people don’t even think about exercise.

BORN TO BE SPORTY
Whilst Lorna hails from Springs in the East Rand, as a child she attended a convent in Newcastle. “I did not pay much attention in class, but when anybody even just whispered something about sport, I was there!” At school she danced, sang, played music, tennis, hockey and swam. “We did not have cars in those days and walked everywhere. We walked 4km to church and back and never thought anything of it. “

Lorna married her husband, Ewan, and had her first four children within five years of their wedding. The family moved to the former Rhodesia for a while, but returned to South Africa in 1968. Shortly afterwards, Ewan sadly passed away and Lorna had to start working again. “I hadn’t worked for years so I took the first job I could. When I turned 58 there were whispers that I would have to retire at the age of 60. That is when I decided to go back to technikon and redo my typing qualification. I wanted to use that as a bargaining point to keep a job.” Lorna then started working at a new company at the age of 60 before eventually retiring ten years later at the age of 70. In this time she kept her love for exercise going by playing tennis and walking (one of her sons owned a Run/Walk for Life franchise).

THE START OF A MEMORABLE JOURNEY
Lorna never really considered taking up swimming until her son, Neil, completed his first Midmar Mile and persuaded his mother to join him the following year. “It was all Neil’s fault that I started swimming! He came back from the Midmar Mile and said, ‘Mom, I think you can do this.’ My first thought was, ‘You do?’ I was 75 years old.”

That was in 1998. Neil fetched his mother three to four times a week to train at a nearby pool in Boksburg. “I could not even swim one lap (50m) the first time in the pool. I slowly started alternating breast stroke and freestyle and gradually improved. Within five months I could swim 1 200m!”

Lorna admits to being extremely nervous when she arrived at the start of her first Midmar Mile. “I was so frightened and was even thinking of ducking! As I got into the water I realised I could do it and when I finished, it felt so good that I became hooked.”

Every year since, Lorna stayed fit by playing tennis in winter and walking regularly before starting her swimming training in summer. She was so committed that she eventually trained alone in the mornings in a pool close to her home. Before she knew it, she was on her way to her tenth Midmar Mile. “I just kept going. It can get a little bit lonely living where I live, especially when you come from a very big family. Participating in the Midmar Mile makes you feel you are part of something. It has a sense of camaraderie and fun.”

A SPECIAL YEAR
2008 was a very special year for Lorna. Not only did many of her children and grandchildren join her on her tenth voyage, but it was also her son, Neil’s, tenth swim. The family had t-shirts made with the letters ‘TLC’ printed on the front and ‘Team Lorna Cochran’ on the back.

Lorna speaks of her family with great love and admiration. “My whole family has always been there for me. Their support and encouragement have been amazing.” Most of Lorna’s family is very sporty; Neil is a Comrades runner and Ironman finisher. His daughter, Rose, is also a Comrades finisher while many of Lorna’s other children and grandchildren partake in some form of sport. “When Neil finished the Ironman, I ran to him at the finish line. One of the spectators commented that she hopes that his wife can keep up with him. My daughter-in-law turned around and said, ‘Excuse me, I am the wife. That is the 85-year-old mother!’“

She would love to tackle the Midmar Mile again next year, but Lorna admits that it is getting harder every year. She completed her first Midmar Mile in 53:45 and her tenth in 60:10. She struggled with her breath last year and initially thought she was not going to make it. “This year was better. The water was a bit choppy and it took quite a bit of effort, but I didn’t push. It would be ridiculous to do so as I wouldn’t get to the end! I just see how I feel when I’m in the water.” Lorna has been awarded the Oldest Lady Finisher Trophy for the last three years, and she proudly displays it in her house.

A WAY OF LIFE
Exercise is a way of life for Lorna. She still walks three times a week, and joins in when residents from the Methodist Home go for walks at the nearby bird sanctuary. “They walk about 2.5km, but sometimes it is not much of a workout for me, so I try to add another 500m or so,” she chuckles. “After exercise I always feel so good!”

Many residents in the Methodist Home have taken up exercise after seeing Lorna’s passion for life and training. “Since I have been here a few people have started walking, even if it is just in the complex. I believe people have to motivate themselves. Even if you just walk around the block you have to do something. Exercise keeps me young; walking keeps my limbs moving and when I swim, there is not a lot of strain on the body. I can’t imagine not exercising.”

Lorna has never felt like giving up. “I believe you have to push through the challenge and be mentally strong. If the thought of giving up crosses my mind, I always think of these words: Remember that the task ahead of you is never as great as the power and potential within you.”