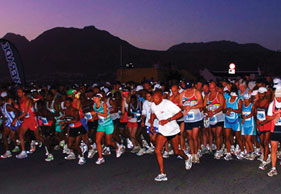 We live in a country with a road running calendar like no other, but running every race can become costly. Modern Athlete spoke to race organisers to find out what goes into organising a race and what costs are involved.

Exactly 32 years ago, it cost R2 to enter the RAC Tough One, a hilly 32km race in the northern suburbs of Johannesburg. Up to a couple of years ago the entry fee for a standard half marathon was R30, a 32km would cost R40 and a marathon about R50. Over the years, like most other things, entry fees have escalated.

These days it is not uncommon to pay R50 for a half marathon, R60 for a 32km and R70 for a full marathon. Some larger, more popular ultras (50km) may even cost about R150 and the accompanying half marathon could cost entrants up to R100. Some runners complain that races have become too pricey, while others don’t mind paying, but want value for their money.

Many times runners complain, but they have no idea what goes into organising a race and how much it costs, says Vreni Welch, one of the country’s well-known faces in road running. Vreni has been the Rand Athletic Club’s secretary for the past 28 years and has been involved in organising the RAC Tough One as well as some of Gauteng’s biggest races.

Entry fees for road running races are still minimal compared to events such as Ironman and many cycling races. An entry into the Ironman 70.3 costs about R1 200 while, depending on sponsorships, you could pay anything between R2 200 and R3 500 to compete in the full Ironman. And when it comes to our country’s cycling races it is not uncommon to pay more than R250 for a 105km cycling event. “These amounts are realistic. Road running races are still cheap compared to cycling, adventure races, duathlons and triathlons,” says Vreni.

CLUBS VERSUS EVENT COMPANIES
In most instances running clubs organise their own races and do everything from start to finish. This includes finding sponsorships, printing and distributing entry forms, ordering Coke, water, t-shirts and medals, setting up water tables and taking care of every little detail. “It can take up to five months to organise a race and about 400 people are involved. Most times we just break even,” says Vreni.

Event organisation companies sometimes get involved when clubs are too small or inexperienced to organise their own races or when the race is too big, says Andrew Bell, co-owner of Top Events Event Management Company in Cape Town. Top Events is known for its excellent organisation of several races, including the BDO Peninsula Marathon & Half in February in Cape Town and the Safari Half Marathon in Wellington in May. The Safari attracts close to 10 000 athletes while another 10 000 people usually participate in the day’s festivities. Companies like Top Events usually charge a management fee and/or claim between 15 and 25 percent of the sponsorship.

These event companies usually organise a race in its entirety, but sometimes they only help with certain aspects such as the printing and distribution of entry forms. Sponsorship has become extremely hard to find. “We had some long-standing contracts last year. If it wasn’t for that we would have gone under,” says Andrew.

He points out the following:
•    Top Event’s budget for the recent Peninsula Marathon in Cape Town, which is seen as a medium-sized race, was just under R300 000. The upcoming Safari Half Marathon is classified as a big race and their budget is about R900 000. The medals alone cost R122 000. A small race could cost between R25 000 and R40 000 to organise.
•    Medals and the traffic department are usually the two biggest expenses. A decent medal costs between
R6 and R8 while the traffic bill for a race like the Peninsula Marathon could add up to R26 000. A race announcer costs anything between R2 000 and R3 000 and at bigger events, two announcers are usually needed.
•    A race such as the Peninsula Marathon takes about six months to organise.

RACE DAY HEADACHES
Most clubs and organisers try to keep entry fees as low as possible, but as time goes by, expenses go up. Things can go wrong because organisers start taking short cuts. A shortage of water or no medals are usually the biggest complaints amongst runners, says Andrew.

“In summer when it is extremely hot or when the route is very tough, we always try to order more water. Also, in times such as Comrades 2000 and Comrades 2010, we know there will be an increase in numbers and we try to increase our resources. Organisers just hope and pray it doesn’t rain on the day and that everything goes well,” says Andrew.

When organising a race it is very hard to predict how many runners will actually show up on the day, says Vreni. “We usually work on the previous year’s numbers plus a 10% increase. We try to encourage athletes to pre-enter and try to cover our costs with pre-entries; anything over that will help with incidental costs. But often we work on a loss. There are no set entry fees for the different distances. Clubs look at what the others are charging and just hope they will get their numbers. We can only hope and pray for good weather on the day and that everyone involved arrives on time and does what they are supposed to.”

The following items all contribute to race costs:
•    The printing of entry forms costs about R5 per person. “It is heartbreaking to see entry forms lying on the ground after a race,” says Vreni.
•    Most clubs make use of volunteers or companies to set up water tables free of charge, but sometimes this incurs further costs.
•    Metro police officers need to be stationed at every traffic light. The traffic bill is usually the most costly, as traffic officials can charge up to R200 per hour.
•    The delivery of ice early on a Sunday morning outside of working hours can cost a club up to R2 500 – often more than the ice bill.
•    Three to four marshals are necessary for every 1km in the city.
•    It costs a minimum of R150 to hire one portable toilet. Nowadays more races have toilets on the route, which adds to costs.
•    Cones for races can be very expensive and many are needed. For example, 890 were used at the 2009 RAC Tough One.

Organisers sometimes get frustrated with runners who complain about everything. “One year we handed out very nice toiletry bags, but many athletes complained because it was empty!” says Vreni.

The bottom line is that the cost of organising a race is no small money, but at the same time a small budget is no excuse for bad organisation.

YOU CAN HELP KEEP RACE COSTS DOWN