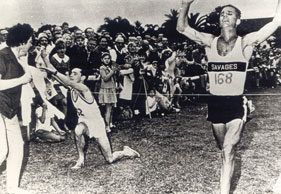 It was 1959 when a bunch of restless soccer players from Savages Soccer Club in Durban got together and decided to exchange their soccer boots for running shoes to stay fit in the off-season. One year later and one Comrades Marathon wiser they were hooked on running and Savages Athletic Club was born. Over the years the club has not only produced top runners, but also left its mark on running in KwaZulu-Natal, and this year Savages celebrates its 50th Golden Jubilee.

It was 1959 when a bunch of restless soccer players from Savages Soccer Club in Durban got together and decided to exchange their soccer boots for running shoes to stay fit in the off-season. One year later and one Comrades Marathon wiser they were hooked on running and Savages Athletic Club was born. Over the years the club has not only produced top runners, but also left its mark on running in KwaZulu-Natal, and this year Savages celebrates its 50th Golden Jubilee.

There are not many of our country’s ‘older’ running clubs around in which the founding members are still actively involved after 50 years, running weekly time trials and having drinks in the clubhouse pub. Kenny Craig, who is one of only two runners with 40 consecutive Comrades Marathons to their name, is one such member. For half a century his loyalty has stayed with Savages, and he has a real passion for the club.

“It was 1959. We were all playing soccer when, at the close of the season, I said to the blokes, ‘I have lived in Durban all my life and I always had this ambition to run Comrades.’ We were soon on our way to our first Comrades. It turned out to be the longest in the history of the race, about 91km! I finished in 8:46. And so we decided to start our own club. We went to Durban Athletic Club for advice on a constitution. They urged us to join their club because they felt Durban was not big enough for too many running clubs. But we were adamant to form our own club. And look where we are today,” says Kenny.

THE GOOD OLD DAYS
Kenny’s three co-founders were Joe Knowles, J Finlay and Arthur Simpson. In 1960, the year the club was born, the member count was a modest 11. The numbers steadily grew and within 25 years of starting the club, the membership reached 1 000. At one stage Savages was the biggest club in South Africa, says Kevin Bradfield, a current committee member.

Over the years the club has produced its fair share of top runners. Within two years of its establishment the club achieved its first Comrades success, winning the Arthur Newton Shield for the second placed team, and in 1965 won the Gunga Din Trophy for the first placed team. The winning quartet was made up of Manie Kuhn, Fritz Madel, Clive Crawley and Kenny. Savages went on to win the Gunga Din a further eight times, and the Arthur Newton Shield a further three times. The club’s first individual gold medals arrived in 1963, earned by Fritz, Manie, Clive and Ted Craig. (Clive and Kenny are two of only four runners to complete the Comrades 40 or more times, with Clive second on the list with 42 medals and Kenny joint third on 40.)

HISTORIC MOMENTS
One of the most memorable Savages moments came in 1967 when Manie Kuhn beat Tommy Malone by one second, which remains the closest Comrades finish in the history of the race. No one will ever forget the drama at the finishing line when 1966 winner, Tommy, stumbled and fell inches from the tape. He struggled to rise and as he got to his knees, Manie broke the tape! Manie and Savages Athletic Club will forever be remembered for this historic moment.

Manie’s victory was followed by another by Dave Bagshaw, who claimed a hat trick of Comrades wins in 1969, 1970 and 1971. By then Savages runners proudly had their names on numerous Comrades trophies and shields. In 1969 Dave, Roland Davey and Dave Box also became the London to Brighton winning team.

In 1969 a women’s section was started, and Meryl Hancock, South African cross-country champion in 1968 and 1969 and a member of the women’s European touring cross-country team, brought honour to the club in her short period as a member.

FAMOUS SAVAGES FACES
•    Tilda Tearle won the Comrades Marathon in 1993.
•    Blanche Moila made history when she became the first black female athlete to win Springbok Colours.
•    Grace de Oliveira and her husband Eloi were both Savages members for many years. Grace is a seven-time top ten Comrades finisher and often wins team prizes with her husband. Both now belong to Boxer Superstores Athletic Club but are still often seen at the Savages time trials.
•    The club has produced its fair share of golden oldies with bags full of Comrades medals: besides Clive (42 medals) and Kenny (40), Dave Williams has run 36 and is aiming for his 37th this year. Dave is also the runner who dramatically helped a Fit 2000 member over the line seconds before the cut-off at Comrades 2007, finishing in 11:59:36.
•    Another well-known member is Boysie van Staden, the first runner to obtain all the Comrades medals from bronze to gold.

SOCIAL SCENE
When you go to Savages club, it’s like visiting family, but don’t think the members are not competitive! Club members often finish on the podium at different KZN races.

After time trials on Tuesday nights, members gather around the pub for a few cold ones and a braai. Members bring their own meat and whatever else they want to eat. One constant on the menu is a very special bread, baked by one of the club members who chooses to keep the recipe secret! On Thursday nights runners gather at the clubhouse for a 10-13km run before they share running stories at the pub.

One of the social highlights takes place in December when members participate in the annual Pub to Pub run. They start at the clubhouse and run a circular route through Morningside, stopping at various pubs to enjoy the finest lagers. Also, an annual Christmas dinner is held. Then in January it’s back to serious training and the club provides an extensive Comrades training programme to its members. They also focus on cross-country and track running where possible, Kevin adds.

TEAM SPIRIT
When it comes to team spirit it seems Savages leads the way. Their neighbouring club, Westville Athletics Club, hosts a popular annual 15km Christmas run, sponsored by Illovo Sugar. For this ‘race’ the Savages members throw all their hopes of PBs out the window and join in on a day of fun and festivities. Each year a specific theme is chosen, normally in the form of some sort of vehicle that needs to be pushed or pulled with Santa Claus as the driver. Savages has won the trophy for the best club bus on ten occasions.

TIME TRIALS
The Savages Five-Miler, the first to be run in Durban, was started early in 1965 by Gerry Treloar, Dick Morton and Manie Kuhn. These stalwarts were soon joined by other enthusiasts and for the next 13 or 14 years, a group of up to 50 runners met every Tuesday at King’s Park. Over the years the Five-Miler changed to a 4km and 8km time trial route run every Tuesday at 17:30 from the Savages clubhouse.

Over and above the traditional time trials, Savages is also a member of the Time Trial League. This is a competition amongst eight clubs, and members are encouraged to participate as scoring works on a system where it is participation, not only placing, that counts.

50th GOLDEN JUBILEE CELEBRATIONS
Savages has always been big on celebrations; some club members still remember the club’s tenth anniversary many years ago; a five-course dinner was served at a dinner/dance at the old Harcourt Hotel at Brighton Beach. The charge per person was a mere R2.50!

The year 2010 is no different and the members of Savages plan to celebrate in style:
•    6 March 2010 @ 18:00
This is the actual founding day of the club. A cocktail evening at the club will be held where old friends can meet to share stories of the past and tell the young ones how it was done. There will be a cash bar and snacks will be provided.
•    16 May 2010
Savages host their annual 10/21.1km race under the brand of The Savages Golden Jubilee Challenge. The race will start at the Cyril Geoghegan Cycle Stadium and the route makes its way through the scenic beachfront and surrounding suburbs.
•    15 June @ 19:00
A black tie evening will be held at the Royal Durban Golf Club. Tickets go on sale from 6 March. Some interesting club historians will share their stories on how Savages has excelled over the years.