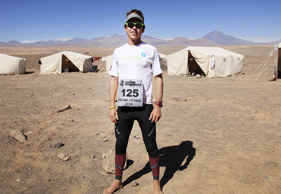 Last night must go down as one of the coldest nights of my life…. the consequences of trying to have a light pack and not using a sleeping mat!

It was a good feeling to get started this morning after the previous week’s events and the lead guys set off at quite a quick pace. I was feeling good on the first climb and made a break and ended up running the rest of the stage on my own. My final time was 3 hours and 3min about twenty odd minutes ahead of the second placed runner. From my previous race experiences it helps to have a time cushion after the first day so I am quite chuffed with the way things went. Not to say it was easy out there…

I still can not get the fact that we are running along in a desert in 40 degree temperatures and looking up at snow caped mountains…. there were a few times today when I could have done with some of that snow! The first two sections of the stage flew past really quickly apart from a quick pit stop…. Rob, I could have done with a pooh bag! The third section had a never ending hill which kept on going up… There is not a lot that lives in the Atacama apart from a few Llamas and things got very hot and lonely out there. I finally made it to the check point and from there it was a quick 3.6km to the finish. It’s a big day relief to get the first day under my belt with no issues.

The terrain here reminds me of running in the Gobi Desert except there is not much life and the air has slightly less oxygen! When we are not running in dry river beds, then it is across fields of rock and sand. But all in all it has been a good day at the office in an awesome place..

Off to the tent now to put my feet up..