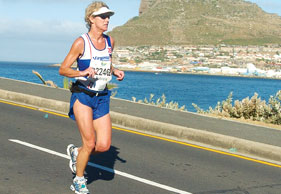 Between stressful jobs and trying to spend quality time with the family, exercise is often the first thing that falls to the bottom of our list. In a series of features on how to balance a busy career with running, Modern Athlete speaks to various high-powered professionals to find out how they manage to fit sport into their hectic schedules. This month we chat to Trish Taylor (39), Chief Executive Officer of East Coast Radio (ECR).

What is your background and how did you get involved in broadcasting?
I studied sales and marketing before starting my career at the SABC. I spent five years there and two years at the Graduate School of Business. When the government privatised six radio stations, the shareholders of ECR approached me to head up their commercial division. Three years later I became sales marketing director and in 2003, CEO. I have been in the industry for close to 16 years.

What is the most exciting thing about your job?
I’m very passionate about radio particularly, because it’s a creative and immediate medium. Things are happening in the community every second and we are in a position to immediately report on it.

Who are the most interesting people you have met?
I have met musicians such as Elton John, Stevie Wonder and Michael Bubl? who have all been interviewed by ECR. One of the most memorable moments was when I had tea with former president, Thabo Mbeki. ECR is involved in many community programmes. The former president learnt about it and requested a meeting with me. So I flew to Cape Town and we sat in his office having tea and discussing projects. It was fascinating! I have also met local adventurer, Kingsley Holgate, and always find it interesting hearing about his next adventure.

How long have you been running?
About 18 years.

What motivated you to start running?
In Matric the entire school had to take part in a compulsory cross-country event. I ended up winning! After school I started running the odd 10km race and progressed to half marathons. I religiously watched Comrades on TV and it was always my goal to run at least one Comrades.

How many hours a week do you spend on the road?
I run about 60km a week and will probably peak at about 100km a week, closer to Comrades. I have changed my running routine and try to focus on quality sessions rather than quantity.

How do you fit running into your busy life?
I run in the mornings at about 5:00. That is my time and a great start to the day. It really sets the tone for the rest of my day. When I don’t run I feel like something is missing.

Who do you train with?
I run with Regent Harriers and also train with a friend, Michelle Hall-Jones.

Have you run any big races?
I have completed Comrades seven times and Two Oceans three times. My best time at Comrades is 8:40 and I have three Bill Rowan medals. Two Oceans last year was probably my best race ever. I finished in 4:38 and was the 27th lady.

What do you see as the biggest obstacle to your running?
I travel a lot domestically and that sometimes interrupts my training. I am not a big fan of running on a treadmill in the gym, but if you don’t have any other choice, it has to do!

Has running influenced your career and work ethic?
Definitely! When training for something such as Comrades, discipline is key, especially when your social life comes to a bit of a stand still. Endurance events require mental discipline and that has helped me to exercise mental endurance in other spheres of life.

What is the best advice you have been given with regards to running?
Focus on quality training sessions as opposed to just spending hours plodding at a slow pace. I have become a much faster runner by not being pedantic about the amount of kilometres I run every week.

And the worst advice?
Run through an injury!

Proudest moment in running and in business?
In running it has to be my first Comrades in 2002. Just to have such a goal and to achieve it was wonderful and special to me. Another highlight was my finishing time at Two Oceans last year. In business it is being appointed as CEO at the age of 32 and increasing our revenue by 30%.

Most embarrassing moment in running?
When I ran my first marathon I went for a toilet break behind a bush and fell into a very deep hole… I had to be helped out. I came out of the bushes with blackjacks everywhere. I was shattered!

The thing I love most about running is…
The way I feel when I am fit and healthy. Also, there is nothing like running in the morning when half the world is asleep. I absolutely love starting the day with a good run, especially living on the coast where we get to see such beautiful sunrises. It motivates me for the rest of the day.

After a run the first thing I like to do is…
Take a shower or swim in the sea. And after a long race on weekends, it is nice to just go home and relax.

My greatest ambition is to complete…
A marathon on each continent.

I don’t enjoy being beaten by …
I compete against myself and try to better my own times. I get disappointed when I don’t reach my potential in a certain race.

Who are your running role models?
Bruce Fordyce. He has achieved some phenomenal heights and has really put road running on the map.

Where is your favourite place to run?
Anywhere coastal. I love running in KZN, but I also like running between Camps Bay and Clifton in Cape Town.

What do you think about when you run?
Running provides me with a great mental and emotional space as well as a huge amount of escapism. Sometimes I do think about work while running and I am able to refine a particular project.

I could not go running without my…
Garmin.

What is your favourite meal after a big race?
A big cup of tea and a Chelsea bun.

What would you say to someone who says they don’t have the time to start running?
They are doing their bodies a disservice by not making time to exercise. Running is so good for you mentally and emotionally. It is a necessity to exercise because it maintains health, which is linked to other areas of your life such as self-image and self-esteem.

Life motto?
To be distinct and to explore and exercise my God-given talents.