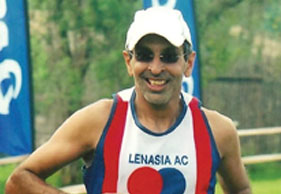 The Ottosdal Nite Marathon is a race with a difference; it is the only marathon run at night in South Africa and it has a farm atmosphere of note. Over the last couple of years the race has grown in numbers due to excellent organisation as well as the attraction it holds for runners who are keen to try something different. Jaffer Khan, a runner from Lenasia Athletic Club, shares his experience with Modern Athlete.

Our first thought when we heard about the Ottosdal Marathon was, ‘Where is Ottosdal?’ For those who don’t know, it is about 250km from Johannesburg. As we drove from Lenasia, south of Johannesburg, to the little town of Ottosdal we could feel the temperature rise. By the time we reached our destination it was over 30˚C – and it was already 5pm! Considering that we were about to tackle a marathon, we realised it was going to be a mean feat.

The race started at 5:30pm on the most beautiful, hot summer’s evening in this little known ‘boere dorpie’. At the start of the race the excitement was palpable, as we all knew this would be a unique running experience. Most of us are so used to starting marathons at 6am in the morning and finishing in the heat of the day. This is the only marathon in South Africa that is run at night and the cut-off is 11:30pm, which is probably way past many people’s bedtime.

The farmlands provided good scenery away from the usual concrete jungle that many of us are so used to. I even joked with my running partners that the fresh air was making me light-headed because my lungs were not accustomed to it.

As darkness set in we had to rely on lanterns to guide us on the journey ahead. The lanterns were spaced a few metres apart all the way to the finish. As there were no streetlights, it was an experience to behold. While running, it felt like I was fighting it out with the elements. It was just me and my Lord, and I was praying to Him to help me through the difficult patches.

The darkness was so intense that we did not know whether we were running uphill or downhill. This made my mind play tricks on my body and I had to talk to myself to focus all the way. By 10pm I was tired and wondering what I was doing there. In the pitch dark of the night sky I saw millions upon millions of stars in a narrow band just above my head, shining as if to salute me. I would never experience that in Johannesburg. For the rest of the race I never doubted that I wanted to be anywhere else but right there in Ottosdal, running the night marathon. And as we reached the finish line I knew that, with God’s will, I will definitely return for next year’s Ottosdal Nite Marathon.

I have been running for more than 21 years and have completed over 50 marathons and ultras. In the weeks leading up to this race my friends and I had been training consistently. Every morning we dragged ourselves out of bed and onto the road at 5:30am. Why did we do it? Probably because we can, because it is there, because we like to push the limits and because we enjoy ourselves and have great fun in the process. At the end of the day when it is all over, we have the satisfaction of knowing: mission accomplished.