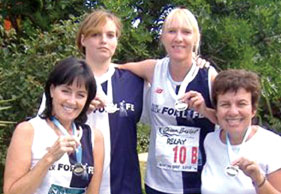 A running race is not just about finishing times, it is most importantly about the people and the camaraderie that make running great. Natalie Szot-Myburgh of Run/Walk for Life in Fish Hoek describes her experience of runners putting others ahead of themselves at the Bay to Bay Relay.

I had planned to run this race for my dad, who passed away on the 10th of January 2008. In 2008, I had intended to run this race, but had to pull out due to his unexpected passing. As the race this year fell on his day, I wanted to run for him.

Four of us decided to run as a 2×2 relay team. Although the first two runners were slower, I thought it would be nice to run with my friend, Corinne, and enjoy the run together. We decided to register on Saturday to avoid congestion on Sunday. When Ingrid, our team mate, returned after registering us, she expressed her concern that if we waited for both of the first runners to arrive in Hout Bay, we might not make the cut-off. At that stage I wasn’t perturbed as I knew Corinne and I could make up some time and finish the race.

When she handed me our relay numbers, I was taken aback. Our team numbers were nine and ten. I knew that my number had to be ten to represent the date of my Dad’s passing. The number nine was also significant, as the ninth had been the last day I saw my father alive. I explained to Ingrid why I was actually running this race. With sudden conviction, she stated that I had to run to my fullest and go get that medal. As she was the faster runner of the starters, we decided that she would run the first leg and pass the baton to me. She said that she would run as fast as she could for me and that if the other team did not get a medal, she would hand her medal to Corinne.

As the sun rose on a beautiful day, Corinne and I stood waiting for the A girls to arrive. We knew we had a while to wait and stood watching the excited exchanges as friends met their mates and the Bs ran off. Thinking I still had another five or so minutes to wait, I was shocked when I suddenly saw Ingrid running towards me shouting, “Go girl! I ran as fast as I could; it’s your day. Go get your medal!”

Off I ran, but then we turned and headed up some unexpected steep hills! As we walked a section, I suddenly became overcome with emotion, realising that Ingrid must have pushed herself to her limit to get to the changeover in the time she did. Suddenly my chest started tightening as my breathing, from emotion, became inconsistent. I forced myself to resume normal breathing and soon we were heading up Suikerbossie. I concentrated on my pace and as we got nearer the top, the weather started to get cooler.

As I reached the top there was an awesome mist and I could feel the soft cool droplets. I aimed to catch the runner ahead of me, pushing myself until I slowly caught the person and then targeting my next marker. At one point I marked an old man from Wellington with the number 70 on his back and wearing a floppy hat. I managed to catch him and as we ran and chatted, thoughts of my father filled my head.

As I entered Camps Bay, my legs began to fail. Along the beachfront I wouldn’t allow myself to walk as there were too many people watching. My legs were now complaining and I set my eye on the hill ahead. When I arrived at the hill, staring at me was the 29km indicator. I could not believe that my last kay would be uphill! I started to walk but thought to myself, ‘Ingrid pushed, now you push girl’. With the finish banner ahead, I ran onto the field and heard Harold Berman call my name. I must have had a big smile on my face. I had done it! We got the medal and I thought to myself, ‘Dad, I did it for you’.

Our little team of four was really proud. Each member had run their best, and the A girls got their PBs. My thanks go to Ingrid, my team mate, and Lillian and Corinne, who were team nine – you girls were fantastic.