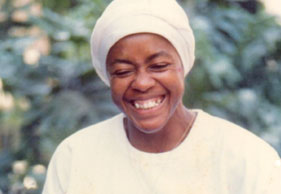 Blanche Moila made history in 1984 when she became the first black female athlete to be awarded Springbok Colours. Over the years she has become a sporting icon who has won more than 50 KZN road running, cross-country and track races. She has held national titles and records over various distances and has received many awards for her achievements as an athlete. These days Blanche devotes her time to the development and training of young female athletes, and her petite figure and distinct turban are still seen at many races.

It was 1981 when a shy student nurse, who was more interested in academics than sport, laced up a pair of running shoes for the first time and participated in a hospital sports day. A doctor with an eye for good runners noticed the slight figure with the economical pace and invited the young Blanche Moila to run with him. Dr Shorty Moolla was preparing for Comrades and needed a training partner.

“Those first runs were painful! After my second day on the road I was so stiff and thought, ‘Is this what running is about?’ My body was so sore I couldn’t tie my shoes or wash my back. Dr Shorty encouraged me and said it will get better. Thank goodness it did!” says Blanche, who was born in Limpopo but stayed in a boarding school in Cape Town during her high school years. These days she works as a nurse, unit manager and night staff supervisor in the Psychiatric Unit at King George V Hospital in Sydenham, Durban.

THE START OF A LIFELONG LOVE AFFAIR
Within her first year of running Blanche ran her first half marathon race in Pietermaritzburg. She surprised spectators – and herself – when she finished in third position amongst the ladies. “After the race, people said I cheated. It was because I came from nowhere and no one had ever heard of me.” These rumours were soon dispelled when Blanche stormed ahead and placed third in her second race, the Femina 10km. That day the big names in KwaZulu-Natal were racing: Colleen de Reuck and Sue van Onselen. “I finished in about 39 minutes and that was the first time people started realising I might have some talent.”

She joined Savages Athletic Club in KZN and is still a member today. Over the years she has been approached many times by commercial clubs, but her loyalty will always be with Savages, asserts Blanche.

Her third race was a 10km in Cape Town and this time Blanche had to compete against even bigger names in athletics, such as Zola Budd and Dianne Massyn. “Zola was first, Dianne second and I placed third! I beat Colleen for the first time. I ran about 35 minutes and took a huge chunk off my PB. The newspapers had my name in their headlines and I started getting noticed.”

ACHIEVEMENTS
Blanche’s list of achievements at various distances is endless; South African 10km, 15km and 21.1km champ, third at the SA Marathon Champs, SA Cross-Country champion and KZN provincial champion in most of these distances. She was also a consistent top three finisher over 15km and the marathon distance nationally until the mid-90s. She represented South Africa abroad at the International Women’s Road Relay events in Japan and South Korea, and in 1993 she represented South Africa at the World Marathon Champs in Spain.

Blanche’s favourite discipline by far is cross-country, but that did not keep her from tackling ultra distances. She has completed seven Comrades and even won a silver medal in 2005, but says she never raced it. “To me Comrades is very social. It is such an amazing race and more about the vibe. You have to run it to understand the attraction; only then will you know why anyone wants to run 89km!” explains Blanche, who will be running her eighth Comrades this year. For the past few years she has been running the race to support the Starfish Foundation, a charity that looks after children who have been orphaned or made vulnerable by AIDS.

AWARDS AND HIGHLIGHTS
One of the highlights of her career was when she was awarded the Shoprite Checkers Woman of the Year Award for Sport in 2002. “To me that was such a huge honour and very humbling,” says 53-year-old Blanche. She has received many other awards: the State President’s Award for Lifetime Achievement, the Sonja Laxton Sportmanship Award, and she was the Face of Comrades in 2004.

In her beginning years of running she adorned her head with a turban, and today this is still Blanche Moila’s trademark. “A turban is a sign of respect. I adopted it years ago and found it very comfortable. It became my persona.”

GREATEST COMPETITORS
Blanche’s success came during a competitive era amongst female athletes in road running. Zola Budd, Colleen de Reuck, Helen Lucre, Tanya Peckam and later Sonja Laxton and Grace de Oliveira have been her greatest competitors over the years, says Blanche. She has built lasting friendships with many of them and today she still stays in close contact with Colleen, who lives in the USA. “I cherish these friendships. We came from an era where it was unheard of to form such close friendships over the colour barrier.”

TRAINING
At the height of her career Blanche averaged about 120km per week, concentrating on many quality sessions. A typical week looked like this:

Nowadays she runs every morning in Sydenham where she lives. She still tries to include speed and hill work in her training programme, but at a much more relaxed pace. “I run about 90 to 100km per week, and always alone. I am a nurse and need to plan my runs around my shifts. It’s a mind thing to make it work. Some mornings I start running at 4:30. One has to make time for running.” She still participates in cross-country and tries to run a few road races per year.

“A while ago we visited a place in northern Natal where there was a lot of running talent amongst the young girls. We selected some for training camps and obviously, they first had to ask their parents. Some parents said they first had to consult their ancestors. This type of thing happens a lot in rural communities. There is so much talent out there, but unfortunately some of our traditions and norms distract from that talent,” says Blanche. She regularly appeals, especially to male black athletes, to spread the word amongst youngsters that it is acceptable and healthy to run.

MYSTERIOUS MYTHS
There are still many myths when it comes to black female athletes, especially amongst the rural black community, and it is these perceptions that she is trying to change, says Blanche. Some of these myths include:
•    If you run, you will not be able to conceive.
•    Running is not feminine and you will become very masculine.
•    The ligaments in your breasts will snap and make them droop.
•    Running slows the development of female reproductive organs.

GIVING BACK
These days Blanche is very much involved in motivational speaking at various schools and she also heads an anti-drug campaign. “I try to remind young people there is no quick fix. If you want a high, you must run. You must go out there and get a natural high!” She has received tremendous support from the community: Beshet High School in Sydenham, where Blanche regularly speaks, named one of their school houses after Blanche, while another school has named a floating trophy after her. “This motivates me because I would love to see youngsters achieve so much more than me.”

Blanche also enjoys being involved in the administrative side of running, currently serving on the Interim Board of Athletics South Africa and often acting as team manager and accompanying athletic teams abroad. From time to time she is also a commentator on Radio 2000. “I want to give back on different levels because I got so much from sport.”

One thought on “Queen of the Road”