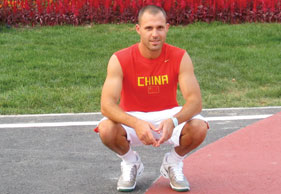 He has had tea at his house with sporting legend Martina Navratilova, the well-known Williams tennis sisters count amongst his friends, and local sporting stars such as Ryk Neethling, Corn? Krige and countless others have found relief from their injuries under his experienced guidance. And on top of that he speaks a bit of German, Russian and fairly decent Chinese. Richard Sutton has the international sporting world on fire with his fusion of treatment therapies and training methods. Though he has lived and worked abroad for the last ten years, Richard is a homegrown boy who wants to return to his own country and share his expertise with local athletes.

It is hard to pinpoint an exact job title for Johannesburg-born Richard Sutton. It seems he does it all. His treatments and training methods can best be explained as a fusion of kinesiology, physical therapy, visceral osteopathy and sports science. Quite a mouthful! But one thing is for sure: Richard has had amazing results and success internationally and locally over the last ten years.

His tennis clientele includes five former number one players, 14 top ten players, 22 top 20 players along with a host of other top international players. Most recently, with his guidance and support, China’s top player, Li Na, achieved amazing results when she reached the semi-finals of the Australian Open and broke into the top ten – something that China has been trying to achieve for decades.

Li was one of two Chinese players in the semi-finals and both had an extensive history of injuries. With Richard’s help these injuries were resolved.

THE START OF GREAT THINGS
When Richard was growing up, his idols in the sporting industry all had kinesiology backgrounds. After completing his national service in the navy, a career in sports therapy was a natural path for Richard to follow. He studied sports science in the UK before continuing his studies in clinical kinesiology in the USA. “There was always something that drew me back to South Africa and after my studies, I decided to come home and set up a practice here.”

He leaned towards specialising in golf mechanics together with the treatment of movement-related pain disorders. “I was very lucky and quickly started gaining recognition. Truthfully, golf was not my primary passion, but I found it incredibly stimulating and an excellent base to start from,” he says.

Richard has worked with a broad spectrum of sportspeople, ranging from elite rugby players to swimmers and runners. He found a love and passion for tennis when, through his extensive golfing network, he was introduced to and started treating two former Davis Cup players. One thing led to another and soon Richard was on tour with South Africa’s current Davis Cup captain, John-Laffnie De Jager.

“I specialise in repetitive trauma injuries, which means anything that is of a neuro-mechanical nature that comes about through over-exposure to the same movement.”

ROAD TO INTERNATIONAL STARDOM
While travelling and working abroad, Richard’s fascination with pelvic asymmetry and associated pain led to another major career breakthrough. At the 2003 Wimbledon Championships, tennis legend Martina Navratilova was introduced to Richard. She had a lower extremity injury referred to as ’heel pain‘ syndrome. Martina had struggled with this injury for some time and had seen countless professionals with little success. “After three treatments she had full resolution,” says Richard. Martina managed to play pain-free until her final doubles match at the US Open in 2006, which she won.

BIG NAMES
Richard has worked with some of the biggest names in the local and international sporting industry. These are just a few:
•    In 2005 he helped SA tennis player, Wesley Moodie, with his physical development. During this time Wesley captured a Wimbledon doubles trophy and stormed his way into the top 55 singles rankings/top 20 doubles.

•    In 2006 Richard signed with Russian tennis star, Nadia Petrova, and was appointed as the Russian National Therapist for the Hopman Cup. In this time Nadia peaked at a personal best of three in the world.

•    In 2007 Tommy Haas, German-American tennis player, achieved one of his best years as he managed to stay injury-free after working with Richard. Tommy peaked at a top ranking of sixth in the world.

•    Richard was the Executive Director of Physical Development for the Chinese National Olympic Tennis team at the 2008 Beijing Olympic Games.

LIFE IN CHINA
An important part of Richard’s career was spent in China when the Chinese National Tennis Federation approached him to work at the National Olympic Training Center in Beijing. China had never performed well at any of the previous Olympics and had never won a singles match. Also, all five members of the Olympic team were injured. In 2008, eight months after Richard joined the team, China achieved their greatest results in singles tennis; this included going to the semi-finals and a bronze medal at the Olympics.

“While in China I consulted in many other kinds of sports, ranging from gymnastics to judo.” China’s success in Beijing was unmatched, with a medal count almost twice that of any previous Olympics (100 medals, including 51 golds).

PRACTICAL EXPLANATION
So what exactly makes Richard’s treatments and exercise programmes so different from others? “Perhaps it is the way I integrate different therapies/philosophies and the fusion of east and west that has given me the edge the last ten years. I try to see the broader picture at the end, before I even start.”

Richard evaluates hopeful athletes and only then makes a decision on a recovery path, and which manual therapies and/or exercise interventions to use. “I normally only take on injured individuals and depending on the level they are at, I make a decision whether I will take over their training programme. I will treat them in any way that is required within my scope of practice and concurrently initiate a progressive integrated and functional training programme. Initially my goal within the Chinese team was to eradicate injuries, then to make sure they don’t get injured again and lastly to make sure they excel at their given sport through the re-education of movements as well as the facilitation of performance through improved power, endurance, co-ordination, speed and other relevant physical abilities.”

HERE TODAY, GONE TOMORROW
The international sporting industry is competitive and to be successful one has to achieve results. “It’s one thing to work with an individual and they remain the same, and another thing to work with them and they improve. That is what determines great or average people within this industry. I work seven days a week, months on end. Success is not a nine-to-five job. You are hired for results. If you do not deliver, you will get fired. High-level international sport is brutal; there is a lot of money at stake and the pressure is high, but it suits my personality.”

RICHARD ON RUNNING
Most runners suffer from ankle, hip and lower back problems, and often a combination. “When exposing your body to high volumes of stress, it stands to reason that your body will break down, normally at the weakest point, and when the physical and psychological stresses are the greatest,” says Richard.

Running programmes are generally not well balanced; a lot of time is spent on the road and too little time is spent on strengthening and balancing supportive structures. “If runners focused more on the inclusion of core exercises, flexibility/mobility training and functional movement development, they would get better results and their injury rate would be lower.”

PROUDLY SOUTH AFRICAN
Sport and South Africa are in his blood. “I started feeling fit for the first time when I joined the navy. It was like a drug. I realised the power it gives you mentally, physically and emotionally,” says Richard, who himself matches his elite athletes on every level while training.

The international sporting scene has been good to him, but he admits to getting tired of living in hotel rooms. “I love what I do. If I don’t have pressure, I don’t do well. For me the beauty of the international sport scene is if you don’t get a result, you are out. That means one needs to constantly find ways to make it happen. The only thing that counts is whether you make a difference.”

For now, 37-year-old Richard will continue travelling, training and treating Asia’s foremost sporting hero Li Na, and other top international athletes, but he hopes to settle back in South Africa within the next two years. “This country is in my blood and I would love to be home more and make a difference here.”