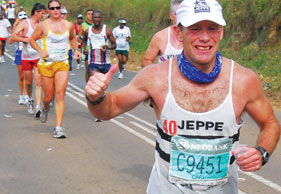 Interviewing Carl Peatfield once again made me realise what special people some of our fellow ‘Modern Athletes’ really are, and just how much we take for granted every time we put on our running shoes. Have you ever wondered what the story is behind the person you are passing or being passed by during a race? If you are a regular on the circuit, chances are you may have been passed by Carl Peatfield. Here is his story.

When someone mentions cyanide poisoning, you generally think about the World Wars or James Bond movies. A fatal dose for a human can be as low as 1.5mg per kilogram of body weight. Carl Peatfield is one of the few humans alive to have survived an acute dose of cyanide poisoning and lived, not only to tell the story, but to become a truly remarkable Modern Athlete.

CARL, THE RISING STAR
In the 90s Carl was a tough runner of slight frame with a good head for ultra distance racing. He was starting to show phenomenal potential on the road and by 1999, had completed ten consecutive Comrades Marathons, running five bronze and five silver medals, with a best time of 7:00. Many of his club mates believed he was well on his way to breaking the magical 6:30 mark. He simply loved running. He trained hard and his pocket battleship style earned him the nickname ‘Mighty Mouse’ on the road.

ONE OF THE BOYS
Off the road, Carl was well liked. He loved being in the company of the local boys and enjoyed a social beer. In fact, he earned himself a second nickname, ‘Rush Hour’. His wife in those days used to keep close tabs on him, so when he met the boys at the local pub for a ‘quick’ beer, he only had an hour to have a few cold ones. This translated into one beer every ten minutes, or a six-pack in ‘rush hour’.

A LIFE CHANGING DAY
Carl worked as a general manager for Ergo in Brakpan until his life changed one day in November 1999. The staff was doing general maintenance on a tank at the plant when Carl got a call on his radio, informing him that a worker, Aiden Laurence, was down with a cyanide leak in an open-ended tank. Carl immediately ran to the tank and without any regard for his own safety, he and a fellow employee, John Ruff, got Aiden out. Sadly, it was all to no avail as Aiden died. Carl and John, though alive, had taken in huge amounts of cyanide.

Carl was rushed to Milpark Hospital and declared 85% dead. He was in a coma for seven days and the prognosis was that if he survived, he would never be normal again. But Carl was a runner in great endurance condition and had a tough head on his shoulders, and he was going to fight to the bitter end. Carl did recover, eventually coming out of his coma and slowly starting the long road to rehabilitation. A disconnection in the signals sent to Carl’s brain meant he had to learn to walk again with the use of footmark decals on his floor at home. He was officially declared ‘disabled’ and released from Ergo. Carl’s colleague John, also suffered some serious injuries and today still battles with speech.

FIGHTING BACK
“At first I could not walk. I needed help with everything, even tying my shoelaces, but I slowly started walking. Nearly eight weeks after the accident – on New Year’s Day – I walked alone around the block! Those were my first steps to recovery. And that was the day that I knew I would run again,” says Carl.

With the help of his club mates, Carl eventually made it back to training. His first ‘race’ was about three months after the accident. Carl asked his wife to drop him at the 5km-to-go marker of the Johnson Crane Marathon in Benoni. “I waited for my club mates and walked/ran with them to the finish! I kept on training. Club mates such as Barry Holland came to my house and ran with me. I even kept a logbook.”

In the middle of 2000, Carl ran his first 10km race and in April 2002, completed his first marathon in a time of 3:45. Being a true Modern Athlete his goal wasn’t just to complete these runs; it was to get back to the Comrades Marathon!

A LITTLE HELP FROM MY FRIENDS
The break in transmission signals in Carl’s brain meant that he needed a push in the back to start moving forward. It also meant that he fell forward more often on the runs. Grazes on his hands and knees saw him resort to running in leather gloves and using knee pads. He persevered and did the unthinkable; he entered the 2002 Comrades Marathon, less than three years after being in a coma.

He had some great club mates and friends who dedicated their time and training to help this remarkable human being run his dream race. Alfie Pain, Eddie Oliver, Declan Kavanagh and Dario Scaggiante trained with Carl. Because he was so unstable, these athletes made the decision to run Comrades with Carl strapped into a ‘harness’, while they held the straps on each of the four corners. “I was going to try and run alone, but the night before the race, Alfie phoned and said he had a harness for me. The next morning Declan, Dario and Eddie also pitched up!”

Carl can only remember some parts of that incredible day in 2002. “The harness was quite comfortable. The guys held onto it and it helped, especially on the downhills where I usually fell forward. I remember going through halfway with twelve minutes to spare. The guys kept on encouraging me. I never wanted to give up. I knew we would make it!”

But Carl and his team were cutting things fine. Dario had fallen off the pace and Eddie, Declan and Alfie were starting to feel the exhaustion. With ten minutes to go, a huge crowd had gathered on the bridge entering the stadium, not knowing whether or not Carl would make the cut off of 11 hours.

A huge cheer broke out and people started hugging each other and crying as Carl came into the stadium, pulling Eddie, Declan and Alfie in tow. “I couldn’t see the crowds properly, but I could hear them cheering ‘Go Carl!’ Tears streamed down my face.”

This little Mighty Mouse had found the strength to run all the way and nothing was going to stop him getting to the finish. They crossed the finish line in 10:55. Carl and his loyal friends had just created one of the most memorable moments in the history of this great race.

CARL TODAY
Today there are still many things he struggles with. Carl runs unassisted, but still falls every so often. Occasionally, he ends up in the medical tent because he has forgotten to drink enough and becomes dehydrated.

He has completed seven Comrades Marathons since the accident and even got a Bill Rowan in 2009. He enjoys Two Oceans and recently ran the New York City Marathon and the London Marathon. Carl’s style on the road is very distinctive; he tends to slap the ground hard with one foot and, though he looks awkward, his determination to get to the finish is incredible. “My body has become used to the way I run, but I get frustrated because I still sometimes fall.”

He works as a road leader at the Edenvale branch of Run/Walk for Life. Carl can often be seen riding his bike in the neighborhood. “I go everywhere with my bike! In the mornings I ride to gym and afterwards I go for a run. I also run at night and try to do about 90km a week.”

He met his partner, Gale Visagie, at RWFL and they often train together. “She keeps me motivated and inspired. My kids, Robyn (19) and Gregory (15), also play a huge role in my life.” Carl says his many friends (amongst others Mario Alvares, Tony Da Silva and John Pimm) hold a special place in his heart.

“A positive attitude and self belief have brought me this far.” In a motivational speech, Carl explained his theory of how to live: “It is no secret that life can be full of difficulties. Sometimes when things go wrong it can seem almost impossible to maintain a positive attitude. Just remember, tough times don’t last, tough people do.”

Running has kept Carl alive and motivated; it gives him a reason to get up in the morning and to look past what happened to him. It makes you realise how lucky we are to run as healthy, full-bodied athletes and how incredible and special some of the Modern Athletes who share the road with us really are…

THE EFFECTS OF CYANIDE POISONING
Cyanide affects the cells of an organism such that they are unable to use oxygen. Inhalation of high concentrations of cyanide causes a coma with seizures, apnea and cardiac arrest, with death following in a matter of minutes. At the first stage of unconsciousness, breathing is often sufficient or rapid, but the victim falls into a coma and usually cardiac arrest follows, as the cells can no longer process the oxygen that the body is receiving through respiration.