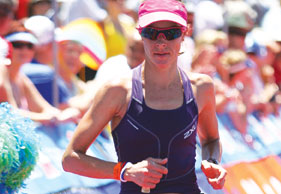 She is doing what many sport crazy athletes dream of every day, training full time and competing in some of the most exciting races internationally. Caroline Koll, one of South Africa’s top female triathletes, describes being a professional triathlete as the best job in the world! She is living her dream, but success comes with hard work.

To explain the origins of one’s athletic career requires a significant amount of retrospection. The reason one embarks on a journey in endurance sport is most often a quest for self satisfaction. I cannot recall a specific day when I decided to become an athlete, nor have I ever considered myself to have exceptional natural talent. Rather, talent and success came with hard work.

FAMILY TIES
I was born to immigrant parents, a stern German father and an even sterner French mother. I am sure that I acquired my adventurous side from them; after all, to come from ‘civilised’ Europe to darkest Africa in the 60s was no small feat! My schoolteacher mother instilled a strong sense of discipline in my older sister and me from a young age. In fact, education was considered of primary importance, and there was no play until the homework was done, and I mean all the homework!

I come from a non-sporting family, so my initial enjoyment of sport actually came from outdoor play with the local neighbourhood boys. I was not strong enough to tackle for a rugby ball (and it hurt!), so I employed the strategy that if I ran fast enough, I wouldn’t get caught or hurt! Climbing trees was also a firm favourite. It required a slight build, agility and brains. I became an accomplished tree climber, and this could have become my career of choice, were it not for the day I decided to see if I could ‘fly’ out of the tree, and fell heavily to the ground, tearing all the ligaments in my ankle. My thinking was that at least I had tried, and discovered for myself what was and wasn’t possible. It is very much this line of thinking that has driven me through my sporting career.

FINDING MY WAY
My first taste of conventional sport came in primary school, where, fortunately, I was exposed to a variety of sports. Having been blessed with poor eyesight (I say blessed because it forced me to focus harder on the things that I could do), I was obliged to wear rather thick glasses that, apart from being cumbersome and impractical, often caused me to bear the brunt of school bullies. I decided that if I could be better than those kids at something, they could not take that away from me. I started off my quest with a variety of sports, but it was swimming and running that I enjoyed most in the PE classes.

As I mentioned, sports in my home was never a priority, so there was never a chance that my parents would send me to a coach of any sort. Besides, at that stage I thought only good athletes went for coaching. I never suspected that you might actually go to a coach in order to become good! So my inspiration came from watching my mother, who can swim only breaststroke (and never gets her hair wet), and my older sister in our little pool at home. My sister, four years older, was naturally bigger and faster and I remember finding this very annoying. I decided that if I couldn’t beat her, I would swim further than her! I would set challenges for myself, like swimming a hundred lengths of the pool (which measured a whole ten metres in length). Eventually, when my eyes were bloodshot from the chlorine and the sun had gone down, my mother would threaten me with a hiding if I did not get out of the pool! Even though I could hardly see a thing without my glasses (and I couldn’t swim with them on for practical reasons), I enjoyed the school swimming galas and was especially proud that I did not come last!

MY LOVE FOR RUNNING
It was in high school that I developed my love for running. I tried almost every sport available at the school, but with a complete lack of hand/eye co-ordination, I was usually the last one picked for any team! The school athletics season brought with it requests for anyone who was willing to run, especially in the middle and longer distances. I was ‘anyone’! With a bit of encouragement from the high school coach, I soon realised that I could actually run quite well, and I went on to win some 800m events at the inter high school league meetings. No serious achievements by a long stretch, but it developed the love for running and competition that I have today.

TRIATHLONS
My involvement in triathlons only came about at age 20 when I was a student at Wits University. With no access to a club and no car to get to races, I was at a loose end when it came to athletics and merely ran at home to keep fit and get some air. It was at the local gym that I saw a leaflet for a triathlon taking place in my hometown of Benoni. I decided I was up for the challenge!

My first triathlon was a challenge to say the least. Even though I was a capable swimmer, I didn’t realise that one actually had to navigate and by the end of the swim, I found myself firmly planted in an outcrop of reeds, and firmly in second last place! I did finish the race that day, and it became the starting point of my career in triathlon.

When it comes to triathlon, the driving factor for me has always been the belief that I could do better. Even if you win a race, there is always someone out there who is better than you and can beat you. Chasing your best performance is what defines the dream.

RACING ABROAD
After completing an honours degree in politics, I decided to spend a couple of months racing abroad in France. I did some research and eventually found a club that was willing to take me on, just outside of Paris. It was a brave move, going overseas on my own, not knowing anyone, but it turned out to be one of the best life experiences! Having won the junior ranks back home, I thought that this would continue in the French club races. Instead, I got a whipping of note! The triathlon clubs in France are very well organised, and the standard, even back then, was very high. I ended up consoling myself with French pastries, but determined to come back a better athlete. For the next few years I worked at a local bike shop back home, which hardly made me rich but allowed me more flexibility to train. I would save every cent I made to go and race in France during the SA winter. Every time I went back, I would get a bit stronger and a bit faster. The experiences I gained there, I could not have gotten staying home. I eventually started gaining podiums and even winning races in France, which was highly motivating for me. I relished in the atmosphere of the French races – I mean where else in the world are you served lunch after the race? Meeting other athletes from all over the world was also a very enriching experience. Even to this day, I have friends stationed in all corners of the globe!

LOCAL BREAKTHROUGH
Locally, the breakthrough year for me was 2003 when I won the elite category of the South African Championships. It was a surprise for some, but I wanted nothing more than to prove to myself that I could win. Unfortunately the Olympic dream was never going to happen for me. We were required to race the World Cup Circuit and obtain sufficient points to be ranked in the top 50 in the world. At the time, the cost of competing in these races was entirely our own and we did not receive any support at all. I tried, at great personal expense, but it was nearly impossible to maintain a top position when competing with wealthier nations who fully supported their athlete’s campaigns on the circuit. Apart from that, I don’t think that I ever swam fast enough to get into the front pack of an international race and be a serious contender.

IRONMAN
My interest in long course triathlons came from reading the exploits of Raynard Tissink, who I think has played an integral role in bringing the lure of Ironman events to South Africa. At the age of 23 I did my first Ironman in Gordon’s Bay. Ironically, I had had an altercation with a car three weeks before, and broke my ribs and collar bone. I ended up in hospital and in my delusional state was apparently causing quite a scene because I was afraid of catching the flu from the other patients! The doctor told me to rest for six weeks. I told the doctor I would rest for three days. True to my word, I was back in the pool three days after the accident, and three weeks later, I raced my first Ironman with a broken collar bone. I finished way down in 11:35, but the challenge of Ironman was real! Competing in an Ironman is primarily a challenge to one’s self, and then a competition against others.

I have since competed in many Ironman races. I can’t remember how many. For me, it is only the last one that counts and how you are going to improve in the next one. Sometimes you take a step forward, other times you go backwards, and that is what makes racing the Ironman so hard. I have finished on the podium (third in Ironman Korea 2006), and I have failed miserably, even walking 28km (Ironman Cozumel 2009)!
When people ask, “When are you going to give it up and get a real job?” I can only reply, “I have the best job in the world – chasing my dream!” How many people can honestly say that?