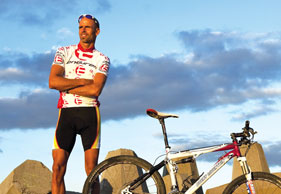 The DUESOUTH XTERRA Series, part of the XTERRA World Circuit, is known as the
‘Down-to-Earth’ Triathlon Series. Anyone with a passion for great outdoor sports is encouraged to participate. Despite its fun aspect, the race attracts top competitive athletes. The XTERRA full race consists of a 1.5km swim, 25km bike and 10km run. Nico Pfitzenmaier, a German athlete living in South Africa, finished third at the recent SA Champs in Grabouw. He shared his experience with Modern Athlete.

Even though I’m German, my whole body functions better in the warm weather. In my previous life I must have been a warm-blooded lizard! In 2004 I decided to live my dream by becoming a triathlete and travelling the world. The following year, I came to South Africa to compete in the Ironman.

After Ironman, Lieuwe Boonstra (a top South African XTERRA triathlete) and I competed together at the DUESOUTH XTERRA SA finals in Grabouw, my first South African XTERRA event. I fell in love with South Africa, its fascinating culture, the amazing landscapes and the friendly, active people. I decided to move here in 2006.

Sport has become a lifestyle. Being outside in the sun, fresh air and nature makes me feel alive.

It is fantastic to see how the DUESOUTH XTERRA in South Africa has grown over the last two years. The standard of the race is world class.

My preparation for this years’ race was not great, so my focus was to have fun and get some publicity for the Earth Child Project, a charity in Kayelitsha that I raise funds for. I was relieved that we were allowed to race in our wetsuits. I have been known to swim like a rock and cycle like a rocket! In the swim I did not push hard, but on the bike I put everything in. About 3-4km into the race I spotted Kent Horner and Dan Hugo, two of South Africa’s top XTERRA athletes. By the time I had made up three minutes on Kent, Dan put the hammer down and distanced himself from us. I made up some time on Kent and reached the transition in second place.

The heat was on in the run and Kent caught me quickly. The toughest part was the steep Jeep track. On the top of the mountain, we saw the most amazing views. With a big smile I crossed the finish line and dove straight into one of the big ice tubs!

My main motivation to race is to encourage others to enjoy sport. I want to create an awareness of fun, respect for others and a sense of community amongst athletes.

The first leg of the 2010/2011 DUESOUTH XTERRA will take place at the Pezula Private Estate, Knysna on Thursday, 8 July 2010 as part of the Pick n Pay Knysna Oyster Festival. For more information contact (021) 883 2413 or visit www.stillwatersports.com.