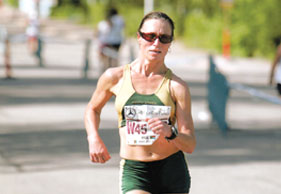 When Maria Ghisleni first took up walking, she saw it more as an opportunity to keep fit and healthy while getting some fresh air, instead of just doing Jane Fonda-esque aerobics in the gym, but soon the racing bug bit and today she has quite some record to show for her efforts.

I began to walk 15 years ago but only started race-walking seven years ago. I progressed from the usual power walking that everyone knows to the race-walking style that everyone finds so strange (including my children). There is a big difference between walking and race-walking. Race-walking flows, the feet roll continuously, the knees straighten on heel contact and remain straight until under the body. And of course, the rule that most people are aware of: contact with part of one foot on the ground at all times. It’s a beautiful but technical sport that can be mastered and enjoyed by all.

I have always enjoyed any form of exercise. At both primary and high school level, I participated in numerous sports such as athletics, hockey and netball. Thereafter I started my teaching career and had less time to participate in team sports. I kept fit by going to the local gym. Jane Fonda was the favourite in those days and we all had to slog away till we felt ’the Burn!’

A number of years and babies later, I joined the Bedfordview Health & Racquet Club. One of the classes offered at that time was a ’walking and exercise class‘ on the fields. This appealed to me, to be out in the open air. Walking and exercising on the field progressed to faster walking on the road. We then heard about organised walks on Sundays. These were organised by Run/Walk for Life and would vary in distance. The challenge at that time was to see if I could complete the distance.

Like all walkers, I thoroughly enjoyed the companionship on these walks and obviously, I did a lot of walking and talking. However, I noticed that there were some fast walkers who would fly past me. Their walking styles were very different compared to my half marching/plodding walk. They seemed far more efficient and much lighter on their feet. But at that time I was more focused on distance than style and continued to challenge myself by walking longer distances.

OFF TO THE RACES
I entered the Brenner’s Toyota Walk (now known as the 702 Walk the Talk), which was held at the Johannesburg Zoo in those days, and completed my very first 21km. My goal thereafter was to walk the 42km. For this I did some training and surprisingly, finished as second lady in 1998. The bug had bitten; I then wanted to see if I could win the race if I actually did some dedicated training. Three years later (2001) I won the marathon, and did so again in 2003 and 2004. My best time was my 4:26 in 2007.

I have also competed in a number of 30km and 50km races, and even in the well-known Cape Times Big Walk 80km. My friend and old training partner, Monica Risk, and I decided we would do the 80km together in 2003. We went with the casual attitude that we were going for a whole day’s walk. We did a minimal amount of training and walked and talked the whole way. Monica still managed to finish in third place and I finished fourth. Our times were not the greatest, but we created some very happy memories and we solved the whole world’s problems along that 80km walk.

By then I had improved a great deal on my walking technique and had become far more serious about my walking. In 2004, I joined the Wanderers Walking Club run by both Barbara Nell and Gail de Zabo. There my coaches gave me a training programme and worked on my technique. My goal had altered: distance was no longer important. I now wanted to improve on my speed as well as my style. I wanted to break 30 minutes for a 5km and 4:30 for a marathon. They helped me to achieve both. They encouraged me to compete in track events, which meant joining CGA Masters. At Masters one is able to compete in five-year age categories. The fast track work helped to improve my times on the road and, as it is a judged race, I was forced to focus continuously on my technique. I must admit that I still struggle with the mental side of going around a track 12 and a half times for a 5km. 10km and 20km races are not raced on the track but on a fairly flat piece of road, usually a 2km lap. Under Barbara and Gail’s continued guidance, I have grown from strength to strength.

VITAL SUPPORT
However, I do have to make mention of a person who in the past four years, tweaked my technique to make it what it is today. It’s still not perfect, mind you, but walking is like yoga: there is always room for improvement and to strive for perfection. This is a person who has always supported me and encouraged me in my training and has been at all my important races: my husband, Vincent.

An ex-runner, Vincent began walking with me in 2003 when I desperately needed a training partner to train my longer distances with me. I had been selected by CGA to compete in the 20km SA Road Walking Champs. My husband first ran next to me and then, as he got fitter, did more and more walking. He found he quite enjoyed being out on the road again and his old running injuries did not worry him when he walked. He improved in leaps and bounds and picked up the race-walking technique far more quickly than I ever did. Within two years he was top of his age group (45-50) and had fantastic times: 23:17 for 5km and 1:44 for 20km.

MASTERS CHAMPS
In 2007 we trained together, coached by Gail and Barbara, to compete in the World Masters in Italy. Unfortunately, Vincent picked up an injury about a month before we were set to leave for Italy. Race-walkers, like runners, continually have to guard against injuries by stretching, building up core and muscle strength, and increasing mileage gradually. Vincent’s injury still aggravates him whenever he does really fast walking and he has now decided to cycle instead.

In 2008, we were awarded SA Colours for race-walking, a proud moment for both of us. In 2009, we competed once again at the World Masters in Finland. My goals, as always, are personal. I always focus on myself in a race and set myself times. Should I get a placing, that’s a bonus. My personal goal is more important than beating someone or coming first. In Finland I achieved my goals in both the 5km and 20km. I did my best times in both these races and had the added bonus of achieving a bronze in the 5km (26:38) and a silver medal in the 20km (1:54). I did not reach my goal in the 10km (55:48) race as I had done better times in SA. Another added bonus was that I was privileged to be part of the SA walking team, consisting of three members, in both the 10km and 20km. In both events, the team placed first and we won gold. Finland was a wonderful and fulfilling experience.

TRAINING REGIME
My training is very similar to that of a runner’s. It consists of five stages:
•    Base phase (establishing a foundation of fitness).
•    General phase (building on the foundation, including some faster and longer distances).
•    Strength phase (building muscular endurance).
•    Specific phase (workouts tailored according to your goal).
•    Finally, the taper before the race.

Just like runners, walkers do speed work and hill work, although the gradients of our hills are less, to ensure that we maintain our style at all times. I train at least six times a week and even do double sessions on certain days. Most of my training is done in the Bedfordview area with the Bedfordview Club. Every Tuesday afternoon, I train at Wanderers on a grass track. There my style is checked by my coaches to ensure that I have not picked up any bad habits, which is very easy to do. I go to gym at least three times a week.

FOLLOW ME
My advice to all people who wish to become active is to try walking. Everyone can do it! Should you already be a walker but wish to increase your speed, then I suggest you learn the race-walking technique, either by attending a race-walking clinic or joining a club such as the Wanderers Walking Club. You might enjoy it so much that you’ll decide to become more competitive (whether it is for yourself or amongst others). There is a whole new world of race-walking awaiting anyone who wants to try.

What are my future goals? To walk faster and improve my times. How is that possible at the age of 50, you may ask. I just have to look at my coach and mentor, Barbara Nell, a Springbok walker aged 55, whose times are still way faster than my own, and I reason to myself that if she can still walk at that speed then I still have room for improvement. I hope to do well at the next World Masters in Sacramento in 2011. God willing, I will be there to compete and have another opportunity to achieve my personal goals. And who knows, maybe you could be there. Whether you are a runner, walker, long jumper or discus thrower, all Masters (30 years and onwards) are welcome to compete at the World Masters Athletics. Hope to see you there.