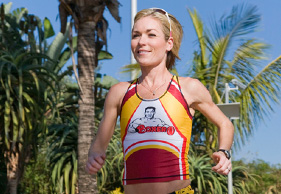 She has been running for as long as she can remember and over the years, won a couple of races in her home province, KZN. But it was only a year ago that Jenna Challenor decided to take running seriously and now, there is no stopping her! She was recently awarded SA Colours in Cross-Country and won two team medals at the 10km and 21.1km SA Champs in 2009. To top it all, she was also the sixth lady home at the Two Oceans Half Marathon last year and is hoping for an even better placing this year.

“It has been an awesome year. I have travelled all over the country to compete. I started training with my coach, Andrew Daly, about a year ago. He is passionate, dedicated and supportive,” says Jenna, a mother of two young girls. Until a year ago, Jenna tried to combine a full-time teaching job and part-time work as a photographer with motherhood and training. “It was a bit of a juggling act and I decided to give up teaching and concentrate on photography and my training.”

PRACTICE MAKES PERFECT
She runs between 130km and 140km a week. Her training before big events includes a morning run of 6km followed by a midday track session of about 12km. She finishes the day off with another 6km session and reserves weekends for long runs. “I specialise in 8km cross-country, and 10km and 21.1km races. I would love to run marathons and even Comrades, but I first want to enjoy the short, fast races.” Jenna mainly trains with her husband, Brett, a Springbok lifesaver. “Running is our special time together. Brett knows what it takes to get to the top and this helps me achieve.”

CHALLENGES AND GOALS
Jenna has had some disappointments. Last year she battled with tonsillitis eight times in one year. “Every time I raced or trained hard I got sick. I eventually had my tonsils removed. Getting back into competitive running was very hard,” says Jenna, whose mom has completed ten Comrades Marathons.

Jenna’s goal for this year includes being selected as part of the SA Cross-Country and 21.1km team for the World Champs. Her greatest competitors (and friends) are Ren? Kalmer, Annerien van Schalkwyk and Poppy Mlambo. “On the starting line we race but off the line we are good friends.”

Her advice to novices is to not expect too much initially. “Everyone had to start somewhere, even the top runners. The first two weeks of training will be hard and you will want to give up, but persevere. Running gets addictive!”