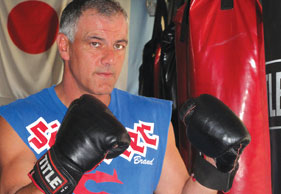 Running plays a large part in almost every sport practiced at a competitive level. We explore running’s role in combat sport by speaking to Charly Palos, former SA judo champion and kickboxing coach to average Joe’s and well-known sporting stars.

Kickboxing, judo and boxing are not for the faint-hearted. They often leave you sore, bruised and sometimes even bloody. These disciplines are high-intensity and high-impact forms of exercise that require speed, flexibility, strength and endurance. And on top of all that, while working out you are being punished by your opponent, which saps even more of your energy.

Therefore you need to be super fit. And there is no better way to get fit than through running, says Charly Palos, kickboxing coach and former world-class combat specialist. In his younger years Charly won SA national judo titles and earned his Springbok Colours in shootboxing, a combat sport which allows kicking and punching. At the peak of his career he was amongst the top ten shootboxers in the world.

These days, Charly specialises in teaching kickboxing to individuals who choose to use it as a form of fitness and self-defence. He teaches from his gym at the Italian Club in Bedfordview. His students include sporting stars such as former rugby player James Dalton. Charly is also involved in other forms of combat sport, and works closely with professional boxing coach, Manny Fernandes, who has trained numerous world champions as well as Alfie Stevenson, a seventh Dan national Olympic judo coach.

A DAY IN THE LIFE
“One has to be very fit and flexible with excellent hand/eye co-ordination when partaking in combat sport,” says Charly. Kickboxers train anything between three and four hours a day. A typical training day includes a morning and an evening session. The morning sessions are usually reserved for cardiovascular exercise. “We start off with a 5-7km run, immediately followed by a skipping session of eight rounds. Each round consists of three minutes of hard skipping, with a minute rest in between.” The skipping session is followed by about 20 minutes of shadow boxing, a training method where kickboxers and boxers shadow box in front of a mirror to improve their footwork.

The evening session consists of punching drills to improve flexibility as well as hand/eye co-ordination. “We start off with training different boxing combinations by punching and kicking the bags. This lasts up to an hour.” This is followed by a 20-30 minute session with focus pads. “Your partner holds the pads while you box or kick into them. Often your partner will call out different kicking and boxing combinations for you to follow,” Charly explains.

An important part of the evening session is sparring, a training method in which partners fight against each other, but without the aggression that is usually part of a competitive fight. “We fight five rounds, each one lasting three to five minutes.” The evening training concludes with a conditioning session; kickboxers drop a medicine ball onto their stomachs to strengthen these muscles. “This lasts up to ten minutes before we finish off with about 100 push ups and another 100 press ups.”

FIGHTING FLAB AND GAINING FITNESS
Charly encourages all the sportspeople he trains to incorporate a daily run of 5-7km into their training routine. “Since starting these runs, they have all gained greater leg strength, improved their breathing technique and some have lost weight.”

Keeping weight down is usually a big issue, especially for those who compete on a professional level. “In our game we always have to cut weight because we compete in different weight categories. One of the greatest benefits of running is the weight loss that often accompanies the sport. Running is an excellent way not only to get rid of excess weight, but also to maintain a certain weight. Also, running requires discipline and it is this discipline that fighters need to take into the ring when competing.”

SPORTING PASSION
Charly runs about 70km a week and has completed the Two Oceans Half Marathon twice as well as numerous other road races. He has just qualified to run his first Comrades this year. “Running is incredible. It keeps me healthy and the endurance benefit I have gained from it is absolutely fantastic. Though I mainly coach these days, I have to be fit and in shape.”

“Sport is my life. If it wasn’t for combat sport, I would have been doing some other kind of sport. I am just lucky that I have the ability to fight and coach. And I am very happy that I can add running to my training routine. It is a sport that you can do well into
your 70s!”