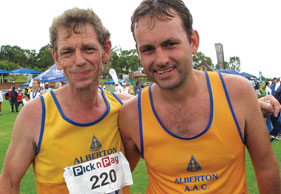 The Pick n Pay Marathon has in the past been voted one of the best marathons in South Africa, and this year’s race once again proved why. The race attracted a record number of entries (about 5 400 entrants for the 42.2km and 21.1km) while the newly-added 4km and 8km events attracted a further 800 entrants. Cool weather made for good running conditions while excellent race organisation added to a successful and fun day for all. The marathon saw many novices running to qualify for Comrades 2010, including Naylor Kruger, who shares his race experience with Modern Athlete.

As a young boy I always wanted to run the Big C, but never really had the drive or the motivation to pursue my big dream. My dad was hijacked and killed in 1998, and some of my best memories of him include doing 8km to 10km runs together. Like many novice runners, I decided 2010 was the year to run Comrades and in doing so, I would dedicate the run to my dad.

I started training with a bunch of really dedicated and experienced runners in the south of Johannesburg where I live. I ran the Dis-Chem Half Marathon, as well as the Johnson Crane Half Marathon, so I decided it was time to tackle the Pick n Pay Marathon. A week before the marathon my training group ran a 30km route in Suikerbosrand Nature Reserve. Well, all I can say is that it felt like running up Kilimanjaro. The last 10km made me doubt my abilities to run a marathon, but I pushed through.

The day before the race was terrible! I don’t know if it was nerves or a stomach bug, but I was as sick as a dog. The last thing I had to eat was on Saturday morning. On top of that I did not sleep well the night before; everything was really not going according to plan! On race day I decided to start the marathon and if I wasn’t feeling well, I would only run the 21.1km.

So there I was at the start; ready or not, it was time to go! I started easy, got into a rhythm and at the 15km mark, I knew I would go for the Full Monty. I must admit at the split of the 21.1km and 42.2km, I was tempted to carry on straight, but I bit the bullet and turned right, under the bridge, to try and run a distance I had never run before. Oh boy, it was ten times tougher than I expected. Luckily at the 20km mark a training buddy and experienced runner, Sean Scott, caught up with me. If it wasn’t for him I would not have come close to the time I finished in. He ran all the way with me, chatting away and advising where to slow down and where not to walk – as much as I wanted to.

The last 5km were hell. My feet, my knees, my muscles and places I never knew existed started to ache. I realised at that stage it was a mind game and I had to take it kilometre by kilometre. It felt like forever to reach the finish – I didn’t think I would ever be so glad to see the end of a journey. I crossed the line in 3:53. It was without doubt the toughest thing I had ever done to my body. And the scariest thing is that this is just the beginning of a long and hard journey towards Comrades in just a couple of months, where I have to run double this distance!

After the race I was looking forward to a well-deserved rest at home… but as luck would have it, the race was run on Valentine’s Day and I had to spoil my wife!