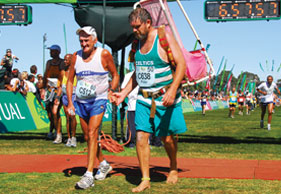 Peter Taylor of Cape Town has been running the Old Mutual Two Oceans 56km Marathon barefoot for the past 26 years, to raise funds for SA Guide Dogs for the Blind. Not surprisingly, his bare feet have elicited many a quizzical response…

A few years ago, Peter Taylor was 40km into the Comrades Marathon and staring up at a major 4km climb when he had a momentary sense-of-humour failure. When he passed a group of men standing around a braai with beers in hand, and they asked him where his shoes were, instead of his standard reply of, “My wife took them along with the Porsche,” he told them he’d forgotten his shoes at home and carried on running. Next thing he knew, there was a 14-year-old lad running next to him carrying a togbag full of shoes. “Meneer, we have all taken off our shoes and in the togbag I have size 7, 9, 10 and 11 pairs of shoes. You can have the pair that fits – and you don’t need to return them.”

It took Peter a while to convince the helpful youngster that he always ran barefoot. He had to show the boy that his timing chip was strapped around his ankle and then get fellow runners to back up his story before the boy finally believed him. The response was priceless: “Oom, I am going to tell my dad that you always run barefoot, but he will still not believe me, and after that I am going to have a strong dop with my dad, because sir, you are mad!”

GOING BARE
Peter ran his first marathon in 1984 but admits that he was far from properly prepared for that Peninsula Marathon. “My training consisted of two 8km runs, one 15km run and then a 21km run one week before the marathon. At 30km into the race, I was absolutely finished, so I decided to take my shoes off and walk to the finish. The next minute I was running again and from then onwards, I have always run barefoot. Two months later I completed my first Two Oceans, and today I have finished 23 Two Oceans with a best time of 5:00:04, as well as seven Comrades, at least 15 other ultra-marathons and more than 70 marathons – all barefoot.”

Peter initially ran for Atlantic Athletic Club, then joined Rand Athletic Club when he moved up to Johannesburg in the early 90s. Upon his return to Cape Town in 1999, he joined his current club, Celtic Harriers. His first love in running is the Two Oceans. He has started the race nearly every year since his 1984 maiden voyage, only missing out in 1995 when he failed to qualify (which is a whole story on its own – see next page). Of 25 starts, he has officially finished 23 times, unfortunately missing the cut-off in 1994 and 1997. “To me the Two Oceans will always remain the most majestic ultra in South Africa. Where else can one run around one of the top cities in the world, experiencing support from hardy and wonderful spectators year after year, through rain, wind and sunshine?”

After all these years, Peter’s training hasn’t changed much. “Unless I run Comrades, I stop running after Two Oceans. Not one kilometre until 2 January! Then, after the annual Christmas turkey and a few frosties, I start with 8km followed by a 15km three days later and then a 21km the next week. Thereafter my training consists of one weekly run of at least 28km, always including at least one long hill. Yes, I know, this training schedule doesn’t exactly follow standard running advice, but I believe that if I can complete 28km regularly, with a bit of blood, guts and vasbyt – and plenty of experience – I know I can complete Two Oceans within seven hours.”

Peter works as Parliament’s Representative Facility Manager, looking after the maintenance, upkeep and refurbishment of all parliamentary buildings in the Mother City. The 52-year-old lives in Rondebosch with his wife Sheila and two teenage sons, Travis and Brenden, and prefers only running a small number of races so that he can spend as much time as possible with his family, including being involved in his sons’ school activities and sports. He is also busy putting the finishing touches to revamping his home, having taken it from a single storey to a double storey, and in between that he works on his 12 old motorbikes, the oldest dating back to 1936.

Sheila, incidentally, was one of Professor Tim Noakes’ first sports science students. “She has told me many times that running barefoot is not right, but who listens to their wives?” jokes Peter.

FOR A GOOD CAUSE
In 1986 Peter saw a video of the London Marathon, where many runners completed the race in fancy dress to raise funds for charity, including Father Christmas suits and waiters with trays. “I thought, hey, I can also do some fundraising, since I already run barefoot. At that time there were a few blind runners taking part in the Two Oceans, with running partners to guide them, so I thought it would be a good idea to assist the blind runners. I also wanted to do something for animals, so I approached the SA Guide Dogs for the Blind, and they were only too glad to give their approval.”

But it wasn’t going to be quite that easy. “I was the first person in SA to raise money by running in a race, and I had to first get permission from everybody.” This saw him start with his own club as well as the organising club, Celtic Harriers, who in turn told him that he needed to get permission from the provincial athletics body as well as the various sponsors of the race. Finally, with all the paperwork in place, he set out in the 1987 Two Oceans with his ‘big, red, homemade rucksack’ on his back, asking spectators along the route and fellow runners to make donations by dropping money into the rucksack.

What started out as a small venture now requires his wife and sons to meet Peter along the route to empty the rucksack. “My family normally sees me near Lakeside and then at Constantia Nek to empty the money that I have collected. Besides becoming heavy, the jingle of coins sometimes annoys other runners who are not used to the noise.”

Admittedly, Peter says he doesn’t raise that much money during each race. “Disappointingly, I only manage to collect about R1 500 every year at Two Oceans, and it costs about R20 000 to train one guide dog.” That’s why he has now set his sights on a bigger target. “In 2011 I’ll be running my 25th Two Oceans – provided I finish this year – so I want to get a big company to sponsor me and do a big promotion to get more money. Up till now I think I’ve gotten more publicity than money.”

Nevertheless, Peter knows that his efforts are noticed. He says his highlight was when World Cup winning Springbok rugby captain Francois Pienaar singled him out a few years ago. “Francois ran Two Oceans and raised R100 000 for his charity, but after the race all he could talk about was this overweight, barefoot guy carrying a big rucksack who had passed him during the race.”

EPIC TRAVELS
As mentioned, Peter has only missed running the Two Oceans once since 1984. In 1995, while living in Johannesburg, he left qualifying to the last minute and on the last weekend before     entries closed, he had no choice but to head to Naboomspruit for a marathon being run there. “Off we went, myself, my wife and our six-month-old son, plus-minus 200km north of Pretoria. When we arrived at the Naboomspruit Police Station on Saturday night at 7pm and asked where the marathon would start the following morning, the answer was, ‘I don’t know about tomorrow, but today plenty people ran.’

“I didn’t want to miss Oceans, so I phoned my club secretary and heard that the only other marathon that Sunday was the Ixopo – outside Pietermaritzburg! So we drove non-stop through the night and arrived at Ixopo 20 minutes before the start, only to find out that it was pre-entries only. Luckily I was able to convince the organisers to let me run, but then between 20km and 36km there was one monster hill. Well, my body just said, you don’t have any energy because you did not get any sleep. The result is that I missed the cut-off time. So I got back in my car and drove back to Johannesburg. In 22 hours I had driven 1 900km, run 32km, made my family very upset, and not qualified for Two Oceans. That Easter I ended up going to the Rand Easter Show with my sister from Australia, instead of running in Cape Town.”

Having already missed the race once, Peter was not about to let it happen again a few years later when his sister-in-law decided to get married on Easter Saturday in Johannesburg. “I told her I wouldn’t be there for the wedding, despite the fact that I would be driving up to Jo’burg with my wife and two small kids to repair our house for re-letting after moving back to Cape Town.” So, three days before Two Oceans, he left his family in an empty house in Jo’burg and caught the train to Cape Town, arriving Friday afternoon and running the race the next morning. “Then I got back onto the train, arriving back in Jo’burg early Monday morning to be greeted by my ‘happy family’ and immediately got into the car and drove back to Cape Town so that I could be back at work on Tuesday morning. The best part was being interviewed by a radio station while on the train somewhere around Bloemfontein, trying to explain this all to them…”

STRONG FEET
After 25 years of running barefoot, Peter has pretty damned hard feet, but he says he still feels the mileage. “After Oceans and Comrades, my feet feel a bit bruised, and I do get stiffer because striking the ground barefoot is two to three times harder than for most runners in shoes. I’ve never had an injury from running barefoot, but if the texture of the road is stony or rough, I feel it, although only really on the arch because it is soft skin that never touches the road.”

“I personally believe I’m one of the few lucky people who can run barefoot, because I am a naturally efficient runner. If you pronate just slightly, don’t even think about it. If you’re just going to run a bit, barefoot is okay, but for marathons or ultras make sure you’re an efficient runner, otherwise you’re looking for an injury. And if you have soft or tender feet, just don’t!

“As long as I am able, I will continue to run the Two Oceans barefoot. So the next time you see this big overweight, under-trained ‘Zola’ carrying his red rucksack and raising funds for the SA Guide Dogs for the Blind, remember just how mad he is and throw some money into the bag, as all monies are gratefully accepted… especially notes!”