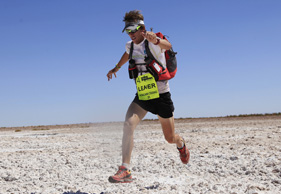 Last night I slept a lot better and it felt less cold…but I was probably just exhausted from the first days racing.

We started off the first section of stage two running in the slot Atacama Desert Race – Day 2…and nearly stage 3 too! Canyons; the scenery was awesome with a few river crossings. Yes, a river in the driest dessert in the world…but I was not complaining as the ice cold water was the perfect recovery remedy my legs needed. There was quite a bit of life along the river with wild donkeys, birds etc. Straight after the first checkpoint we headed up a pass, through an old mining tunnel and then up some more before running along a ridge with panoramic views of the desert. I was told the course was flat…..going by the last two days this is definitely not the case!! Just before checkpoint two we dropped of the ridge down a massive sand dune….it made look small!

The final two sections were flat, sandy, HOT and lonely….I was in the lead but I did not know by how much. I could see no one behind me so I decided to put it in cruise control and take an easy run into the finish…. or so I planned! But that only lasted for a few minutes…no pain and suffering was over rated and I decided to push on and get to the finish before it got too hot. The day nearly ended in disaster when I started following the flags for the start of stage three….luckily I realized something was not right and I did not end up wasting too much time. I finished 50mins ahead of the second placed runners so my lead is growing but the race is still in the early stages and anything can happen…

But for now all is good!!