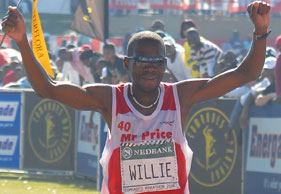 He was the first South African to win the New York City Marathon. He has won several SA titles and has held records over most distances in KwaZulu-Natal. He has also clocked a 2:08:15 marathon and has, over the years, consistently achieved at the Comrades Marathon, winning three silver and eight gold medals. Two years ago, at the age of 44, he surprised most people when he finished in the top ten at Comrades. Willie Mtolo’s running career spans over nearly 25 years and it seems that even now, there is no stopping him. He is without doubt one of South Africa’s greatest ambassadors of ultra running.

Willie Mtolo believes in sticking to a plan before a big race, even if it means taking his own portable stove, pot and porridge all the way from South Africa to New York…

THE NEW YORK CITY MARATHON EXPERIENCE
It was November 1992 and Willie was invited to run the prestigious New York City Marathon (NYCM). He is a man who believes in eating porridge the night before a race and he decided that the night before the NYCM would be no different. Willie and his wife travelled to New York and were booked into the top floor of the luxurious Hilton Hotel.

Two days before the race he asked the kitchen staff if they would cook his porridge on the evening before the race, but they had no idea how to cook porridge. When he volunteered to cook it himself, they declared that no guests were allowed in the kitchen. Willie decided that nothing was going to keep him from eating his porridge, and so he and his wife cooked the porridge in the hotel room on the portable stove he had brought from South Africa.

“Suddenly the fire alarm went off. The next thing we saw a fire engine stopping in front of the hotel! We hid the pot under the bed and were waiting for them to arrest us. Luckily they did not know where the heat came from. Later we covered the smoke detectors with towels and finished cooking the porridge.”

AN UNEXPECTED VICTORY
The next morning Willie became the first South African to win the New York City Marathon. He broke the tape in 2:09:29. “I was so nervous. I saw Mark Plaatjes. He was going to run but never started for some reason. His advice to me was, ‘Mtolo, be patient. Don’t worry if you see a Kenyan or an Ethiopian next to you. Run your own race. You can win this.’”

At the halfway mark Willie was amongst a bunch of six frontrunners, but at the 30km mark they broke away. “I was left behind but at the 35km mark I started catching them. The last 5km to Central Park was hilly and I knew I was strong on the hills. I ran as hard as I could and won! I could not believe it. My smile was so big. Nobody, not even my wife and friends, expected me to win. Only Mark had said I could do it.”

Willie, who turned 30 later that year, won prize money and a Mercedes Benz. It was too expensive to bring the car back to South Africa so he had to sell it in New York. The race will forever be etched in his mind. Though he had achieved results in South Africa before, his NYCM win made the world take notice of Willie Mtolo!

THE BIRTH OF A WORLD CLASS RUNNER
Willie is one of ten kids and grew up in the Underberg. Every day the Mtolo kids walked a total of 32km to school and back. “My dad was working for a farmer. He could not afford to buy us bikes. We woke up at 4:30 and started walking at 6:00. We got to school at 8:00 and in the afternoon, it was the same story. I believe this walking physically helped me in my later years.”

Willie did not run as a primary school boy. In Grade 8 he moved to Durban with his married sister and it was then that his talent started emerging at high school in Hillcrest. “I started running 3000m and 5000m and won the KZN School Champs before being selected for the KZN national team.”

A MEMORABLE TIME TRIAL
It was at the Hillcrest Villagers Time Trial in KZN that Willie was noticed as a young runner. One of his friends told him about the time trial and Willie was eager to test his skills over the 8km distance. “I broke the course record.” Willie, who ran in a pair of old squash shoes, finished in 25:08. He stunned not only the time keepers, but also himself. “Some people thought I cut short but the guy who ran behind me convinced them that I ran the whole route. Hillcrest Villagers bought me shoes and a tracksuit, and I joined their club. That night I thought I might have some talent.” From then onwards, Willie started competing in various road races, often winning or placing in the top five.

THE EARLY YEARS
In 1984, at the tender age of 19, Willie decided to compete in the Comrades Marathon, as Hillcrest Villagers had their eyes set on winning the team trophy. He finished 23rd in a time of 6:02:40, just missing the magical sub six-hour barrier. “Looking back I realise it was maybe not the best thing to run Comrades at such a young age. One should concentrate on shorter races when you are young.”

Barely three weeks after his first Comrades, he placed third at the Hillcrest Half Marathon, finishing in a time of 67:16. This race incorporated the Natal Champs and Willie was selected to run for KZN at the South African Championships in East London. He followed this with a win (43:16) at the 14km Daily News Big Run.

His first major race win came at the 50km JSE Marathon in odd circumstances. Willie describes this as one of the highlights of his career. He finished seconds behind the winner, who broke the tape in 2:47:37. The winner was then disqualified because he only wore one race number and Willie took his place.

Another highlight was in 1986 when he ran his best marathon time of 2:08:16 at the SA Champs in PE. Three years later in 1989, Willie’s second attempt at Comrades saw him finishing second (5:39:59) behind Sam Tshabalala, the first black athlete to win
the Comrades.

LIFE AFTER NEW YORK
After winning the NYCM in 1992, Willie returned home to a hero’s welcome. He took a break from the local road running scene and continued competing in international marathons, finishing second (2:10:17) at the Rotterdam Marathon in 1994 and fifth at the London Marathon in 1995. He returned to Comrades many years later, finishing second again in 2002, and in the top ten several times over the next couple of years.

Another major highlight was in 1990 when he won the Two Oceans Marathon. Twelve years later in 2002 he ran Two Oceans again, this time finishing third. Amazingly, his finishing time over this 12 year period only fluctuated by less than two minutes, which is a true indication of the quality of his running over time. “I prefer Comrades, especially now that I am getting older. Comrades is not about how much speed you have, but how strong you are.”

LIFE TODAY
Willie (46) is married to Sikile and they have four children. He has a farm in KZN, a house in Pinetown and a butchery in Pietermartizburg.

He is a gentleman who gives back to the sport that has given him so much. He is the proud owner of the Willie Mtolo Athletic Club in Pinetown and plays a big role in the development of sport in KZN. “We have about 67 members and I help some of the members with their training.” A few youngsters have achieved well at the KZN cross-country and road champs. “There is a lot of talent in the Underberg. We try to help with the development of this talent and get the youngsters to join a running club.” Willie also stages the annual Willie Mtolo Sports Day in his home village to encourage participation and development amongst the youth.

TRAINING
Willie mostly trains alone and runs between 160km and 180km a week. This is what his training programme looks like:

ADVICE FOR YOUNG ATHLETES
Young people should realise what sport can mean in their lives, says Willie. “Running has enabled me to travel and compete overseas. Most of the things I have are bought with money I have earned from running. One needs discipline in life and sport can help you to focus.”

He realises it is hard, especially for youngsters from rural areas, to get to races and to afford to run in big races. “One of the biggest challenges in my running career was often just to get to a race. Many times I did not have transport and I had to get up early to walk to the race. Sometimes I missed a race. It was not always easy. But it was worth it.”

COMRADES 2010
Training is going well for this year’s event. Willie recently finished seventh at the Peninsula Marathon (2:56) and plans to run the Two Oceans Marathon in his quest for a top five finish. Don’t be surprised if Willie is amongst the gold medallists on the day. We certainly won’t be!