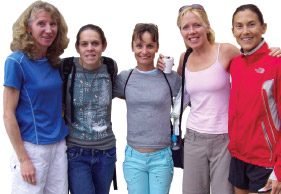 The International Association of Ultra Runners’ 50km Trophy Final was held in Gibraltar at the end of October 2009. It is the culmination of a series of qualifying 50km races around the world, with the best 50km runners in the world being invited to the final. The Old Mutual Om die Dam 50km was the only qualifying race in South Africa in 2009. who was sixth lady at the 2009 Comrades Marathon, and her clubmate from Nedbank Running Club, Lucas Nonyana, made South Africa proud by fi nishing third and first respectively. Here Lesley tells of their experience.

Our small South African contingent, which consisted of myself, Lucas, Herman Mokgadi and Steven Molepo, performed exceptionally well at our fi rst IAU event, despite initially struggling with visa and other logistical obstacles.

What a blessing it was to meet up with other runners from all over the world who share the same passion and lifestyle. The entire trip was amazing and well organised. The organisers went out of their way to ensure each runner’s needs were met. We stayed in a retreat centre in Gibraltar and each runner had
their own room. Meal times were set and the food was great – we had no problem carboloading before the race!

It was amazing how the bond of running united us all as friends and before long, it felt as if we were all part of a new family, even though it was only for a few days. We mostly spoke about what we all love… running, good food and not forgetting how great life is.

In the lead up to the race, the days belonged to us to do with what we pleased. Some of us enjoyed
spending time with our new friends, others explored new places and a lot of us just put our feet up in front of the television.

EMOTIONAL OPENING
The opening ceremony was an experience of a lifetime. All the athletes were emotional as we took our places behind the banners of our respective countries. The honour and pride I felt standing behind South Africa’s banner along with my teammates before marching into the stadium with an orchestra playing, was a privilege beyond words. As we listened to everyone making their speeches, I was thinking: ‘Is this for real?’ I knew no matter what the outcome of the race, it was great making it that far.

The evening before the race, we all gathered at a local restaurant for a pasta party. Overseas athletes are no different to South Africans: they also love to party! Luckily for most the race only started at 2:30 the next afternoon.

RACE DAY
On race day we all had a good breakfast and a hearty lunch! Suddenly the thought of having to run 50km did not seem quite so appealing. Anxiety began to take its toll on most of us, each runner wondering what his opponents were truly capable of.

We were taken by bus to the start at the lighthouse. The weather was overcast and misty, and we all hoped it would stay that way, but once the gun went off, the blistering sun was out.

Due to road works the route had to be changed. The initial five laps of 10km each were changed to a 2km loop at the start followed by six laps of 8km each. Mentally it was one of the strangest and hardest races ever. There were quite a few short hills which we repeated, but the most challenging part was
running through docks and tunnels with lots of turns, constantly passing and dodging each other. The field was small and once the 10km runners fi nished, it was great to encourage other 50km runners while we passed each other. Despite competing against each other, the team spirit amongst us all was amazing.

The water point was at the 4km turn point. Thanks to Lucas’ coach, Johan Britz, we had drinks and lots of encouragement on the other parts of the route. Initially I was in fi fth position before moving up to third at the halfway mark. Just before the last lap, I managed to catch up to Monica Carling, the Italian girl in second place, but at the watering point she had some concoctions from a tube… and suddenly she just took off! We should get those ingredients. I finished third and ran a PB of 3:38! I was very happy with my race. The fi rst lady home was Kami Semich (USA) in a time of 3:29 and the runner up was Monica in a time of 3:37. In the men’s category, my team mate and Comrades gold medallist, Lucas Nonyana, had a great race to finish first in a time of 2:58:04! Herman fi nished seventh and Steven 26th.

PODIUM TIME
After a hearty supper, it was time for prizegiving! What an honour it was standing on the podium knowing I would be taking home a bronze medal and a glass trophy for my country, and Lucas a gold medal.