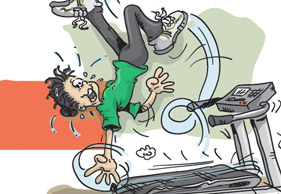 When you’re waiting, two months can seem like 20 years. With the 2010 J.P. Morgan Corporate Challenge only two months away, I was forced to look back at my 2009 training and take a critical view of how I was doing. With every day that passed, I became more and more worried, more panicky about my chances of actually realising my goal. Until about a week ago…

As December started to show its festive self and the residents of Jo’burg began to wind down, my commitment to running began to wane. No big surprise really, considering the efforts I had put into the year and the fatigue I was experiencing. Of course, putting a complete halt to my running would have been totally counterproductive, but I did start reducing my running sessions as exhaustion began to pull at my body and mind.

FALLEN HERO
One Friday morning, in an effort to push myself, I decided to try and work on my speed. The plan was to go to the gym, do a slow warm-up run and then alternate slow running with exaggerated speeds. For the first 15 minutes, I was a sports hero. In my mind, I was showing tremendous progress, focusing on my breathing, pushing my legs to do things I didn’t think they had the strength to do. What a superb example of athletic prowess I was! Until I fell off the treadmill.

It’s true that in the past I have fallen over tree roots, choked on water sachets and generally made a complete idiot of myself, but never before had I experienced a level of embarrassment comparable to what I felt on that day. With the treadmill going at a rapid speed, my feet were struggling to keep up and I had to hold onto the sides of the machine to stabilise. Because I was trying to put all my weight on my arms, my shoe caught on the moving treadmill and I couldn’t regain my balance. I was holding onto the sides of the treadmill, so I didn’t immediately fall, but was instead dragged for at least ten seconds before common sense activated and I let go. I landed on the ground, uninjured except for a bruised and bleeding ego.

Despite the reassurances of people around me that falling happens to everyone, I was mortified. I had to go and sit on the couch in the ladies’ bathroom for ten minutes just to get over the shock. I realised only later that I could take a lesson from the incident. My excessive confi dence and dreams of athletic
stardom had caused me to forget about safety first, a mistake I won’t soon make again.

HAPPY NEW YEAR
Although I made a few running attempts over Christmas and New Year’s, I knew instinctively that my body needed rest and that I wouldn’t be able to perform to the same rigorous standards as before. Time passed and Father Time transformed into the baby of New Year. With two months to go, I knew I had
to make a serious effort or I would never get my 29 minutes.

The first week of running in the New Year has come and gone and my panic bug, though still roaming around my thoughts, has been given a backseat in my subconscious. Suddenly, running is not as hard as it used to be. Suddenly, my breathing is more controlled, my legs aren’t as tired and I can run for longer stretches than before. And suddenly, this running thing makes sense. Thoughts of ‘I’m tired, I’m sweaty, I’m sore, I’m hungry’ are replaced with the sweet and contented feeling of ‘I did it, and tomorrow I’ll do it again.’

A great run has different but positive effects on everyone. For you, it may be a sense of pride in what you have accomplished. For the guy running next to you, it may be the satisfaction of a good workout, or a good time. For me, a great run is like a looking glass into the future. When I accomplish something that was really difficult, my fi rst thought is always, ‘If I did this, what else can I do?’

Though I’m not there yet, I am defi nitely running at full speed down the right road to reach my goal. And once I reach it, who knows what more I can achieve?