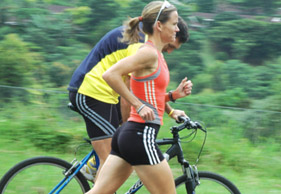 Tanith, a Durban-based athlete, has just received an elite entry into this year’s Virgin London Marathon on 25 April. “Competing in the London Marathon has been a dream for years. London is like a second home to me, having gone to school and later worked there,” says Tanith, who ran the fastest marathon time by a South African female since Elana Meyer in 2001, when she clocked 2:36 in the Warsaw City
Marathon in 2008. “I am hoping to run a sub-2:32 or better in London!”

At the time of writing, Tanith had also been invited to take part in the Xiamen Half Marathon in China on 2 January. She will be concentrating on the shorter distances up until mid-February, then build up her mileage for London in April. “I hope to participate in a couple of 5000m track races and 10km road races.”

Running international races is nothing new to Tanith, who competed in the Great South run in Portsmouth in the UK last year, although she fi nished a little disappointed in 12th position. “It was an amazing experience lining up with 35 000 runners for a ten-mile race. Unfortunately, I picked up severe Achilles problems and wasn’t able to put in the performance I wanted.”

Tanith’s running ability must be in the genes. From a young age she was seconding her parents in the Comrades Marathon. She was eight years old when her uncle won the SA Marathon Champs in Durban in 1983. “I was really taken with running and he actually bought me my fi rst pair of North Star takkies!”

A typical training day consists of two sessions. She does quality sessions in the morning, including track intervals or longer tempo runs on the fl at beachfront area followed by a gym session. In the afternoons, she runs 90 minutes as part of a recovery session. Her weekly mileage during peak marathon training is around 150km much part of my life that I would feel lost without it.”

Tanith prefers the half marathon distance, although she hasn’t had the success she would have liked at this distance. “It’s not as demanding and gruelling as the marathon distance. Marathon preparation is tough and if something goes wrong in the race, it goes very wrong! I fi nd the half marathon requires a good balance of both speed and endurance, and allows an athlete to be competitive over all the distances from 5000m.”

The highlight of her running career has been representing South Africa at the 2006 Commonwealth Games in Melbourne, Australia. “It was such a memorable experience and my first real taste of international competition.” She has also had her fair share of disappointments; at the Hamburg City Marathon she had fl u but decided to push through. “Just after halfway, I lost my vision and collapsed. That was the fi rst marathon I did not fi nish,” says Tanith, who works part time for adidas.

She describes herself as compassionate, determined and dedicated, and has one big dream: to represent South Africa at the 2012 London Olympics. “It would round off my career and it would be such an incredible experience to participate in an Olympic marathon in London! To say you are an Olympian
and to compete at the highest level possible is something very special to me.”