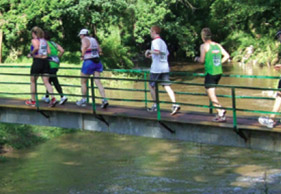 With camera in hand and a faint idea of direction, Modern Athlete Editor Sean Falconer took a scenic run around Irene in the Irene Half Marathon. After 20 or so photo stops, his camera battery was pretty much flat.

For years I have heard about the fantastic Irene Half, with its scenic course through the farmlands and its excellent organisation and atmosphere. Well, now that I have finally run it, let me just say that this  ‘Stellenbosse Boy’ from the Cape may have been searching for a wee bit more oxygen at times, but I’ll
put this race on my ‘to do again’ list for sure.

It was wonderful to see the size of the fi eld. There were just over 1 900 finishers in the 21km and 2 250 in the 10km, plus a whopping 1 300 in the fun run. I wanted to get a good photograph of the starting line-up, so when I spotted a photographer on the roof of the building next to the start line, I decided to climb up as well. And that’s where I was when the race started, taking pics.

When I eventually got going, I found myself running next to 80-year-old Des Robins, one of the Timeless Warriors featured in our October edition cover story. I loved the fact that he was not only chatting to me while we ran, but he was passing much younger runners too. What an inspiration.

As much as I enjoyed the route, I had absolutely no idea where I was most of the time. Being from out of town – and not having a nice big, 1 000-metre high, fl at mountain to give me a convenient reference point – I found the winding, twisty course totally disorienting. Not that it mattered, though, because I was thoroughly enjoying the run, chatting with fellow runners and stopping to take photos about 20 times (which also meant I overtook the same people about 20 times when I got going again. Apologies if anybody got a bit tired of seeing the same red and white vest going past them again).

ELITE FOR A DAY
The funniest thing for me was when I pulled up next to Mike from RAC in the last two kays. He saw my name tag on my club vest and asked if I was related to two other runners named Falconer. The first was a local businessman – no direct relation to me – but then he made my day. He said the other one was also named Sean, a Springbok athlete who used to write a number of articles about running. “Umm, I think that’s me you’re talking about – but I’m defi nitely no Springbok athlete!”.