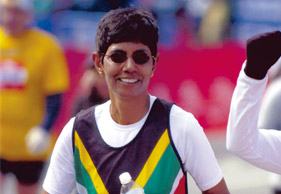 Most of us have watched the Boston, Chicago, New York, London and Berlin marathons on television, taking in the historic sights and great scenery of some of the world’s greatest cities. These five races form the World Marathon Majors Series, which offers a $1 million prize purse to be split equally between the top male and female marathoners in the series. Watching the best marathoners in the world straining every sinew for the prestigious wins and chasing world record times makes for super viewing!

Apart from the appeal the elite frontrunners bring to these events, it is the thousands of backmarkers who make these marathons so spectacular. They come from all walks of life, each one with a different goal and many running for a worthy cause. One such runner is Kay Naicker from Verulam Athletic Club in KwaZulu-Natal.

BEGINNING IN BOSTON
She had only been running for a year when she decided to tackle her first major marathon, the 2005 Boston Marathon. And it all happened by chance. Kay’s daughter, Kubeshini, has lived in the USA since 2004 and Kay was planning to visit her. “One of my club members suggested I run a marathon while I’m there. As soon as I booked my ticket I started training hard,” says Kay, who in the process became good friends with Marie Howarth of Penthouse Travel Sporting Tours, the South African company that offers tour package deals with guaranteed entries for a number of big city marathons. Marie regularly accompanies South African tour groups to these races, and Kay has booked all her marathon tours through Marie.

Kay remembers the Boston Marathon as an amazing experience, though the course was very hilly. Initially she did not consider raising money while running, but as she arrived in Boston her daughter’s mentor and friend, Mark Davidson, passed away from lymphatic cancer. Kay decided to wear a little tag from an American group raising money for cancer. This was the start of her journey to not only run all the big city marathons, but to also raise money for several worthy causes.

LONDON AND KILIMANJARO
The year 2006 was a busy one for Kay. Not only did she take on the London  Marathon, she also tackled Mount Kilimanjaro. “It was a hectic year, but an amazing journey. I enjoyed the race so much. It rained from start to finish, but there were so many South Africans in London. You see a lot of them having braais next to the road. When they saw me in my SA vest they shouted, ‘Go SA!’ ”

While she was preparing for London, Kay decided to climb Mount Kilimanjaro with her friend, Vanessa Phillips. In the process they raised R70 000 for the Verulam Hospice.

NEW YORK, NEW YORK!
Barely back in South Africa, Kay decided to run the 2007 New York Marathon, raising money for the Starfish Foundation, an organisation that helps children who have been orphaned or made vulnerable by HIV/Aids. “I ran the race with Marie and a group of other South Africans. What I enjoy most about these races is the great atmosphere. There is not a single place where you are running alone or where there are no supporters next to the road.”

ON TO BERLIN
Kay’s fourth international marathon was the Berlin Marathon in September 2008. She did not manage to raise money on this trip as she got caught up at work and did not have enough time to plan it. “I will never forget a man I met at this race, though I don’t even know his name! I saw him every 5km up to 35km and every time he shouted, ‘Go SA!’ At the 35km mark I said to him, ‘I want to see you at the end.’ And there he was waiting at the end. I went up to him and gave him a big hug. That is what I like about running; making friends along the way.”

The highlight of Kay’s trip was when she met race winner and marathon world record holder Haile Gebrselassie of Ethiopia at a party after the race. “That was the day he broke the world record for the second time in Berlin. It was amazing and I got to shake his hand. He is such a down-to-earth man.”

CHICAGO CONCLUSION
In October last year on her granddaughter’s birthday, Kay and her daughter ran the Chicago Marathon together. “It was so cold, only 8?C by the time we finished. As I finished the announcer made an announcement that I have just completed the five major marathons. It was a special race for me as my daughter and granddaughter were there; three generations together.”

It’s hard to choose the best race out of all five, says Kay. “They are all different and amazing. In London the crowds were overwhelming, in Boston it was a public holiday and all the school children were out supporting, and in New York there were all the different and beautiful bridges to admire. Standing at the start at each one of these marathons was so exciting!”

A WORTHY CAUSE
Kay, who has been with First National Bank for 34 years, working on projects and development for low-cost housing, has also been part of the FNB employee  volunteers programme, in which employees are encouraged to give of their time and money to support community development projects of their choice. “I am very passionate about charity. It is close to my heart because I come from a poor family where we could not afford things. Now I am much more comfortable and I have to give something back. I love making a difference in the lives of people.”

There is no stopping Kay now. She is planning on running The Great Wall Marathon in China and climbing Mount Everest. She knows she is capable of it because this Durban grandmother believes in never quitting.

Each one of the big five city marathons has a rich history.