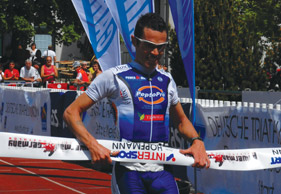 It was his fourth duathlon race ever and all the big sporting names were there. He left his bike, which he had borrowed from a friend, in the transition area with those of the other elite competitors before warming up. But when Jason Spong got back, officials had moved his bike, as they did not think it belonged to an elite athlete. Little did they know that the guy whose bike they had dismissed as non-elite, would not only become the new SA Champion that day, but also a world class duathlete. And now he is taking on Ironman South Africa.

Jason Spong has come a long way from borrowing bikes. His name is synonymous with outstanding sporting performances and podium placings at several gruelling Powerman races around the world, where he regularly takes on the best international athletes.

His commitment to sport started at a young age; as a ten-year-old he was cycling every weekend, dreaming of one day competing in the Tour de France. However, those days Jason always got left way behind by the other boys. He eventually got so bored riding his bike alone that he sang songs to himself while riding right at the back. But how things have changed…

Jason says his sporting career up to now has been an awesome journey filled with incredible experiences, victories and performances, both locally and internationally, but the road to becoming a professional athlete has not always been easy.

SPORTING GENES
Jason was born into a sporting family; his dad, Dennis, was a bodybuilder who finished third at the Mr SA Competition before he took on cycling and raced as a veteran at the World Cycling Championships in Austria. Jason’s dad owned a gym in the south of Johannesburg. “You could say we grew up in a gym. It’s strange that my brother and I never became bodybuilders, but instead ended up being skinny endurance athletes! My parents allowed us to become anything we wanted to. They never pushed us to do anything we did not want to. They have always encouraged us and stood behind us no matter what,” says Jason.

As a 13-year-old, he cycled the Argus Cycle Tour with his cousins and uncle, but lost them along the way and still finished in sub-three hours – not bad for a young boy! But Jason soon began to dislike cycling as he was the smallest in the group and was always left behind. He decided to concentrate on running after competing in a modern biathlon (100m swim and 2km run). Jason was way ahead on the run, but got left behind in the pool. He started winning most cross-country races and in high school, broke all the school records. “I believed running was what I was meant to do. I didn’t want to know anything about bikes or pools.”

LONG AND WINDING ROAD
After school Jason got a scholarship from the University of Arkansas in Little Rock, USA, but never got to race as his coach struggled to overturn a National Collegiate Athletic Association (NCAA) technical ruling that prohibited him from competing. It was a hard and lonely time for Jason as he was far away from his family and had to train alone, hoping things would be resolved. “I remember running track sessions all by myself. I was in good shape and was doing 1 000m in 2:36min/km pace.” Unfortunately the problems with the NCAA were never resolved and Jason returned home, feeling despondent about running.

But his sporting family’s influence was always present and his sister, Samantha, an excellent triathlete, convinced Jason to compete in a team triathlon with her. Shortly afterwards at the 1999 Gauteng Duathlon Champs, he clinched second position. It was only his third ever duathlon – and a month later he won the SA Duathlon Champs  held in Sun City.

“It was a good time but also a bad time. Because of my performance at SAs, everyone thought I was going to win the World Duathlon Champs. I was an amateur and did not know much about compression socks, eating on the plane and altitude sickness. I made many mistakes in my build-up to the race; two weeks before the race I did a 200km ride with a friend. That was stupid, but then I did not know any better.”

He had a disappointing race at the World Champs, but it motivated him to train even harder. “I was so angry with myself. Every night I went to a track close to my aunt’s house and ran 8km as fast as I could,” says Jason, who after the World Champs stayed with an aunt in California for 18 months. “On some nights I ran the 8km in about 24 minutes. I had to clear my mind and say to myself, my performance wasn’t because I was weak but because something was wrong with my body. Everyone had their own opinions about my performance at Worlds, but I had to clear it up in my head for myself.”

While living in California Jason worked in a sport shop, competing in as many duathlons as he could. He also started swimming and participated in some triathlons. He came back to SA for a while before returning to America a third time at the end of 2002. But after battling for eight months to get a visa, Jason found himself back in his home country.

The decision to specialise in duathlons came after Jason’s father and sister qualified in their respective age groups for the World Duathlon Champs. His brother, Rory, was racing in Switzerland and Jason decided to join them all. He got a wild card entry as an age grouper and ended up winning his age group. “From there my focus was purely on duathlons. I risked everything for it. Every penny I had I put into my sport.”

POWERMAN
Jason began to excel at the Powerman races, winning his first ever Powerman race in 2005 in Malaysia, breaking the course record by two minutes. Unfortunately, he battled to find sponsors back home. Things were no better in America, where he worked in a multi-sport store in Richmond, Virginia in 2007. “It’s unfortunate that duathlons are not seen in the same light as triathlons. It’s seen as a secondary sport to triathlons.” So in 2007 Jason returned home.

His most memorable race came in 2008 when he won Powerman Malaysia for the second time. “When I crossed the finish line the race director was in tears because she knew my story and the uphills I had fought. That day I had won and beat the best in the world. My mom was there, standing right at the finish line. It was special and emotional for me because my family has gone through this whole journey with me.”

Recently Jason, who prefers specialising in long distance duathlons, competed in a shorter distance duathlon series in South Africa, the 2009 Momentum Health Teavigo National Duathlon Series, fi nishing third. He continued to excel at the Powerman races. Last year he finished third at Powerman Malaysia but an iron deficiency saw him dropping out of Powerman Austria. Unfortunately, he did not recover fast enough and this led to a disappointing 15th position at the 2009 Powerman World Championships in Zofingen, Switzerland.

THE JOURNEY TO IRONMAN
Duathlons will always hold a special place in Jason’s heart and he would like to compete in many more, but the reality is that triathlons attract more sponsors and offer better prize money. “I am 33 years old and I don’t want to scramble around for race entry fees. I am living my dream and I have had good results, but I need to earn a salary to fi t the dream. There are many Ironman races on the calendar and they all offer good prize money.”

Jason has always dreamt of competing at Ironman Hawaii. Doing well at Ironman South Africa on 25 April will hopefully be the first step in realising that dream. He finished 19th at Ironman SA in 2005, but says that his placing was not an indication of his ability, as a bike crash only weeks before the race kept him from training.

THE COACH
Last year Jason met John Hamlet, one of the country’s top running coaches, and the two of them immediately clicked. “I have been with a lot of coaches but I have been mainly self-coached. After Zofingen I felt I needed somebody. When John and I started chatting he said the things I wanted to hear. There is hard training and then there is hard training with passion. John oozes this passion.”

Former top triathlete Dominique Donner also helps Jason with his swimming. “I am in a fortunate position to be coached by them. John overlooks my whole training programme. He knows everything about ultra-distance training and though his speciality lies with running, the principles for ultra-distance cycling and swimming are the same.”

Jason trains an average of four hours a day, doing specific workouts that build power, speed, endurance and all other facets of his racing ability. Mentally the hardest part of his training is swimming because he has never really had a great love for it. Physically he finds the three- to four-hour training rides, directly followed by two-hour runs challenging, but believes it is all worth it on his path to Ironman. “I believe I can finish in the top five.”

SPONSORSHIP
A friend asked Jason, who has a PB of 30:50 for 10km and 68:03 for 21.1km, what the difference was between him and the best in the world. “Only support,” Jason answered. “I know I have the mental strength, the ability and the experience. I don’t need a special bike or special  running shoes. I have what it takes. But I just need support. If I have support I know I can make it.” For someone who has achieved so much and successfully represented his country at several international races, it’s hard to believe that Jason battles to find more sponsorship. He is currently sponsored by Nike, PeptoPro? and S2R Projects.

It’s these hard financial times that have made Jason sometimes wonder if it is all worth it. But every time his love for the sport outweighs the sacrifices. “I believe with anything you do in life, you can never reach your full potential unless you have  passion for what you do. Disappointments at races just made me more determined. Your bad races tell you more about yourself than your good races. Sometimes you have a great day but you really have to fight for your victories. When you lose, it takes a real athlete to come back and be strong.”

DREAMS
Jason wants to remain true to his first love, duathlons. “I want to keep to my roots and compete in as many Powerman Zofingen and Malaysia races as possible.” But for  now, his heart is set on one thing only. “Ironman South Africa is going to become a special race for me because it is home. It is a place where all my friends, parents and family can stand on the side and experience the race with me.” So what happens after that? “As far as I am concerned there is only one Ironman and that is Ironman Hawaii. You have not walked the walk until you have done Hawaii!”

He will always compete in sport but one day, when the competitive aspect is no longer there, Jason would like to own an airbrushing business, airbrushing bicycles, helmets and motorbikes. In between training now, he spends time painting and designing.

Jason has come a long way and hopes that Ironman SA will be the start of an even greater journey. One thing is for sure, no race official will ever again remove Jason Spong’s bike from any transition area!