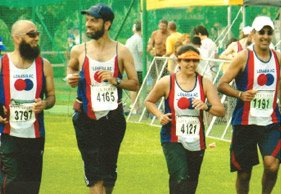 It might not be the most visible running club at road races, and it certainly doesn’t have the most members, but each and every one of this small close-knit club’s members is passionate about promoting the love of running in their hometown community, south of Johannesburg.

The idea of starting a club in Lenasia began with five friends debating the issue on their journeys to different road races in and around Gauteng. Siva Veeran and his four friends, all from different clubs, longed for a club in their hometown they could call their very own. Their dream became a reality in 1988 when Lenasia Athletic Club (LAC) was formally established.

Initially, it was such a small club that Siva had to register all his family members in order to meet the amount of members required for a club to be recognised by the former Transvaal Road Runners’ Association (TRRA). Club colours were chosen as white with blue and red stripes, but the TRRA rejected the design as not being visible enough. Two circles (blue and red) on the front of the vest were then accepted and today this design serves as the proud logo of LAC.

The club’s goal back then was simple, to offer runners an opportunity to be part of a local running club. Today, nearly 21 years later, the club’s goal is still very much the same. There is only one slight difference: over the years a strong focus on the development of running, especially among the younger members of the community, has developed.

GIVING BACK
LAC has about 130 members. “We are not known for hosting big races and we don’t have a lot of members, but we feel strongly about our community and about getting youngsters involved in the sport of running,” says Club Chairman, Nadisha Khan, better known as Nadi amongst friends and fellow runners.

Up to four years ago, LAC proudly hosted a 10km/21.1km race in Lenasia, but a lack of sponsorship forced the club to cancel the race. This did not demoralise members and they pursued their passion for organising development races, which are mostly run on a shoestring budget and require determination and hard work to put together. “We try to focus especially on the development of school children, but we also try to get the adult community involved,” says Nadi.

LAC’s biggest development race is the annual Valentine’s Night Race, which is held in February and starts at the Trade Route Mall in Lenasia. The turnout is anything between 300 and 400 runners. Entry for school children is free and older participants only pay R5. There is no prize money, but the organisers make sure each and every participant is sent home with a medal.

Once a month, from July to November, more development races are held in Mayfair, close to Lenasia. “We have experienced that a lot of adult community members support these races. They are hesitant to participate in the usual big club road races, but they feel more comfortable and willing to try their hand
at running in a more relaxed atmosphere. And even if it’s just a water bottle, we ensure that everybody gets something,” says Nadi.

CHANGING A GENERATION
Nadi is the first to admit the Indian way of life is not conducive to health and fi tness. “The Indian population has a very high incidence of diabetes and heart disease because of their lifestyle. We cook with a lot of butter, we eat a lot of meat and the majority of Indian people generally just don’t exercise and are not health conscious.”

Less than 1% of Lenasia’s 200 000 residents walk or run. “The younger generation is slowly growing up to be more active and healthy, but the older generation is still not very health conscious.”

A couple of years ago, a gym opened in Lenasia and helped to establish a gym culture, mainly among the younger community members. Walks such as the annual Ghandi Walk and the Spring Walk usually attract the adult community members.

LAC helps the different community organisations with the marshalling of these events. “More people are starting to live active lives and many are going to the gym, but very few are running. A lot of residents are still saying to me, ‘Why must I run like Nadi when I can walk like Ghandi?’”

Running was brought to the foreground in Lenasia in 2009 when their hometown girl, Kashmira Parbhoo, finished as the tenth lady in the 2009 Comrades Marathon. “Kashmira’s achievement was a huge boost for running in Lenasia. Residents started realising the benefi ts of an active lifestyle and saw what could happen if you believe in yourself. Kash’s performance also forced the running community to recognise LAC and take notice of us!”

SOCIAL SCENE
LAC utilises the facilities of a sport centre in Lenasia when they hold club functions. A pre-Comrades get-together is organised every year while the club’s annual gala awards evening is the highlight of their social calendar. LAC encourages its members to recruit family and friends, even if it is just to join in on a weekend run. “I always encourage our runners to be social and friendly on the road, because they carry the club’s image,” says Nadi.

TRAINING
Because the club is relatively small, nearly all its members train together in the mornings. Some meet at the gym while others get together at different garages. Each group has a different training pace and some of the more serious groups mix their distance running with quality work such as hills. LAC does not host a weekly time trial, so members try to incorporate some speed work into their morning training runs.

“Lenasia is very small. You won’t even be able to run 15km around it. Therefore, it is quite convenient for runners who choose to run shorter routes to just drop off anytime and find their way home,” says Nadi.

And though the club is small, nearly half of its members enter Comrades each year. “The Comrades culture in this country is just so big that even in our small club nearly everyone enters.” More than 60 members have entered for Comrades 2010, says Nadi, who has completed seven Comrades and a few
Iron Man races.

Last year, 45 members entered the 2009 Comrades. While two did not qualify, one did not start and eight did not finish, some achieved remarkable performances, such as Naresh Nana who completed his 21st race, Pete Naidoo who ran his 19th and Adam Suliman who walked away with his 17th medal.
Those members who did not finish the 2009 race are determined to tackle the 2010 race, including
Sullie Saloojee. “I know I was lazy, but I know I have the potential to complete the race. My lack
of training has caused me to disappoint not only myself, but most importantly my family and friends. Running allows me to be myself, it gives me time to refl ect and connect with the Divine. I will be back.”

LAC has a strong walking group that trains under the guidance of Valla Moodley. Many of the walkers participate in the annual 50km Verulam Big Walk in KwaZulu-Natal. Quite a few LAC members are also eager cyclists. “Every year we encourage our members to try something else other than just running. I believe that you have to do something every year that challenges your boundaries and comfort zones, and that excites you.”

RAISING FUNDS
The fi ght against cancer is a subject close to many members’ hearts because many of them have experienced the pain of losing family members or friends to this disease. Each year, LAC raises money for CANSA as part of their build-up to Comrades. They have donated more than R70 000 to CANSA over the years. Most recently, seven runners raised a further R17 000 by participating in the New York City Marathon. Nadi Khan, Bhupenda Purbhoo, Hasmukh Patel, Ajit Vallabh, Jeff Sukha, Pradeep Gowan and Nanda Dalpat, all experienced runners, ran their very first international marathon in  November in the Big Apple. Apart from having the time of their lives, they did it all for a very worthy cause they truly believe in.

“We had a fabulous time. The runners from other countries were very soccer World Cup orientated when they saw us. They all shouted that they would see us in 2010,” says Nadi, who ran in a shirt depicting the South African flag.

Though it is a small club, LAC is vibrant and its members believe in what they do. Most importantly, they have a passion for their community – and that is what counts, according to Nadi.

One thought on “Lenasia Athletic Club”