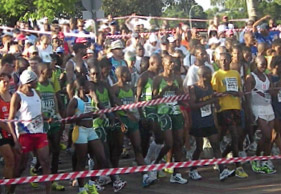 The Varsity Kudus 15km race in northern Johannesburg is usually the first race of the New Year and for many, a wake-up call after lazy, festive days of over-indulgence and very little training. Sherina Desai, a runner from Lenasia Athletic Club, tells of her January awakening.

Varsity Kudus always sets off the alarm bells for me. The race is at a time of the year when I am unfit and lack confidence in my own running ability. However, each year the runner in me takes over and dictates that even if I walk, I will go to the race and complete the course.

This year was no different. The night before the race my preparations were in place: running vest, shorts, pins and Vaseline. Next morning: rise earlier, drive through. Voila! Parking was a breeze. However, something was missing. The start and entry points had been changed. A stressful jog from the Empire
Road end to the Yale Street entrance, with a few silent curses, started the day.

However, I was pleasantly surprised by how well-manned the entry tables were. There were no long queues (I have to admit this change seemed to have been well thought out). A bit calmer, I joined the masses of runners. There was excitement, joy and hugs all around – the running family was in bonding mode and each face held expectations of a new running year ahead.

The first kilometre was a steady decline which provided the perfect warm-up. This kilometre was within the boundaries of the campus, unlike previous years. After the fi rst 2km, we were faced with the constant inclines which are characteristic of the race. This was our wake-up call. Welcome to 2010!

Even though the route was tough, seeing familiar faces made up for the strain we all felt, and I realised how fortunate I am.

These runners from different clubs only known to me by their club colours, are my motivation and inspiration. They care about me, as I care about them. They encourage me through patches of difficulty without expectation.

The watering points were manned very well. The marshals did a splendid job, especially at intersections where motorists clearly displayed irritation.

The extra flab from the festive season began to weigh me down and the race took its toll in the last few kilometres. I must add that the last kilometre finished me! Once again I cursed the race organisers for wanting to kill me so early in the season.

The finish was well-organised, with very little room for congestion or confusion. On completing the race, all the aches and pains were forgotten. It’s a race I will do again and again; one that is well-organised and a course par excellence. Well done to the organisers!