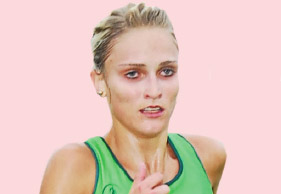 She has won the Dis-Chem Half Marathon four times before, but at this year’s race she did not think she stood a chance of winning, as Ren? Kalmer, one of her biggest rivals, was amongst the elite women lining up. “I did not have a race plan and from the start just ran. At the 12km mark Ren? pulled out because of an injury. I ran alone all the way, but constantly thought the other girls were going to catch me any minute. Only when I crossed the finish line I realised how far ahead I was,” says Irvette.

She finished in 1:18:46 despite running the race with blisters, which she started becoming aware of from the 9km mark. “I think my racing shoes were too light for a half marathon. I am just happy I won and managed to run a sub-80min half marathon.”

Irvette is no stranger to winning races and competing at a high level. As a junior she represented South Africa at the World Cross-Country Champs. In 2003, at the age of 15, she finished in 18th position and the following year, she crossed the line in 16th position. At the end of her grade 11 year she was involved in a scooter accident and could barely walk for two months. But three months after the accident, Irvette was back at the World Champs, finishing in 26th position.

She has excelled at track events, winning the 2009 SA Track Champs over 10 000m. But her passion lies with road running. “I prefer running 10km and half marathon road races. Track can become very boring. The routes in road running are always different and challenging.”

She has never raced further than 32km, but is hoping to tackle the marathon distance soon. “Marathons are challenging and if I work hard I can excel at it. I am hoping to run my fi rst marathon at the SA Marathon Champs later this year.”

She admits to suffering from countless injuries but luckily, the last couple of months have been good to her and she feels fit and healthy.

Irvette is part of a group of elite athletes who train under the watchful eye of Gerrie Coetzee. He coaches athletes such as Juan van Deventer, Ren? Kalmer and Maxine Heine-Wacker. “We are a competitive group of girls!” says Irvette, who works at her mom’s nursery and runs an average of 150km a week.

Running is in the family; her godmother is well-known competitive athlete and former Comrades winner Francis van Blerk. “Sometimes we run together. Luckily I am still beating her!”

Irvette’s biggest dream is to compete in the 2012 Olympic marathon. “I enjoy pushing myself to the limit. Running is so much part of my life. I don’t think I would ever be able to stop. It’s like an addiction.”