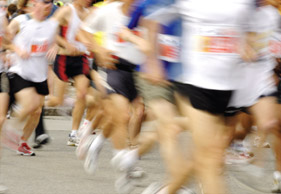 Should you wear racing shoes, or racing flats as they’re known, when you want to go for faster times in races? Here are some guidelines to help you decide.

You’re lined up at a race when you notice that one of your shoelaces has come untied, so you kneel to retie the bow. While you’re down there, you look at the other running shoes around you and notice that some runners are wearing sleek, lightweight racing shoes, whereas you’re in the bigger, heavier running shoes that you usually train in.

Now you start wondering if you should get a pair of racing shoes as well, because they look so aerodynamic, so built for racing and faster times, but you’re not sure if they will really make that much difference. After all, you’re not exactly an elite runner… Here’s what you should know.

Race faster: Research in the USA has shown that most runners go about one-second-perkay faster for every 30 grams that they shave off their running shoes. So if you go from a 320-gram training shoe to a 200-gram racing flat, that’s four seconds per kay, which means 40 seconds saved in a 10km race, or nearly five minutes in a marathon. Granted, it isn’t that much, but for some runners that could mean finally setting that elusive new PB.

Feel faster: When you line up to go after a fast time, you want to feel ready to race. You eat more carefully, make sure you have everything you need, then warm up extra specially, so go the whole hog and add racing shoes as well, even if it just makes you feel faster.

Less cushioning: The midsoles of racing flats are thinner than training shoes, so they provide about 20% less cushioning. If you are a bigger, heavier runner that needs the extra cushioning, rather stick with your trainers.

Less support and stability: The reason racing flats are so light is that they are relatively simple shoes, not offering much in terms of stability, support or motion-control features. If you need these, you probably shouldn’t wear racing shoes.

Lightweights versus flats: Lightweight trainers are designed for fast training and long-distance racing, making them the perfect compromise for most racing distances and runners. They usually weigh about 250 grams, which is midway between a training shoe and a racing flat, so still provide good cushioning and support.

When in pain: Conventional wisdom is that you shouldn’t race when your muscles are tired and sore, but many of us line up for races a bit sore anyway. If so, more cushioned training shoes are better as they minimise further muscle damage.

Go short in flats: A good suggestion is to wear racing shoes for 10km races, then switch to lightweight trainers or normal training shoes for longer races. The theory is that you won’t do that much damage to your muscles in the shorter races if you do need more cushioning.