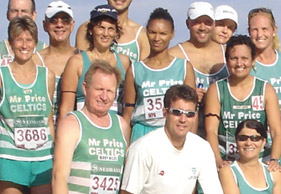 Just over 100 years ago, in August 1906, a group of young runners in Cape Town met to discuss forming a new athletic club. As many of them had Irish roots, the name Celtic Harriers and club colours of white and green hoops were proposed and accepted. Today the Celtic colours rank amongst the best-known club colours in the country, and the club boasts a rich history of running achievement.

In the early days the club’s focus was very much on track and fi eld, with cross-country second on the list and road running trailing in a distant third, says living Celtics legend, Harold Berman – best known as the voice of road running in the Western Cape thanks to his work as a race announcer. He says he’s seen many changes in the sport since he joined Celtics in 1961 as a 16-year-old sprinter with a best of 10.5 seconds for 100 yards.

“I loved athletics at school, but we had limited opportunity for participation as there wasn’t much in terms of interschools back then, so I felt it was time to join a club,” says Harold. “The focus then was on the track, but that changed in the mid-1970s when running exploded during the Running Boom. But there was no one to run things or to announce things – our Club President Charlie Savage would just shout the line-up and then we would start the race. Later I got hold of a loudhailer, and that’s how my announcing started.”

Today the club has some 450 members, but in former years had up to 1 200 members and was the largest club in the Cape. The club caters for all runners, from beginners to the elite, and recently established a trail running group, a walking group as well as a multisport section to cater for triathletes and duathletes.

IN THE HOT SEAT
Current Celtics Chairman Roger McCallum has been a member of the club for six years. He joined Celtics because he lived just down the road from the clubhouse and heard about the good spirit in the club. “I ran six Comrades for six different clubs, but I fi nally decided it was time to settle down, so I joined Celtics. I did my fi rst Comrades while I was still at varsity, but I gave up running for 17 years, took up smoking and got as big as a house, so I decided to get back in shape, joined Celtics, and this year I’ll be running my tenth Comrades.”

This is Roger’s first year on the Celtics committee and he says that he was thrown in at the deep end when elected, but is quick to add that he has had plenty of support. “There are a lot of experienced runners and administrators in this club who you can call on to help or offer advice. I must say, though, it has been a real eye-opener seeing how many different tasks there are to running a club and organising races, and how many people are needed to help.”

Vice-Chairman Ivan Fynn has a similar story, having been with the club five years and now serving on
the committee for the first time. “I used to run as teenager, then didn’t run for some 25 years, but due to the stress of my work in the media world, I decided to get some exercise. A friend and I tried to walk around the Rondebosch Common and we saw all these Celtics guys running around the Common, so decided to join their time trial. Later we decided to join the club for the structured training and advice the
experienced runners could give us.”

“Then, like Roger, I heard the call for new faces on the committee. The beauty of this club is that the new committee has been consistently helped by former committee members and administrators, so the ‘institutional memory’ lives on while we’re also bringing in fresh ideas.”

RUNNING HOME
The club did not have an offi cial home prior to the 70s. In the early years the runners would meet at the Long Street Swimming Baths, where they could take a refreshing dip after a hard training session. Later the meeting place moved to St Joseph’s in Mowbray. Then in 1970, led by Stuart Banner, Celtics amalgamated with Villagers Rugby Club, which was based at Brookside in Landsdowne Road.

Believe it or not, the rationale behind this was that Villagers could not qualify for a liquor licence, given that their membership was limited to one half of the year, during the rugby season. Therefore, by inviting Celtics to share their club facilities, they ensured a year-round membership and thus qualifi ed for a liquor licence for their bar!

The bonus for both clubs went far beyond bar facilities, though. Celtics finally had their own clubhouse and picked up a number of new members from the rugby club who were looking for extra fitness training ahead of the rugby season. As it turned out, some soon found they had far more talent for running than rugger, including Marcello Fiasconaro, who went on to set a world record over 800m.

CLUB RUNS
Celtics presents a number of weekly training runs. Club runs take place on Tuesdays and Thursdays, starting at 5:45pm or 6pm (depending on the season) from the clubhouse. The runs are between 8km and 15km long, with up to nine different slow, medium and fast groups led by experienced pacers that call the route for the day. The club recently added a walking group with two pace groups of either 8min/km or 10min/km, which cover between 7km and 9km per session.

The Celtics time trial is run on Wednesday evenings, either at 5:45pm or 6pm. It circles the Rondebosch Common for a distance of 2.5km, so two laps gives you a standard 5km route. The start point is at the Big Rock on the corner of Park and Sawkins Roads. As an extra incentive to run the time trial, Celtics’
club sponsor PUMA provides prizes for a monthly shoe draw.

The club also has a trail running group, which meets every Thursday at 6pm somewhere on the slopes of Table Mountain and its accompanying peaks. Slow, medium and fast pace groups are provided, led by experienced trail runners who know the mountain well, and the groups always stay together so that nobody gets lost on the mountain. Another monthly draw for a pair of PUMA shoes adds extra incentive to join this group.

CELTICS RACES
Officially, Celtics has three races on the annual calendar, but in reality only organises two of them, since its flagship race, the Old Mutual Two Oceans Marathon (56km) & Half Marathon, along with the
accompanying Marafun fun runs, is now run as a separate Section 21 company, although still with much input from the Celtics members.

“The event was organised by the club for many years, but this changed when more and more  international runners began to enter and Athletics South Africa and Western Province Athletics said the race should be organised under the auspices of the national body,” says Harold.

The Two Oceans was founded in 1970 as a long training run for Cape Town runners preparing for the Comrades. While that first race had just 26 starters, the ultra has grown into one of South Africa’s favourite races, now run on Easter Weekend, along a route that passes both sides of the Cape Peninsula and thus offers wonderful sea views on both sides, hence the race name. Oceans will take place on 3 April this year, and the popularity of the event has forced the organisers to cap entries at 10 000 and 11 000 for the ultra and half respectively.

Preceding Oceans each year is the BDO Peninsula Marathon and Half Marathon, which will take place on 21 February this year. It was fi rst run in 1964 and traditionally run from Green Point to Simon’s Town, offering a fl at course that promised good times – if the south-easter didn’t provide a stiff  headwind. The half started in Bergvliet, near the halfway mark of the marathon route. Due to construction and planning for the Soccer World Cup, the start cannot take place in Green Point at the moment, so the route has temporarily moved down to the Simon’s Town-Fish Hoek-Kommetjie area, but is set to return to its traditional route in the near future.

The Don Lock 8km Memorial Race is the oldest of the Celtics races, first run in 1960 as a five-mile race in memory of Celtics member Don Lock, who was killed in an accident. Run between the Rondebosch Common and the clubhouse at Brookside, the race now attracts many young runners through the Move For Your Health initiative run by the Sports Science Institute of South Africa in conjunction with the World Health Organisation, along with the My School initiative run in conjunction with Woolworths
and the City of Cape Town.

SOCIAL SCENE
Like all good clubs, Celtics has a vibrant social scene. The yearend function with awards ceremony, plus welcoming of new members, takes place around January/February to kick off the year. That is followed by the annual Two Oceans and Comrades functions, to send the club’s ultra-marathoners off in style. Later in the year come the Hat Party, Quiz Evening and AGM, with other events sprinkled in as well.
The club also takes its tent to the bigger races, including all Western Province or Club Challenge league races, and the full series of cross-country league events. Drinks and snacks are provided for members at these races.