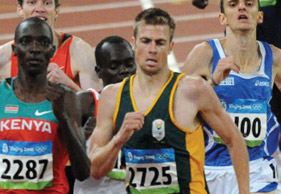 He finished sixth in the 1500m at the 2008 Olympics and many thought he would bring home a medal from the 2009 World Champs, but those dreams were shattered when an injury forced Juan van Deventer to lay off running for a year. Now he is back on track, hoping to bring home a medal when he competes at the IAAF World Indoor Championships next month.

His comeback at the end of last year was spectacular. The tall 26-year-old posted a third consecutive victory at the RAC Tough One 32km in Johannesburg, running uncontested for most of the route that is known for its many unforgiving hills, and clocking his fastest time of 1:43:33. He followed this up with another win at the recent Dis-Chem Half Marathon in Bedfordview, finishing in 1:06:41. Not bad for an athlete who specialises in middle distance track events.

Juan believes his performances at the Tough One and Dis-Chem are a good indication of his renewed strength and fitness for the upcoming World Indoor Champs in Doha, Qatar from 12 to 14 March, as well as the Commonwealth Games in New Delhi, India in October. He is currently competing in the European international indoor track circuit, with the last race to be held on 23 February. “I am using the indoor circuit as a build-up to the World Indoor Champs, where I am hoping to perform well.”

HIGHS AND LOWS
Juan has always preferred individual sport and has been running for as long as he can remember. “Since I’ve been young, sport has been everything. It has been the only thing I ever wanted to do and the only thing I have been sure of wanting to do.”

Over the years he has continued to impress against the world’s best, but his greatest achievements came in 2008. He reached the 1500m Olympic final and, in the same year, finished third at the African Champs in Ethiopia. One of his greatest moments came in July 2008 when he broke the longstanding South African 3000m record (7:44.00) of track legend Johan Fourie, set in 1985. Juan smashed it by finishing in 7:41.06.

“My manager phoned me just before and said he got me into the race. I knew I had a chance to break the record because I ran a good 1500m (3:35.20) in Belgium a couple of days before.” But then in 2009 Juan was diagnosed with a stress fracture. “I ran a 1500m event in New York and finished second, but afterwards I could barely walk. I was out for a year, missing the international track season as well as the World Champs. It was so disappointing.”

TRAINING TIME
Juan’s coach, Gerrie Coetzee, who also coaches top SA female track and road athlete Ren? Kalmer, is right behind his athlete’s road running ‘excursions’. “Gerrie believes one can excel in shorter and longer distances. I won’t run 32km in the middle of the track season, but towards the end of last year it was a good test. Gerrie wants me to try a marathon later this year.”

For Juan road running is sometimes more enjoyable than track running. “A track event is over within minutes. You have either won or not. But when you are running a road race and there is 5km left with your closest competitor two minutes behind, you have time to enjoy the last few kilometres. Also, the crowds next to the road give me goosebumps.”

Juan runs about 160km weekly, training seven days a week and running 8km to 15km every morning. “I run those sessions fast, 3:20min/km and faster. Gerrie calls it ideal conditioning.” On Tuesdays and Thursdays he focuses on strength in the gym and on Thursdays, it’s track endurance. Saturdays are reserved for speed work and Sundays for 24km to 40km progressive runs; starting at a 3:45min/km pace and finishing at 3:15min/km.

FUTURE OF TRACK
“A while ago I looked at a picture of Johan Fourie running the mile. Crowds packed the stadium. These days you are lucky to get 100 people at a local meeting,” says Juan, who has a BCom Sports Management degree as well as a diploma and certificate in sports administration.

“It is a fact that bad management and organisation have been part of athletics. Now is the time for someone to step in and put athletics back in place. Track running is an attractive sport. Internationally the stadiums are packed.”

LONELY ROAD
He loves travelling but the loneliness of it all sometimes gets to Juan. “Many times I am the only South African at a race. There is no coach and one has to train alone; that can be tough. I always try to keep in contact with someone back home to keep sane.”

Juan is good friends with fellow track star Johan Cronj?, whom he also describes as his greatest competitor. “We have so much in common. We have been swapping first and second position for a very long time.”

His parents, Frans and Sandy, and sister Cherie, are very supportive. “They try to go to every race. My parents will definitely be right there next to the track at World Indoors in March.”

DREAMING BIG
Juan says his big dream is to win gold at the 2012 Olympics. “There is no use in just saying I want to qualify for the Olympics or I want to make the final. I have done that. Now I want to win!”

He describes his 2008 Olympic performance as an amazing experience, but also disappointing, finishing sixth in 3:34.77. “Standing on the starting line amongst the top 12 athletes in the world was the greatest moment up to now. But I wasn’t happy with my performance. It felt as if I had a lot more left and as if I didn’t believe enough in myself. After the race I realised I could have had a medal.

I learnt a lot from that race.” Mental preparation is an important factor in Juan’s build-up to the 2012 Olympics. “I know how to train hard and how to live a disciplined life.
Now I just need to believe that I can be the best. That is the only way to run. One has to have a winning attitude.”

Racing is hard, but Juan says he is almost addicted to the feeling he gets after a race. “It is great walking off the line knowing that you have run as hard as you can and that you have achieved what you wanted to.”

This year will definitely see him running a marathon, and even the Comrades Marathon is on the cards in future years. “I would love to win an up and down Comrades – and set the record on both.” But for now his focus is on bringing a medal home from the World Champs. “I also know the SA mile and 1500m records are within my reach and it has to happen this year.”