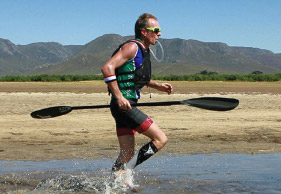 Made up of seven sporting disciplines, the Totalsports Challenge is one of the most comprehensive multi-event challenges in the country. Entrants can compete individually or in teams of two, three or seven. Either way, it is a mentally and physically tough challenge. Jacques van Rensburg, who placed third individual overall and first in his age category, shares his experience with Modern Athlete.

The Totalsports Challenge takes place annually in January and is made up of the following seven disciplines (in order): 12km surfski, 1.5km sea swim, 50km road bike (from Gordon’s Bay to Kleinmond), 13km road run, 13km K1 canoe, 25km mountain bike and finally, a 9km beach run. Athletes who are not yet ready for the full challenge can take part in the less daunting, but still challenging Totalsports Terra Firma Challenge. This race starts off with a 50km road bike (from Gordon’s Bay to Kleinmond), followed by a 13km road run, a 25km mountain bike and a 9km beach run.

I have taken part in the Totalsports Challenge four times, but always as part of a team. In 2009 my partner and I won the two-member men’s team category. Being 2010, and with all the hype around it, I thought why not make this the year to do the race on my own?

2010 CHALLENGE
It feels like I have been running forever. I started off as a junior and later won the SA Cross-Country Champs as well as the Cape Odyssey with my brother, Mauritz van Rensburg. I guess this year I just felt ready for my introduction into multisport racing.

When you train for a seven-discipline event, come race day you just never feel comfortable that you have done enough. This year there were more than 750 competitors, of which 50 were individual athletes. One name stood clear above the rest, Dan ‘The Man’ Hugo, who has won the race several
times before.

Every year the event organisers put together a great race that can be enjoyed by both serious and social athletes. Safety is always a number one priority, so much so that this year the first two disciplines (12km surfski and 1.5km sea swim) had to be cancelled due to the south-easter.

TOUGH PARTS
For me the toughest part of the race was the mountain bike discipline, as well as the gruelling last 2km of the beach run, which was on very soft sand. Towards the end of the run my legs were so fi nished that I was afraid if the waves came up just a little too high, I might have been washed into the sea!

I finished in 5:33:58, resulting in a third place position in the individual men’s category and a first place position in the master’s (40 and over) category. I love taking on events that challenge me! I love looking around while competing and admiring the beauty of nature all around me. It’s not just about winning. It’s also about how you get to the finish line and the lasting memories you can enjoy while relaxing in your big
chair in the sun after the race!

My next challenge? Ironman Port Elizabeth in April! See you there.

Special thanks to my sponsors and family for their love and support: Elana, Christopher, Ene and my father, whom we like to call  ‘Bielie van die Bos!’