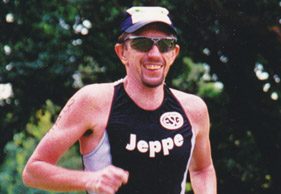 This January Derick Marcisz of Jeppe Quondam Athletics Club in Johannesburg celebrated 40 incredible years of being a runner, during which he has raced against some of South Africa’s best runners, represented his country and covered more than 100 000km.

In January of 1970, having just turned 15, I started my standard nine year at in the south of Jo’burg. A few days after school started, the vice-principal called all the standard nines to a meeting and told us that we should get more involved in school activities and do a sport as well as another club activity in preparation for being the following year’s matrics. Now I lacked the skills to play ball sports, so I joined the athletics team and tried the 800m and 1500m events. No spectacular debut, but I enjoyed the running and the competition, so after the track season I started to train for the winter cross-country season. My fitness improved and suddenly I was the second-fastest runner on the team.

I continued to run on my own and then in October 1970, a friend suggested I join him at Johannesburg Harriers Athletic Club (JHAC). By January 1971 I had significantly improved my track times and was unbeaten over 1500m at the interschool events. Cross-country followed and I ran for both the school and the club. I was selected to represent at the SA under-17 Cross-Country Champs in Stellenbosch, where I finished 12th and completely surprised my class teacher. She said that I was the last person in the school she expected to succeed at sport!

1972 was spent doing national service in the army, but as an athlete I had an easy time, running track and cross-country for the Defence Force Pretoria Club each weekend. I did not make much athletic progress that year, although I did do my first 21km and 42km – the marathon was without any specific training and I clocked 3:20.

BREAKTHROUGH YEAR
In 1973 I started my working life in Nedbank’s International Division. I also decided that I wanted to run the Comrades that year, so I began to do daily longer runs and ran the Korkie 56km in 4:05. This built a good fitness base, so when the cross-country season started and I added speed work, my performances improved dramatically. I did not do the Comrades in the end, concentrating instead on cross-country, and winning all the provincial under-19 titles and the SA Champs in . I also ran the Golden Reef Marathon in 2:40 as a training run, and won a 25km race as well as the race.

It was also very exciting to be part of the start of ’multi-racial athletics‘ in 1975, when we first ran against athletes of colour. I finished third in 2:25 at the SA Marathon Champs in Stellenbosch behind Gabashane Rakabela, who also became the first black athlete to win Two Oceans.

The next year all events were multi-racial and I raced Rakabela in the Callies 25km night race, where I was defending champ. We ran neck-and-neck through the streets of Germiston and were still together as we got onto the track, where he managed to outsprint me for the win. It was a privilege being part of that era.

MR CONSISTENCY
My training was based on coach, Arthur Lydiard’s, principles of  consistent training throughout the year, but building up to peak performances. During peak training we ran 145km to 160km a week, with the usual long run and speed work sessions. We also did a lot of cross-country racing in the winter. I have used these same principles for training for the last 40 years, and still believe that consistency is the key to performance at any age and ability.

I loved the hills! One of my favourite marathons was the Jackie Gibson, which is renowned for its hills. I was the first runner to break 2:30 for the course when I won in 2:27 in 1976, and I successfully defended my title the next year against Alan Robb, winning with a new record of 2:26. The 1976 race was special in that I had been on holiday touring for two months and returned out of shape and with some extra kilo’s. The press decided I did not have a chance of defending my title, so beating  Alan and setting a new record was most satisfying!

COMRADES
I ran my first Comrades in 1975. My club had decided to send a team to the to Brighton 52-mile race in the , so I started training for longer distances that January. I managed my fi rst sub-2:30 at the Southern Transvaal Marathon Champs in March, finishing third in 2:28:30, but then injury slowed my training somewhat. I still managed to fi nish the up Comrades of 1975 in 52nd position, in a time of 6:50 for 91km.

Later that year, six of us went to on what was my first overseas trip (which ignited my love for travelling). to itself was a major letdown compared to Comrades, in terms of atmosphere. I think we were no more than 200 runners and after a few miles it was like a club training run, with the field spread and no support at all along the way. An incident at the start that I will never forget was when my club mate Bernie Sham removed his tracksuit pants and found that he had forgotten his running shorts! Thankfully a runner from Springs Striders had a spare pair.

I never really enjoyed the Comrades and have only done four. In 1981 I trained with Bruce Fordyce (he went on to win his first), so I was really fit and managed to run 2:56 through halfway, but then went too hard for the next 15km. At 64km I was on 4min/km pace, heading for a sub-6:00 and lying ninth! Then I hit the wall big time and dropped back to finish about 90th in 6:49.

GETTING WHEELS
By the end of 1985, I had to take a break from running due to Achilles tendon problems. It was the start of the cycle craze, so I bought a bike too. One of ’s top cyclists lived in the same street and so I started riding with the top cyclists. Whilst I never had the power to sprint or break away in races, my slight build made me a good climber, so I was reasonably competitive in races, with a best finish of 17th in the 1988 Argus Cycle race.

I also started to compete in duathlons, which had just started as the winter alternative to triathlons. My newfound cycling skills allowed me to be competitive, but during this time I did sport mostly for enjoyment, having a young family as well as  increasing work responsibilities that required a lot of overseas travelling. The simple nature of running allowed me to run in some exotic places. It is a fantastic way of seeing a or country and I have run in 30-odd countries that I have visited.

In 1991 I accepted a work posting to , where I lived with my family for four years. We had a fantastic time there and again I managed to continue to run – quite difficult in the heat and humidity. We also travelled to interesting events in the region, and I remember a great weekend in running the Bridge Over the River Kwai 21km. We returned to SA in 1995  and I decided to move from the south to Observatory. It was not long before I met an old running friend from the early days, Barry Holland, who convinced me to join Jeppe.

TRIATHLON YEARS
This will be my tenth year doing triathlons, but it seems only a few years ago that I nervously waited for the swim start in my first Energade Triathlon in Germiston. I started doing triathlons as a result of a challenge over a few glasses of wine with our ‘lunch club’. All our children had done the Midmar Mile swim with their schools, so I challenged my friends to make up triathlon teams, with the kids doing the swimming, the adults running and cycling, and I would do all three disciplines! I was not much of a swimmer, but my cycling and running ability saw me finish in the veterans’ top ten at that first race and I was hooked!

The competitive instinct came to the fore again, and I have loved competing in the age group categories that make triathlon so special. I have managed to finish in the top three in all SA Triathlon Champs since 2002, winning the over-50s in 2005 and 2006. Competing at the World Triathlon and Duathlon Champs in 2001, 2003, 2005 and 2009 has been a wonderful experience, especially since I could not compete overseas during my peak years due to Apartheid and sanctions. But one of the hardest events I have ever done was my 2005 Ironman – 12 hours is a long time! I would certainly recommend that all runners attempt this amazing event once in their lifetimes.

GIVING BACK
I have always believed in getting involved and so even from my early days with  JHAC, I served on committees and helped organise events and training. I am currently Chairperson of Central Gauteng Triathlon and although it can be timeconsuming, I really enjoy being involved. And I hope to be running, cycling and swimming for a good many years to come!