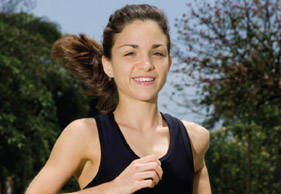 Have you forgotten why you run? Has running become more stress than relaxation? Then read on. Natasha Papini, a 21-year-old university graduate from Durban North has just completed her very first 15km road race, loves all things running and shared her newfound passion with Modern Athlete. Natasha’s running journey might remind you why you fell in love with running as well.

When her alarm clock goes off at 4:30 every morning, many youngsters her age are only going to bed after a night of partying. But Natasha Papini laces up her running shoes and hops in the car with her mom to meet up with their running group for a 10km run. For Natasha, running has become a way of life. “I love to run with people who are sometimes double my age! They give me a different perspective on life and they make the run so much more fun; from the ladies gossiping to the guys joking, all of them insisting I cover my ears. The running family is one of the many reasons why I get up in the morning; there is never a dull moment.”

Natasha is no different to other youngsters; she loves to party with her friends, but these days she has found a balance which allows her to make running a part of who she is. She has always been sporty, achieving KZN colours in fi gure skating, but she had to give it up when academics demanded more time. So she joined a gym, but eventually got bored of seeing the same interior of the same building every day.

IN HER MOM’S FOOTSTEPS
Then Natasha’s mom, Daniela, suggested running. “My mom is such an avid and amazing runner. She is the youngest 49-year-old I know and I can only wish that I will be as young at heart as she is when I am her age.”

Natasha started running on the treadmill before progressing to short 20-minute runs on the road and later easy 5km runs with her mom. Daniela encouraged her daughter to run with Regent Harriers, a group of up to 550 runners who run in Durban North most mornings. The runs not only made her fit and strong, they got her so hooked on running that she even added longer distance runs as well as quality track sessions to her training programme. She now manages 10km runs on Tuesdays and Fridays, a 15km run on Wednesdays and 60 minutes of track on Thursdays. Depending on her ’partying schedule’, she tries to run between 15km and 22km on the weekends.

And through it all, mom Daniela has been her support. “My mom has always been there to keep me company and focused,” says Natasha about her mom, who has run Comrades, Mont-Aux-Sources and Two Oceans. “I am really lucky to have my mom as a running partner. She inspires me to always work hard, not just in running but in all I do, to never give up, because what goes up must eventually come down; also with regards to all the uphills in life.”

EXHILARATION
Natasha says it is difficult to highlight just one thing she loves about running. “There are so many different aspects of running that I love, but if I had to choose, it would be the way running makes me feel after I have finished. I feel exhilarated. There is also something about running early in the morning that just makes the rest of my day so much better. I get to clear my head before my day starts and I also get to start my day so pumped on endorphins that I feel I can tackle absolutely anything,” says Natasha, who reads every single running magazine she can find. Even shopping has taken on a whole new meaning; these days she loves to shop for new running clothes. “It honestly feels as if new running shorts will make me run faster.”

It is the running community that truly keeps her inspired. “Running makes me feel part of a community other than that of family and friends. The running community is so supportive and you will always find someone willing to help you or nudge you up that last hill. There are not a lot of sports where you will find a group of individuals who get as close as the running family does.”

Occasionally she battles to get out of bed, especially on rainy days, but once up she never regrets it. “It’s a small sacrifice I am willing to make. Most of my friends think that I am crazy, but they will only really understand what I am talking about once they have experienced it for themselves.”

Natasha has convinced a couple of her friends to occasionally run with her, but says it is hard for  youngsters these days to start running. “People my age are still learning to juggle their studies, work and their social life, but we eventually learn!” She believes more can be done, especially at university level, to get youngsters involved. “Running clubs at universities often focus on elite youngsters who have been running since school days. They should offer a more social club where youngsters can socialise and get fit at the same time.”

FIRST RACE
Natasha recently completed her first race, the Stella 15km, in a time of 1:18. She was nervous at the start and thought other runners would run over her when the gun went off, but at the finish line there was no one prouder than Natasha, her mom and running friends. “I was extremely proud of myself. My mom and many of the runners I run with were really supportive and proud of my results, which made it so much more rewarding. It was also nice knowing that all those early mornings and hard work paid off.”

ROLE MODELS
“I prefer to look at people I know when it comes to role models. I can truly relate to them and say that I know what kind of a person they are, what their fears and goals are and what their failures and achievements are. My mom inspires me. I would be over the moon if I could accomplish even half of what she has.”

As for the future, Natasha plans to do many more 10km and 15km races, as well as the Two Oceans Half Marathon and eventually more adventurous races. In the meantime, she keeps on believing in herself and her newfound running ability. “Through running I have learned the mind is an extremely powerful tool, and if you know how to use it to your advantage, the possibilities are endless.”