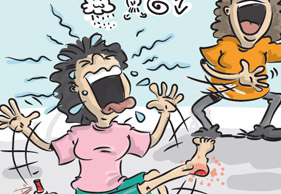 I have often heard people say that running is in the mind and every time I go out for a run, I try and remind myself of this. Of course, training your body has a lot to do with it too. After all, if running was only about mental strength, I’m pretty sure I’d be able to give Stephen Muzhingi a run (pardon the pun) for his money.

On my last real attempt at running, I had chafed the back of my foot. It was only when I gave the wound a few days to heal that I realised that this blister was not an ordinary, run of the millinconvenience. The gaping wound on the back of my heel had become infected and had begun to resemble something not
unlike the ugly-looking, cut off body parts in the Texas Chainsaw Massacre.

As a novice, I had no idea what to do with my disgusting flesh wound, until a fellow athlete told me about Merthiolate. I was told to spray this iodine-like concoction on my wound and within days, it would be gone. “It’s going to hurt,” my colleague warned me. Of course, being Little Miss Know It All, I was sure I was strong enough to endure a bit of a sting.

Spraying Merthiolate on an open sore can only be described in one word, and frankly, I’m too much of a lady to write that word down. Suffi ce it to say that the pain brought tears to my eyes, and I had to squeeze my eyes shut and count to ten before I was able to take a breath.

BACK UP AND RUNNING
It took two weeks for my heel to heal, but that was the last impediment to my running for the month. I rejoined the walking group in the morning, taking the initiative to run/walk rather than complacently follow the others, and had begun to look forward to my Sunday afternoon treadmill ritual at the gym. I went from 13 minutes on the treadmill to 20. When those 20 minutes began to feel comfortable, I stepped up the incline of the treadmill. When the incline felt comfortable, I began to increase the speed. It was with joy and astonishment that I began to notice how much better my running had become, and not just on the treadmill either.

I had done two more time trials since my first. With the second, I had improved my time by 1:20 and in the third, I had improved again by 30 seconds. Although these improvements were landmarks for me, my worries about the 2010 J.P. Morgan Corporate Challenge were beginning to escalate. I had taken my pace down to almost 7km/h, but knew that I would have to push harder than ever before to achieve the goal I had set.