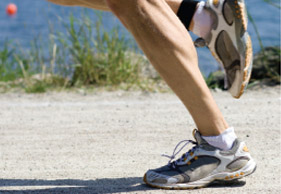 Every now and again we hear a fellow runner talking about running the coming weekend’s race on ‘muscle memory’, especially when it comes to marathons or beyond, because they haven’t been able to train as much as they wanted to. But what exactly is running on memory, and is it even possible?

When we train, many things happen in the body that enable us to run further and faster as our training progresses.

One of the effects of these changes is that the muscles of trained runners use muscle glycogen, the store of carbohydrate in the muscle, more slowly. This is important because delaying depletion of muscle glycogen delays the onset of fatigue. For example, one of the contributing factors to the extreme tiredness one feels around the 35km mark of a marathon is that the muscles become low in this source
of energy.

An additional effect of training, again due to changes in the enzyme levels in the muscles, is that muscle glycogen stores at rest become higher, by about 50%. Thus the size of the ‘fuel tank’ is increased.

BUT WHEN WE STOP…
When we stop training, all these beneficial changes gradually revert to normal. However, it is not clear just how quickly this happens. We know that the reversion back to sedentary levels can occur quite quickly, but that the longer one has been training, the longer this process takes. We do not have any research information for the timecourse back to the untrained state in runners – or other sports people, for that matter – who have been training for many years.

If at least some running has been maintained, it is likely that the loss of the training-induced adaptations may be quite slow. Some of these changes back towards the untrained state will occur faster than others. Nevertheless, when an experienced runner talks of running on memory, some of the training adaptations
that occurred at the muscular level during previous training, and that have not yet reverted back to the untrained level, will help get the runner through the race.

MUSCLE FIBRE CHANGES
Besides the changes discussed above, there are a number of other training-induced changes that will persist for some time after hard training has stopped, and will put the runner in a better position to complete a marathon than someone who has never trained. One of these involves possible muscle fibre changes.

Although there is little evidence for major changes in muscle fibre type as a result of training, it appears that there may be enhancement in muscle contraction (contractility) and improved resistance to fatigue. In part, this may be related to the significant increase in the number of blood capillaries surrounding each
muscle fibre, which allows for an increase in the ability to transport oxygen and fuel to the muscle cells when needed.

RUNNING EFFICIENCY
At any given submaximal (below maximum) running speed, the amount of oxygen used is termed the submax VO2 and is referred to as running effi ciency or economy. Running economy (VO2) at any given speed may be higher or lower than average, but having an improved economy (lower submax VO2) is what is hoped for.

Now, running economy tends to improve after years of endurance training. As a consequence of the lowered submax VO2, the percentage of VO2 max at any given running speed is reduced after training. Since the perception of effort is related to the percentage of max, this reduces the perception of effort
at any particular running speed, which in turn results in it being possible to run for longer at any given speed after training than before training.

Although specific research evidence is lacking, it is likely that the improvement in running economy persists for some time after training has been greatly reduced. This of course would contribute to the physiology that allows us to ‘run on memory’.

MEMORIES…
Running on memory is therefore not only possible, but can be explained by some of the physiological
changes that occur as a result of slowing down and returning to an untrained state. Although some of
the initial ‘losses’ are quite rapid after three weeks of no training, subsequent rate of loss may be
considerably slower, particularly in runners who have been training for many years and if at least some
training is being continued.

This differs from tapering. In the case of tapering prior to an important race, while running is reduced,
key sessions are maintained which allows the muscle to recover from fatigue of training, without
de-training occuring.