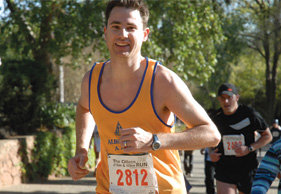 Since I was a boy, I’ve been watching Comrades on TV every year and dreaming about ‘one day’. After my school years fl ew by, I started working, got married, had kids and the dream always stayed as ‘one day’. In August 2008, I again had the ‘one day’ thought, but this time, for who knows what reason, I hung onto it for a couple of days and finally made the gut wrenching decision to do the Comrades Marathon. That meant I probably needed to become a runner first.

I went to my local club in Alberton to find out what running and particularly, running the Comrades, was all about. The chairman was awesome and I did my fi rst 4km run on 3 September 2008 and my first 10km race (The Citizen Gerald Fox) on 19 September. This race was followed in quick succession by my first 15km race, the Porters Auto Germiston Callies on 28 September and my fi rst 21km half marathon (Carnival City) on 19 October. I think I trained a little more than the average novice, clocking 840km from November to January.

I completed my first 32km race in February 2009 and fi nally, ran and completed my first marathon, the Cape Gate Vaal Marathon in March. I was hoping for a D seeding for Comrades (under four hours for the marathon), a goal I had worked hard to reach. My running partner pulled me a little faster than I planned, but I felt good and stuck with him as far as I could. At 36km, I had to let him go, but managed to finish in a great time of 3:27. In the seven months preceding this race, I had become a runner and
had qualified to start the 2009 Comrades Marathon with a C seeding.

After the Old Mutual Om Die Dam 50km Ultra, I started thinking that there was an outside chance for a Bill Rowan and my coach confirmed it, so I set my heart on it. By now, most experienced runners would be spotting the big BUT, and here it is. After the Easter 100km run, I felt a little pain on the outside of my knee. It was ITB (Iliotibial Band Syndrome). I tried to run my final 60km six weeks before Comrades but was told to bail at 38km. I spent the last few weeks before Comrades rehabilitating my knee, but ITB does not go away in a few weeks. I wasn’t sure if I’d be able to finish Comrades let alone run nine hours.

On the Monday before Comrades, I realised that my ‘one day’ had become real and that’s when the nerves really set in. It became even more real when we stopped at the Wimpy in Harrismith on the way down to Durban and saw all the runners and supporters making their way down to KwaZulu-Natal. Before I knew, it was Saturday evening and the start was less than 12 hours away. I would have happily taken up an offer to postpone Comrades by a few days or weeks at that point. I woke up at 2am, got dressed, double and triple checked that I had everything and drove up to Pietermaritzburg with friends. There it lay in front of us, the City Hall and the starting blocks filled with thousands of crazy runners. It was over so quickly. One moment, it was 4:30, then 5am and then 5:25; the Final Countdown, Chariots of Fire, cock’s crow and Bang!

As we went up and out of Pietermaritzburg, with that long climb in the dark, all that went through my mind was, “How long will the knee hold and how sore will it get?” When I got to the top of Polly’s, I started to pray. “Please Lord,” I begged, “Make my knee hold”. The physio had told me to try and run with a straight leg on the downhills to reduce the friction, so I waddled down Polly’s, being passed by lots of runners. The knee was holding, but I kept on praying and before I knew it, we had reached the top of Umlaas Road. Through Camperdown, the crowds were ten times bigger than I ever thought and I will never forget that feeling. I got to Cato Ridge and have never been so happy in my life to see my family. I felt love for the local crowds through Harrison Flats, I was still on pace and the knee was holding.

My next goal was halfway, knowing that my family would be there. But the wheels came off when I started climbing Inchanga. My knee let me know that I still had ITB. I had been scheduled to take my second Vooma, but thought I would do it when I saw my family. Sadly, my family didn’t make it to halfway and I hit a wall. I started walking more than what I needed to and I lost about 15 minutes from 40km to 50km. This was by far the hardest part of Comrades for me.

I finally saw my family in Hillcrest. They offered me everything; sandwiches, sweets, fruit, you name it, but I didn’t feel like any of it. In retrospect, I know I should have taken something. Strangely, I got my rhythm back and fl ew through Hillcrest and down fi elds in sub 6s and realised that I could still get the Bill Rowan if I could maintain around 6min/km. I did the 25km to 45th Cutting in 2:30 and felt strong knowing the nine hour bus was still behind me!

Little did I know, another hindrance would be thrown in my path. On the highway, with about 5km to go, the ‘lights went out’ My eyes started to close as I was running and I felt like I was going to faint. Yes, I know I should have had more Voomas and some food along the way; I’ll remember that for next year! Then came the heartbreak. When I heard the nine hour bus coming from behind, I knew I would not be able hold on because I could hardly stay upright. I saw a lady next to the road eating a hot dog and without thinking, I just asked her if I could have half. She willingly obliged and gave me the whole
hot dog. That was the best hot dog I’ve ever had. I saw a half empty Powerade on the side of the road and without stopping to think about or even care for the germs, I just downed it.

By the time I had collected my wits again, I realised the Bill Rowan was gone and my legs were rock hard. I walked the remaining 4km to the stadium. As I got onto the grass, I decided that, stiff legs or not, I would run the last 100 metres to the end. I cried from the pain, the disappointment, the relief and the overwhelming pride. That was before I even crossed the finish line. I really bawled when I crossed the line and if that was not enough, I broke down when my wife put her arms around me.

Although I had fi nished 30 minutes slower than I wanted to at 9:29, I had realised a childhood dream. I had finished the Comrades Marathon, the ultimate human race and I have the medal to prove it. I have no doubt in my mind that I’ll return for next year’s race, more focused, tougher and better prepared.