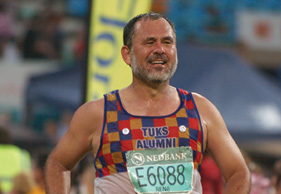 The mystique of the Comrades Marathon captures the imagination of South Africans every year. The organisers call it The Ultimate Human Race. It certainly is the only foot race of nearly 90km in the world that attracts around 13 000 participants yearly. In addition to the runners, some 300 000 spectators provide support along the route. It is difficult to understand why so many people run Comrades, because anyone who has tackled this epic challenge will testify to the gruelling nature of it. How then can its popularity be explained? In my view, Comrades offers ordinary people like you and me the opportunity to do something truly extraordinary. It offers a real challenge and South Africans love a challenge. The race belongs to the masses as much as it belongs to the 100 or so hopefuls who believe they stand a chance of winning.

EARLIER YEARS
In my late 20s and early 30s, I completed seven Comrades marathons with two silver and five bronze medals. I didn’t run again for nine years. Between 2002 and 2004, I returned to complete numbers eight, nine and ten. After receiving my permanent green number for completing ten runs at the age of
45, I decided to hang up my running shoes. Until 16 February this year! A good friend and old running partner suggested we give Comrades 2009 a go, given the fact that we both turn 50 this year. I started training the very next day.

The harsh reality was that we had a mere 14 weeks to race day, and only eight weeks before we had to run a standard marathon in under five hours to qualify. The biggest risk was over training causing injury or illness due to our over eagerness to get fi t quickly. My training went reasonably well and I managed to qualify in time. My friend was less fortunate. He pulled a hamstring and had to withdraw. I followed three simple yet strict principles in training to minimise the risk of injury: I never trained on sore legs; I scheduled weekly visits to the physiotherapist for a sports massage; I employed a walk-run strategy.

SELF DOUBT AND NERVES
The weekend before race day, I questioned my reasons for wanting to run Comrades again. Surely, I didn’t need to prove anything to myself or anyone else. I also started doubting my ability, especially since I’ve battled to run long distances ever since my knee scope four years ago. Was I too old? Had I done enough training? Those who claim to know reckon a minimum of 400km from January to race day is required. I did a mere 384km. I only did one marathon race, three half marathon races and two 20km
training runs.

I didn’t find satisfactory answers to my questions, but on the spur of the moment I decided to ask my friends, family, loved ones and business connections to pledge funds to the Starfish Foundation (which does amazing work with AIDS orphans). The condition was that I would fi nish and earn a medal. My dream was to raise R100 000. The fund is currently sitting on R120 000 and money is still pouring in!

The day before the race was registration at the huge expo in Durban. At the green number counter, the gentleman who assisted me noticed that I was doing my first run in my green number and greeted me with a warm smile, a fi rm hand shake and a “Welcome to the Club, Ren?!” The moment was a lot sweeter than I ever expected. I can’t explain why. Maybe because this was one club where money couldn’t get you in. Another exhilarating experience was my visit to the Starfi sh stand at the expo. The ladies there were ecstatic to hear how my fund raising exercise was progressing. They gave me an orange wristband and insisted that I wore it on race day.

RACE DAY
The 30 minutes before the start of the race were awesome and humbling. Over the sound system,  Ladysmith Black Mambazo’s rendition of Shosholoza blasted. All 13 000 runners joined in. By the time the national anthem followed, my whole body was covered in goosebumps and I battled to hold back the tears. Finally, fi ve minutes before the gun, the well known sounds of Chariots of Fire fi lled the chilly
early morning. Then I knew; this was special. I was one of 13 000 South Africans of all races and creeds, all walks of life, some rich, some poor, all with a common goal to get to Durban in less than 12 hours. I realised we were all equal and that social status meant nothing. We were in this together, and we respected each other as athletes, co-runners, human beings. The lady in front of me turned around with a big smile and said, “You know all the words and the tunes. You sing well.” I acknowledged her kindness and silently hoped that my running would also be on par!

I battled from the start. It is dark and cold at 5:30 at the end of May in Maritzburg. For some reason, all my muscles felt tight. I couldn’t fi nd a comfortable rhythm and my breathing was erratic. I bumped into people in front of me. I urgently needed a toilet. I wasn’t happy. Matters improved somewhat after an hour on the road. The field was more spread out, which allowed me to get into a comfortable rhythm. My goal was to run the fi rst half of the race at around 7min/km, which would get me to Drummond (halfway) in 5:15. Anything under 5:30 would have been fi ne. That would leave me with 6:30 for the second half. The problem with the down run is that the fi rst 21km happens to be more uphill than downhill. I went through 10km in 1:15 and 20km in 2:30. I was averaging 7.5min/km – slower than planned! Even more worrying was the fact that my left hip fl exor felt very tight. In fact, it felt as though the muscle was going into spasm.

This was very disconcerting. I was mentally prepared for setbacks, but not so early into the race. I stopped briefl y at a water station and got hold of a block of ice the size of a cricket ball. I applied it to the tight muscle and it seemed to work. Passing the Ethembeni School for disabled kids around 35km at the foot of Inchanga, provided fresh food for thought. Most of these kids are unable to run. The privilege of being healthy and able to be part of this great race was once again imprinted on my mind. For a couple of hundred metres, the pain eased off a bit.

TOUGH TIMES
I went through Drummond slightly behind schedule in 5:32, but I was already severely fatigued. I battled to convince myself that I had enough gas in the tank to do another 45km in under 6:30. To make matters worse, the fi rst 8km after Drummond is a long, nasty climb commonly referred to as the back of Botha’s Hill.

I walked most of it. My only hope was that I would be able to capitalise on the long, downhill 20km stretch between Hillcrest and Pinetown. But I had to get there fi rst.

I managed to pick up the pace slightly once I reached Hillcrest. My enemies were the pain in my knees and quads caused by the downhill pounding and the hip fl exor spasms that persisted. I had to dig deep, focus on rhythm and breathing, ensure my fl uid intake at the water points was suffi cient, and visualise
myself getting to Durban in one piece. I considered bailing a number of times, but the orange Starfish wristband around my left wrist reminded me of my noble cause, raising funds for poor, less fortunate kids. The uniformed boys of Kearsney College between Botha’s Hill and Hillcrest provided another example of the massive disparity between the ‘haves’ and the ‘have-nots’ in our country.

Although I moved more freely now, I couldn’t help thinking that this was just not fair. Bad patches don’t last, is what most experienced runners believe. The problem was that my whole race thus far had been one long bad patch! The toughest section between Hillcrest and Pinetown, the 4km long, steep downhill
known as Field’s Hill is particularly painful. My legs were jelly by now, and my 104kg frame didn’t make matters easier on my knees and hip joints. My only consolation was the fact that all the runners around me were taking strain as well.

I reached Pinetown feeling groggy and very sorry for myself. The race was turning into a war zone. Disillusioned runners who had simply had enough were standing, sitting and even lying all over the place. I still had 21km ahead of me and I realized I had to make a decision to continue or not; simply feeling sorry for myself was not helping at all. By now, the KZN humidity and heat were becoming another complicating factor and on top of all, my nose started bleeding. A plug made from toilet paper had to prevent the blood from running freely, not a pretty sight! Nevertheless, I took a firm decision there and then that I wouldn’t give up. If I failed to fi nish, it would not be because of a conscious decision on my part. In fact, the only other way I would leave the race would be on a stretcher. I decided to run tall, to lift my chin, to pull back my shoulders and remind myself I had a right to be here. I was an athlete. A champion.

REACHING THE FINISH
With 18km to go, I reached the dreaded Cowie’s Hill, the last big hill on the down run. I decided to walk the full 1.2km. I sent an sms to my fi anc?, my kids, family and some friends, saying, ‘On Cowie’s, 18km to go, 2:50 to 12:00 cut off. Going to be close.’ I had to run at a pace of 9.5min/km to finish in under 12 hours, which was more than my average running pace of 7.53min/km. That sounds good on paper, but on tar in the Durban heat after slogging it out for 71km, I was still unsure I would finish.

I reached 45th Cutting (12km to go) after ten hours of running. My fianc? was standing next to the road cheering me on. With all the courage I could muster, I told her I would fi nish in time. It was 15:30. It was muggy. I was hot and tired and my nose was still bleeding. I was now in extreme ‘vasbyt’ territory. All the runners on the road were quiet. Everyone was focused on simply putting one foot in front of the other, moving forward at all costs. I reached the 5km-to-go board on the stroke of 11:00. Only severe
cramping or some other unforeseen disaster could prevent me from finishing in time. My nose miraculously stopped bleeding and when I saw the 1km-to-go board with 27 minutes to cut off, I knew Comrades 2009 was in the bag!

I can’t explain the relief and elation when I entered the stadium with a big smile, punching the air in sheer delight. It felt as though the thousands of frenzied supporters were all shouting for me. I finished in 11:41. It was a hard day at the office, to say the least. The Ultimate Human Race? Pretty inhuman, if you ask me.