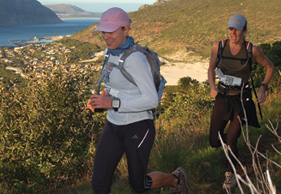 SATURDAY 25 JULY – CAPE TOWN
The ninth HANSA Hout Bay Trail Challenge took place on Saturday 25 July. One of the more sought after and toughest trail runs in the country, this awesome challenge takes participants over 38km of off-road trails around the amphitheatre of the mountains surrounding Hout Bay. It’s advertised as a 35km trail, but my Garmin clocked in at 38.5 km, so I’m going with the Garmin. Participants can compete individually or in a team of three. I chose to do the whole thing and it turned out to be one of those days when I felt invincible and could have run forever. That elusive ‘runner’s high’ that we all chase and have experienced from time to time, chose to visit me during my run. This is my race day story, which I hope will inspire some of you to take to the trails… you definitely won’t regret it.

I opened my eyes and took a quick glance at the clock next to my bed. It was just before 5am. You’ve got to love it when you’re awake just before that alarm goes off. Race day was here and it was clear and chilly, but defi nitely not the expected 3?C that had been forecast. What a relief. I woke up with that nervous, butterfl ies-in-my-tummy feeling… the pre-race jitters. My previous Hout Bay Trails had been long and hard and although I was fi tter, my mind was taking me back to last year’s race and panic was setting in. The ultra runners reading this are probably thinking, “Come on. It’s only 35km… why the panic?” To put it in perspective, Oceans takes me fi ve hours and this race has taken me just over seven hours in previous years… and it’s much harder.

After the ritual morning coffee, I made some peanut butter and honey sarmies for my running buddy, Mark, and me, and got all my gear together. Then I was in my car and heading for Hout Bay Yacht Club to register and meet up with friends. Registration was buzzing. There was a mixture of hardcore trail
runners with that ‘been there, done that’ look about them, many of them with the t-shirts to prove it, and the newcomers with ‘deer in the headlights’ looks.

They scanned my race passport to confi rm I was in the race. Passports are compulsory for the long trail events so that they can track participants at various checkpoints. It also adds to the challenge as you have to make sure you clip it at the start, finish and the checkpoints along the way, otherwise you risk time penalties and disqualifi cation. Then it was over to the equipment check, where they checked for vital things such as a space blanket, first aid kit and a waterproof/windproof jacket. These are items you should not be on the mountain without, no matter how experienced you are.

The race started at 7am. It was still dark but the sky was getting lighter and dawn was approaching. The runners all headed off in different directions, some taking the road, others sticking to the harbour road that led to the last gap in the fence. I took this option as we’d done some pre-race homework and  checked out our options. This is where the tar ends and the soft beach sand begins. From this point, it was straight up a steep path and onto the dunes. By this stage, your lungs are gasping for air as it’s a sprint to get onto the dunes before the masses.

From the sand dunes, we zigzagged through the houses of Harbour Heights and took a steep climb up onto the Karbonkelberg trail. This is a serious climb as it goes on for a good few kilometres up to the
Old Radar Station, the first checkpoint. It’s badly eroded in sections from the winter storms, which makes it diffi cult to get a rhythm going. But I was feeling great, had got a good start and was running within myself

After scrambling up to the Radar Station and clipping my passport, I was on my way to Suther Peak through very wet, muddy trails that are overgrown with Fynbos, but it was all part of the trail experience. Once I  got through the yellowwood forest and another passport clip, there was some serious downhill scrambling over rocks and through bushes. I looked down at my legs and thought, “This is hardcore.” There were cuts and bruises dotted down my shins but I pushed on. Then it was over to the abseiling section where we had to climb down the ropes to get to the path. Trevor, the Crazy Mountain Race organiser, was there taking photos and chirping everyone about feeling the thigh burn later on. Everyone was in good spirits, laughing and joking… it was ‘early days’.

The route takes you up above Sandy Bay, where you can see for miles around. The sea was a gorgeous turquoise blue – it was a peach of a day and I was out on the mountain doing what I loved. From the sand dunes above Sandy Bay, the route took us through Leeukoppie Estate and down to Suikerbossie
Restaurant for much needed refuelling. After scanning my passport and refuelling on various goodies, it was off up the massive climb of Llandudno Ravine. This steep climb takes you up onto Table Mountain. It’s impossible to run some sections of this climb and there are hand railings and lots of rock climbing to get you up to the top. I got to the top feeling great. I was having one of those days. I kept picturing Lance Armstrong and how tough and determined he is. That’s what kept me going – picturing that grit and determination that gets him through. If he could do it, I could do it.

During most of our training runs leading up to Hout Bay Trail, the weather had been misty and rainy – typical Cape Town weather – so the mountain and the route somehow looked different. At certain
stages, there was no one in front or behind me but that’s trail running for you… you’re out there on your own. It was head down and just keep going.

Eventually Woodhead Dam was in my sights, which meant that stage two was almost over, and I was way ahead of schedule. From the dam, the trail becomes a concrete road that winds down to Constantia Nek. It is unbelievably steep and the punishing downhill really started to take its toll on my legs.

The next passport check and scan is at Constantia Nek where you can check in with friends and family and get some much needed food and drink. I was looking everywhere for my second, Stefanie, but
because I was half an hour ahead of schedule, she hadn’t gotten to the Nek yet. The Hammer table was stocked with loads of goodies, so I filled up my CamelBak and headed on out to start Leg Three.

Leg Three is the shortest leg and not really all that tough if you are running it on its own, but put it together with Legs One and Two and you’ve got a serious challenge on your hands. From Constantia Nek, you head straight up the mountain – up the Vlakkenberg Steps – but once you’re up over the top, an undulating trail awaits you. The Hammer Gels kicked in and I got my second wind and that’s when
my runner’s high kicked in… I was flying, getting stronger and stronger. The finish was getting closer
and the possibility of breaking six hours was looming.

The trail winds along a contoured path high above Hout Bay and ends at the Manganese Mines above Chapman’s Peak and East Fort. From here, I could see the beach and was homeward bound. The descent to Chapman’s Peak is tricky as it’s very rocky and you really need to watch your footing as it’s easy to twist an ankle, especially on tired legs. Once I got down onto Chapman’s Peak, it was a cruise across the beach and to the finish at Hout Bay Harbour, which was a welcome sight. Runners were swapping war stories and the beers were fl owing. I ran into the fi nish on a high. I didn’t manage to break six hours but crossed the fi nish line in 6:12, a PB by almost 45 minutes. All that hard training had paid off!

The Hout Bay Trail Challenge is an incredible race and one I can recommend. In winter, I’ve explored some amazing trails and come to realise that we are very spoilt here in Cape Town living so close to some of the most beautiful trails in the country. What I enjoy most is the companionship of my training partners, some of whom I’ve been training with for years and others who I’ve just started with. I look forward to our session each weekend and that’s what keeps me going. My ultimate challenge for 2009 was to complete PUfFeR (Peninsula Ultra Fun Run) and I’m proud to say I made it. But that’s another story for another day.