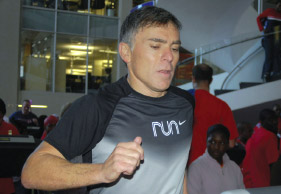 Between stressful jobs and trying to spend quality time with the family, exercise is often the fi rst thing that falls to the bottom of our list. In a series of features on how to balance a busy career with running, Modern Athlete speaks to various high-powered professionals to fi nd out how they manage to fit sport into their hectic schedules. This month we chat to Adrian Gore, founder and Chief Executive Officer of Discovery.

What is your background and how did you get involved in Discovery?
I graduated from the University of the Witwatersrand (Wits) with a BSc honours degree in Actuarial Science. In 1990 I was admitted as a Fellow of the Actuaries (Edinburgh). I started with Liberty Life, where I worked for six years, heading up product development. I left Liberty in 1992 to start up Discovery Health. In the 17 years since launch, Discovery has diversifi ed its operations into the areas of life assurance, investments, financial services and wellness. Today, Discovery’s total revenue is close to R30 billion per annum. Worldwide, the group covers almost 2.5 million lives.

What is your greatest moment in business?
I have been remarkably lucky and privileged up to now. I have had a very good career; the start of Discovery obviously stands out. I am very passionate about the brand because it has the ability to greatly impact society.

How long have you been running?
I started running when I was 11 years old. I am now 45. At school I played a lot of sport, but a friend and I used to run a 5km route around Sandton. It was a killer! Through my high school years, I spent a lot of time racing motocross, but kept on jogging after school. At university I started running marathons. Running wasn’t very popular in those days – most people were into aerobics.

How do you fit running into your busy life?
Running is a central part of my life. I don’t function properly without it. Whenever I get a chance to run, I do. Because of my schedule, it is very hard to run during the week, but every morning I run 30 times up and down the stairs of my house. It takes me about eight minutes and it is a brutal workout! It really gets my heart rate up. Afterwards, I do some push-ups and sit-ups. I also try to run on my treadmill at home, even if I come home at 10pm. I travel extensively, but even then I run up and down stairs. When I am at a hotel I find the fire escape and hit those stairs, even if I get there at 12am. At the office in  Sandton it’s no different; many times after a tough meeting you will find me running up and down the stairs. On weekends, I try to do a 10km and 15km run.

Describe a typical day in your life.
I start at 5:30 catching up on emails. Then it’s time for my stairs workout before I get ready for the day. I take the kids to school and I am at the office by 8:00. A typical day is anything between 12 and 14 hours long and a typical week between 60 and 70 hours.

What do you see as the biggest obstacle to your running?
Time!

Who do you run with?
I have a good friend, Dan Wolov, who I run with on weekends. Dan and I have been mates since Grade 1 when we were five  years old. We talk so much nonsense when we run; it’s a fantastic experience. I like to run fast and not just jog. My average speed is about 4min/km. The weird thing is with time I have not really slowed down. I believe running gives me longevity.

Do you regularly run road races?
No. I belong to the Discovery Running Club and I have done a few marathons, but I don’t run regular road races. I have run the City2City and the former Johannesburg Marathon. When I travel overseas, I love to run some of the international city marathons.

Which international races have you run?
I ran the New York, London and Berlin Marathons. It is a pity so few South Africans get the  opportunity to run these marathons. It is not just about the race; it’s about the whole experience, arriving in a different country with the whole city fi red up to put on a spectacular event. There are beautiful runs in South Africa as well. The Soweto Marathon and the New York Marathon were run on the same day last year. The irony is that a lot of international runners would have much rather run the Soweto Marathon.

What is the nicest place you have ever run in?
Internationally it must be the island of Capri in Italy. It is a very small island and there is a pathway up stairs through a village to the other side of the island. It’s about a 10km run. What a magical experience running there while listening to classical music on my iPod. My favourite local run is a 15km route through the northern suburbs and halfway we stop for coffee.

Has running influenced your career and work ethic?
Yes and no. I have run my whole life, so I don’t know who I am without it. Running has been part of my life since childhood; therefore the discipline of it is reflected in my work.

Why do you enjoy running so much?
When I run, I am totally disconnected from things such as cell phones and the internet. No one can get hold of me. I am on my own or with a friend, with very little interference from the outside world. It is fantastic. And Johannesburg is such a great place to run in, especially with our weather. I also love the feeling of freedom when I run and the feeling of achievement when I finish.

What is the best and worst advice you have been given with regards to running?
I read a lot of Prof. Tim Noakes’ articles and books. I know him well and he has given me some good advice on the socalled governor theory, which states that the fatigue you feel is psychological. Your brain controls how you feel and the pain you sometimes feel can be controlled by a strong mind. That has given me a different perspective on running. Because I don’t really run races, I don’t mingle much with the running community, so I haven’t received a lot of good or bad advice.

After a morning run the fi rst thing I like to do is…
Ideally jump in the pool and relax.

My greatest ambition in running is…
I ran a 3:25 marathon years ago, but these days I would love to just run a sub-3:30 marathon.  Unfortunately, injuries just don’t allow me to run further than 21km before hurting. So when I do run marathons, I usually hobble the last few kilometres. A half marathon is the perfect distance for me. I take my hat off to those people who run Comrades. For me it is just too far, but I would love to still run the Boston and Chicago Marathons. That would be worth the pain and effort.

Are you competitive?
I don’t care at all who beats me! When I run a marathon, there are a thousand people behind me and a thousand more in front of me and it doesn’t matter. In business I have to be organised and aim to be at my best all the time. In running I get a kick out of knowing there is no pressure at all.

Who are your running role models?
I don’t really have any, but at university it was probably Bruce Fordyce. He is such an iconic figure, especially for all of us who started running in his era. I could not go running without my… Garmin watch. It’s like a cell phone. Without it I feel uneasy. When I run I feel I need to be connected to my Garmin. I don’t use the heart rate function, but I do use the distance and speed functions. I am hooked on it; even if it is just a short run, I have to wear it.

Is your family active?
My kids (two daughters and a son) are sporty, but they don’t run. My eldest daughter always promises she will one day run a 10km race with me. My wife, Lauren, is very fit. She goes to gym regularly and runs on the treadmill.

What would you say to someone who says that they don’t have time to exercise?
If you are determined to exercise, you will fit it into anything. I am an obsessive character; when I wait for my wife to finish something, I will run up and down the stairs knowing it’s a workout done. You can even do the same type of exercise while talking on your phone. Running does not take a lot of time,
it’s not like golf. You can always find time for a run. When I was training for marathons we started in pitch dark, but it was amazing how many people were out there doing the same thing. People who are locked up in their homes don’t always realise how many people are out there on the road having fun and
experiencing freedom.

What are your future running goals?
I am very keen to do a fast half marathon soon. I am also aiming to run another New York Marathon. I believe that when you run, you need goals to work towards.

Life motto?
I don’t really believe in life mottos. But I am a great believer in positivity in any form. I do believe your
future and destiny in life is a choice you make.