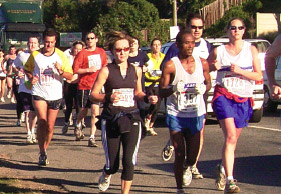 Many towns around South Africa hold an annual festival to celebrate whatever that town or area is famous for, be it wine, witblits, oysters, olives, sweet potatoes or the performing arts. Here’s a list of great festivals that offer an extra incentive to all Modern Athletes – a running race as part of the festival. Keep your diary handy while reading this article, because you’re sure to start making plans.

The Festival: Throughout Southern Africa, the ripening of the marula fruit from December to March is celebrated with the Feast of First Fruits. The three-day party celebrates the legendary marula tree and its fruit – from its use as a place of worship and the magical healing qualities of its bark, leaves, nuts and fruit, to it being used as a food source and to make delicious traditional beer.

The Race: The absolute essential piece of advice for this race is that you should wait until after the run to join the Feast of First Fruits, because running after a few glasses of marula beer is not recommended!

The Festival: The Klein Karoo Nasionale Kunstefees in Oudtshoorn features both well-known and young up-and-coming artists in dance and theatre. Started as an Afrikaans alternative to the mainly English National Arts Festival, KKNK has 200 different acts on three different stages.

The Race: This interesting race is fl at and very scenic. Starting at the Wesbank Laerskool in Park Way, the route goes past the old Ostrich Palaces, through Oudtshoorn and its surrounding areas. www.kknk.co.za

The Festival: Head to the Great Karoo for a weekend of great music, great food, great wine and great olives. The Karoo night skies are a wonder not to be missed – the stars literally reach out and touch your eyes, so go on a stargazing tour with local experts or just stand and marvel while you enjoy the serenity. Stress is not an option here!

The Race: The event is run through the historic and beautiful Karoo town of Prince Albert. You will be treated to the scenic splendour of the Swartberg Mountains from a vantage point before turning for the run back along the main street.

The Festival: Not much info is available, but if you’re into sweet potatoes, let’s just say that this is the place to be. From a running perspective, this festival and race always used to coincide with the Comrades Marathon, so it remained a hidden gem. No excuses now that Comrades has moved to May – get there this year!

The Race: This tough, hilly course starts off deceptively with an easy 2km downhill canter through the village, before heading out onto farmlands. Around 6km, the course becomes a gravel road passing fields of giant Proteas. The hard work only begins after halfway with a continuous 5km climb through
plantations of barley, wheat, oats and canola to the highest point at 16km. This is a good time to breathe deeply and enjoy the scenery before a pleasant jog back to Napier. Beware the fi nal sting in this
beauty’s tail…

The Festival: Award-winning chefs and winemakers set up stalls in the town centre, offering delicious
fare from local and imported cheeses to handmade chocolates and salmon trout from the valley,
complemented by Franschhoek’s fi ne wines. The town’s restaurants, craft shops, galleries, boutiques
and food shops will be offering specials and guests will also be able to try their hand at boules, listen
to musicians or shop up a storm at market stalls.

The Race: Franschhoek is a truly stunning venue for a race, surrounded by vineyards and mountains. The flat route is half on tar, half on gravel, starting and fi nishing at the Huguenot Monument. This is one of those races where you really should slow down to enjoy the view! www.franschhoek.org.za

The Festival: The coastal town of Knysna is famous for its oysters, and increasingly famous for the July festival that celebrates them. In addition to oyster braais, oyster tasting, oyster-eating competitions and other molluscular activities, there’s live entertainment, and lots of sporting events – cycling, running, triathlon, canoeing, downhill racing, and more. The organisers promise something for everyone – for food fundis, art and music lovers, outdoor and sporty types, for the adults and the kiddies.

The Race: This a mean marathon in terms of hills, but the spectacular route through the forest more than makes up for it. Listen out for the call of the Loerie birds as you trundle along. The half is the bigger race, though, attracting thousands of temp licence newcomers each year. Just dress warmly at the start in the forest, because it is f-f-freezing! www.oysterfestival.co.za

The Race: Running events in Kimberley are usually fairly small by the standards of Johannesburg or and a pleasant ‘local is lekker’ approach. www.gariepfees.co.za

The Festival: Every year, southern right whales travel thousands of miles to the Cape south coast to mate and calve in Walker Bay. Join the villagers of Hermanus for an entertainment-packed festival in the town with the best land-based whale watching in the world. Watching a whale breach – when it comes up nose first, lifts high out of the water and fl ops back again, causing a huge splash – is truly unforgettable.

The Race: It starts with a short hill in the first kilometre, then fl attens out as you run through town to the new harbour and onto the coastal road where there are a number of testing pulls. The toughest hill is found near the 18km mark – short, but steep. This is a scenic event, especially the section along the
seaside pathway. www.whalefestival.co.za

The Festival: Vredendal is home to the annual ‘Rittelfees’, a three-day Afrikaans music festival with seven stages and over one hundred great artists performing, plus arts and crafts, sporting events, exhibitions and food stalls. Vredendal is a scenic three-hour drive up the West Coast N7 highway from Cape Town.

The Race: Overall this ranks as a moderately challenging course, run mostly on tar but with a short 4km gravel section. There is also a fun relay event for teams and schools. www.rittelfees.co.za

The Festival: First held in 1969, the week-long Cherry Festival is the oldest crop festival in South Africa, and attracts around 20 000 visitors to this small eastern Free State town each year. The scenery is magnifi cent, and the festival offers cherry and asparagus tasting, tours, picnics, music and beauty pageants.

The Race: Any mountain race presents its own challenge, and this race is no different. The first 13km will prove challenging, but this route is known are well worth the effort. This event could win the prize for the most picturesque race in the country. It is held at the same time as the cherry crops.  www.cherryfestival.co.za

The Festival: It started off as a small festival to complement the multi-sport Totalsports Challenge, but has grown into a month-long celebration of summer, sun and sea. The festival takes it name from the Blue Flag status of Kleinmond’s pristine main beach. The festivities feature some of SA’s most popular musicians as well as a variety of family and fun activities, craft, food and wine stalls, exhibitions and sporting events.

The Races: Choose between the Big Blue Hangklip Half Marathon, four 10km races that make up the Big Blue Summer Series, an XTERRA off-road triathlon and trail run, and the big fi nale, the Totalsports Challenge. Plenty of running here! www.thebigblue.co.za