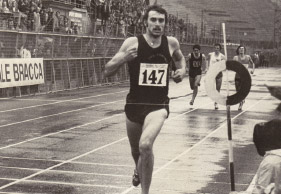 On 27 June 1973, a young South African track athlete broke the 800m world record in Milan while running for Italy. But in his heart, Marcello Fiasconaro was as South African as can be – no one knew that his blue ‘Italian vest’ was actually a Southern Transvaal vest turned inside out. It was his lucky vest, which he had worn when he won the South African Track and Field Champs earlier that year, and he was going to run in it, no matter what!

Recently, Marcello Fiasconaro, now aged 60 and living in Benmore, Johannesburg, was surprised to be invited to the Italian Consulate’s cultural week. An even bigger surprise lay in store for the former 800m world record holder when he was awarded an Italian knighthood, known as the Cavaliere Ordine al Merito della Republica Italiana. This is the highest honour that can be bestowed on an Italian civilian. He was presented with a certifi cate signed by both the President and Prime Minister of Italy, along with a huge medal that he may now wear to Italian state functions.

The award was presented to Marcello in recognition of all the work he does in the Italian community in South Africa, and for his running exploits in the colours of Italy. His 800m world record was beaten in 1976, but 36 years after running 1:43.7, it remains the Italian national record, and one of the longest-standing athletic records in the world.

Marcello was just 24 when he set his world record, and it marked the pinnacle of a short but glorious career. He only started running at the age of 20 and retired five years later – but he made those years count:

EARLY DAYS
During World War Two,Marcello’s Italian father, Gregorio, was held as a prisoner of war in South Africa, where he entertained the locals with his music. Before he could return to his home country at
the end of the war, however, love found its way into Gregorio’s heart when he met his wife, Mabel Marie, from Pietermaritzburg. They settled in South Africa where Gregorio became a professor of music at the University of Cape Town’s Opera Company. Marcello was born in Cape Town in 1949.

“Stewart suggested the rugby guys train with his athletes so they would be strong and fi t for the next rugby season. That was how I realised I was a much better athlete than a rugby player,” says Marcello, who today works as an agent for adidas.

THE START OF THINGS TO COME
Marcello was working as a foreign exchange teller when the Celtics club secretary phoned him one day to ask him to run for the club. “They needed some entries for the sprint category at a meeting held the next day in Belville. She asked if we were up to it. Miles O’Brian, a friend of mine, and I agreed, but we
panicked! We thought a run that afternoon might help us the following day.”

Marcello and Miles ran 8km to the top of the Kirstenbosch Gardens and back. “It was ridiculous  thinking the run was going to help us at the meeting the next morning! When we got there, we were so stiff and sore, but I managed to win my heat and Miles his. We were both surprised and thought the other guys held back and that it was all part of their tactics. But then I won the final and Miles came second!”

The next day, the newspaper headline about Marcello’s performance read, ‘Fiasconaro is on the  march’. How right that headline would prove to be.

ROLLERCOASTER RIDE
Crowds started taking notice of the young longhaired Marcello when, at a Coetzenburg meeting, he beat several well-known 400m Springbok athletes, including Danie Malan and the favourite, Donald Timm. “It was a beautiful evening. Coetzenburg was packed and the adrenalin was pumping, but I was really scared and was thinking to myself ‘What am I doing here?’ Everyone had starting blocks except me.”

Marcello was being coached by Stewart Banner, who advised him to stick to the other athletes for as long as he could. “I remember Stewart saying I must just lift my arms and keep going when I hit the final straight. I caught Donald a metre from the tape and just beat him, fi nishing in 46.6. That was the second time I ever ran 400m.”

Italian athletes, who according to Marcello love to measure themselves against the rest of the world, heard of the Italian-South African athlete’s times and so they invited him to run in their home country. “The time I clocked at Coetzenburg would have guaranteed me a place in the 400m relay team for the European Championships.”

The 20-year-old Marcello was fl own to Italy where he lived up to his reputation as he won his first 400m race in Italy. A week later, he won another 400m race at the Italian Championships, recording a time of 45.7 – and breaking the Italian record, which then stood at 46.1. “And so I became a star in Italy. They adopted me very quickly.”

In 1971 Marcello obtained an Italian passport and started living in Italy for six months a year. At that stage he could barely speak a word of Italian, but quickly picked it up from team mates.

At that time Marcello was ranked seventh in the world over 400m. “My coach and I felt my basic speed over the 200m was just not fast enough to become number one, so I started specialising in the 800m. Luckily I had instant success and in 1973 I broke the Italian record fi ve times in a row.”

GREATEST COMPETITORS
In 1973 Marcello travelled to Cape Town to help one of his greatest competitors, Danie Malan, attempt to break the world record.

“I was a pacemaker and went through the fi rst 400m too fast. When Danie was ready to pass me, he was supposed to cough and I would drift into the second lane, but nothing happened. I kept on drifting into the second lane waiting for him to pass me; only at 200m to go he passed me and won in a time of
1:45.9. I cut back and fi nished in 1:46.3, an Italian record.”

A couple of weeks later, Danie beat Marcello for a second time, but then at the SA Champs in Potchefstroom it was a different story. Marcello won his event, the 400m, in a time of 45.6. The hard work was done and he felt like relaxing in the 800m.

“Danie was the favourite, but my coach said I should push and try the same tactics I did when I helped Danie in previous races. I followed his advice and went through the 400m mark in about 50sec. Danie was about 8m behind me and could never catch up. I won in 1:45.2, another Italian record! Danie finished in 1:45.9. It was incredible. Believe it or not, but that victory was one of my most memorable
moments – even sweeter than the world record,” says Marcello, who today remains good friends with Danie.

Marcello kept his form and a couple of weeks later he equalled Dicky Broberg’s South African record of 1:44.7. This joint record stood for 25 years.

A MOMENT IN TIME
The day Marcello broke the world record will forever be etched in his mind. Italy was competing against Czechoslovakia and the favourite to win was the Czech Josef Plachy, who ran in two Olympic finals and was renowned for his huge kick over the last 150m. Marcello and Stewart decided he should go out fast, hoping Josef would stick to him and tire so much that that he would not have anything left for his final kick.

“I ran the fi rst lap in 51sec. In those days it was unheard of to run a fi rst lap that fast. I was hoping Josef would be metres behind me, but as I turned my head he was right behind me! I started sprinting for home with 400m to go. I just couldn’t get rid of him and started worrying about his fi nal kick. But at the
150m mark he just exploded. When you watch it on video, you can see how I keep my pace and how he just trails off.”

Marcello didn’t sleep that night and was back on a plane the next morning. “I remember as I boarded, the captain announced my world record and everyone clapped. Italians are very warm and emotional people.”

THE BEGINNING OF THE END
After his world record, Marcello returned to South Africa for ten days of non-stop partying. “It was an
amateurish thing to do, but today I still see a lot of sportspeople making the same mistake. I drank and partied too much. When I went back for a meeting against the USA, I was beaten by someone I should have easily beaten. I started to overtrain and picked up a stress fracture in my foot. I never really recaptured my form after that.”

Marcello ran at the 1974 European Champs, but picked up further injuries, this time problems with his Achilles. He admits to also getting tired of the constant pressure. “I was racing too often and running too many competitive seasons. I would run in the South African summer and then return to the USA and Italy for their summer season. I overdid it and I never made it to the 1976 Olympics in Montreal. It was great to run when I was on top of my game and passing everyone, but when I started battling with injuries and everything was a struggle, there was no more joy in running.”

Marcello took a year-long break from running and in 1976, started playing rugby in Italy. “I saw it as another little adventure. Our rugby kit was all black and we looked really good, but that was all! We didn’t play very well.” Marcello eventually moved back to South Africa where he married his girlfriend, Sally, and settled down.

LOOKING BACK
Today he has no regrets and is grateful that his time in Italy introduced him to a whole different way of life. His children, Gianna (31) and Luca (29), both speak Italian. Luca is married to an Italian girl and Gianna has degrees in language and translation.

“I admit I could have been a bit more serious about my running, but I had a lot of fun! Maybe I didn’t realise the great gift I had. The best times of my athletic career were not on the track; they were the great experiences I shared off the track with friends I made from America, Australia, New Zealand and Italy.”

Marcello admits he would have loved to run today, especially for the financial gain. He still loves watching all athletics. If there is one thing he does not like about running today, it’s the use of
pacemakers. “It takes the mystery out of running!”

Marcello ran a few marathons in his 40s and he has a marathon PB of 3:02 and a 32km PB of 2:17. These days, he does not run at all as he still battles with nagging injuries “I would love to run a fast 5km. When I see pictures in magazines of people running in a forest or at the ocean it looks so nice! I don’t really like going to the gym or cycling. I would love to still run.”